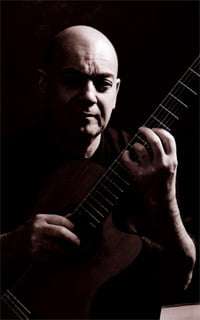 It was simply the word “Iraq” in Ilham Al Madfai’s introduction to his first song “Khuttar” that caused the first whoops and cheers from the well-heeled crowd, predominantly Iraqi exiles. Hardly your usual Proms concert, but this late-night event with this Iraqi doyen of folk-music – dubbed the Baghdad Beatle because of his Paul McCartney imitation – together with a dashing young British-Iraqi oud player Khyam Allami, was pushing Henry Wood’s Proms blueprint to its limit.

“Khuttar” is the signature song of the 68-year-old Madfai and his seven-strong band, comprising everything from zither-like qanun and reedy ney, to full drum-kit and electric guitar – although the latter two were unnecessary especially as the darbuka was all but drowned out. Far from being his own creation, this, like so many of his songs, is traditional which Madfai brings to life with his flamenco-type guitar and comforting vocals. “Happiness is like a rare visitor” repeats the chorus, and the audience was in raptures. It’s the song he started his concert at WOMAD some five years ago which was my introduction to his music, and I wondered how his rousing sounds would transfer from a tiny outdoor stage to the vast Royal Albert Hall.

After two tracks, his band was replaced by Allami and his percussionist Andrea Piccioni. I had seen this pair just three weeks earlier at WOMAD, had played for over an hour, and were, quite simply, breathtaking. At this larger venue they grew slowly into their three-track set, each piece using the maqam – similar to the raga of Indian music, the modal framework on which the melody and rhythm hangs, with regional variations. Allami brings the oud to life, possessing a breathtaking ability to let his fingers fly across the frets with dexterity and speed, especially in their final duet “Maqam Dasht”, a contemporary rendition of the Iraqi maqam. Piccioni really came to the party when he produced myriad tones and techniques as his fingers dash across the taught skin of the tamburello. The two were a stunning double act.

The highlight of the night came when Madfai and Allami performed on their own the haunting duet “Baghdad”, composed by Madfai to the lyrics of Syrian poet Nizar Qabbani. “A thousand books are not enough to express how much I love you, Baghdad”. This was the harmony of mentor and protégé; a man with decades of musical experience, and the ‘youngster’ who this year was the first recipient of the BBC Radio 3 World Routes Academy scholarship. (And, the good news for his new fans is his regular residency in a North London venue from September with Piccioni.) They made a fabulous pair, Madfai’s guitar and vocals in perfect harmony with the outstanding oud player.

That track would have been a hard act to follow, but when the ensemble returned and after the slow, sad love song “Sayeb”, there came the upbeat “Mohammed Ya Mohammed”, another traditional song which Madfai dedicates to his son. The audience was back on its feet, Iraqi flags unfurled, the exiles united. I felt a little like a gate-crasher at a wedding party, but it was certainly a great shindig and all the guests went home happy.