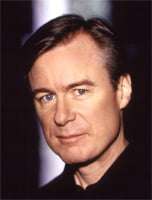 Beethoven’s Fifth was clipped and swift, short on thrills and starved of momentous expanse. It was a curious performance, sometimes muddy-sounding, sometimes over-felicitous in detail (there was no doubting Beethoven’s inclusion of piccolo and contrabassoon in the finale, to the point of being prissy, but trombones lacked presence, whereas the two trumpets were constantly and irritatingly too dominant). Furthermore, the playing was not sufficiently incisive or unanimous enough and the horns cracked a few notes. The first movement – integrated to a fault – was damped down (only Richard Simpson’s oboe soliloquy raised the stakes) and while the second had purposeful tread and ached with humanity there was an overall straightforwardness, blandness even, that quashed the work’s originality.

A performance of this work that Robertson conducted with the BBCSO in the Barbican Hall (on 14 October 2005) made far more impression. As before, the second and third movements were played attacca (with no irritating applause to spoil the moment, which might have happened with a Proms audience) and this latest account had the advantage of antiphonal violins; other than that a groove was found too easily and got stuck in it.

The first half was altogether more impressive. Try and decide which is the more ‘difficult’ and challenging music – Beethoven’s Grosse Fuge or Elliott Carter’s Oboe Concerto.

The former – originally the finale of the String Quartet in B flat (Opus 130) and now-often returned to that role – was given a separate life and is no stranger to string-orchestra amplification (just add double basses!) – and championed by such as Furtwängler, Klemperer, Ansermet and Karajan – as well as transcriptions for other media (there’s one for brass!). We were not informed as to whose version was being used here – Felix Weingartner’s is the ‘usual’ one for strings en masse.

This is uncompromising and visionary music; Robertson and the hard-working BBCSO strings caught well its rigour, vigour and intensity, the latter sustained in the slower middle section and the whole emerging as a remarkable testimony to Beethoven’s contrapuntal skills (and the expressive potency he found in the use of the trill) to create something at once grand, intimate and searching.

Elliott Carter composed his Oboe Concerto in 1987 at the behest of Heinz Holliger. Lasting twenty minutes and playing continuously, this wide-ranging piece is all-related, the oboe sided with four violas and a percussionist, the rest of the (smallish) orchestra consisting of strings, flute, clarinet/bass clarinet, horn, trombone and further percussion.

Carter’s writing is constantly intriguing, the soloist given a hugely demanding part, including multiphonic effects that are, in theory, outside of the instrument’s range. Whether the music is agitated, reflective or capricious, Nicholas Daniel gave a remarkably assured and charismatic performance. Carter’s very precisely and exquisitely gauged invention and scoring (his superb use of percussion never seems gratuitous) was fastidiously realised under Robertson’s direction – one of Carter’s doughtiest champions – to reveal music of rich expression, bracing confrontation and joyful iridescence, all leading to a conclusion of meaningful silence, well respected on this occasion.