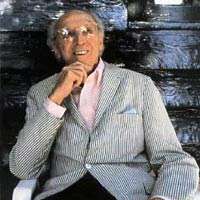 John Adams’s now-regular visits to the BBC Symphony Orchestra have become key events for his enthusiastic band of admirers and less key for the larger audience – here Adams was warmly greeted by a large crowd in the Arena and a significantly less gathering elsewhere in the Hall.

Now in his 60th-year Adams has become as an ambassador for American music in his joint role as composer and conductor much as Aaron Copland used to be, so it was particularly appropriate that this Prom opened with music by him, though Adams’s advocacy of his compatriots extends to Ives (a particular enthusiasm) and Ruggles and beyond US shores to Sibelius.

The BBC Symphony Orchestra plays well for Adams although the timpani in the opening of ‘Billy’ threatened to overwhelm the rest of the orchestra (and were too reverberant in ‘Gunfight’) and some of the detailed writing, especially in the woodwinds, was rather lost. The trumpet and trombone solos, Gareth Bimson and Roger Harvey respectively, were crisp, clear and stylishly delivered. The music’s exuberant moments were well caught in this performance but Adams missed some of the essential poignancy of the score, ‘Prairie Night’ in particular can come across tinged with melancholy, highlighting the waste of life forced on the young William Bonney after a street fight. Adams also missed the swing inherent in this dance music, which is odd given his own writing capability. 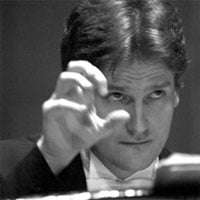 Adams’s piano concerto, Century Rolls (1997), arose in part from an aspect of his vast store of cultural reference, having listened to performances captured on piano rolls, Adams was reminded of Walter Benjamin’s essay arguing that mechanical reproduction completely changed the way in which audiences listen to music. The impending (at the time) millennium determined the title.

The concerto opens with chirping lines for flute and harp which expand across the orchestra and which Adams has compared to Paul Klee’s “The Twittering Machine”; here, and throughout, a good deal of detail was lost due to the Albert Hall’s acoustic sapping sparkle and clarity. Olli Mustonen’s highly visual technique, hands flailing graphically above the keyboard, is unusual, but he seemed to find all the right notes, in the right order, and with them much poetry and delicacy: the unwinding into ‘Manny’s Gym’ (the work was written for Emanuel Ax) was magical, the complex texture gradually evaporating over gently chiming bells until a flute solo introduces Adams’s multi-layered and multi-rhythmic take on Satie. The Ravelian delicacy of the piano arabesques rippling against the orchestral accompaniment was beautifully captured. The rhythmic complexity of the finale (reminding of Tippett) erupted with vitality. 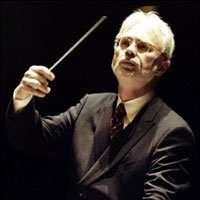 The music for Doctor Atomic Symphony is drawn from his most recent opera. Adams doesn’t avoid controversial or highly-charged subjects, particular in his stage-works and “Doctor Atomic”, whose central character is the American scientist J Robert Oppenheimer, deals with the period leading to the detonation of the first test atomic bomb in New Mexico in 1945 and, musically, marks a new point in Adams’s progression: he has cited Varèse as a specific influence on the orchestral sound in this work.

The opera effectively and powerfully captures the tensions and conflicts leading up to the first detonation – among the team of scientists, engineers and military personnel, and also in Oppenheimer’s own life: his wife Kitty is a major character. In the Symphony, Adams noted that he wanted to do more than extract a suite: rather to take material from the opera and recompose it into a symphony, as Hindemith did with “Mathis der Maler”. The resulting work is in four movements – ‘The Laboratory’-‘The Bedroom’, ‘Panic-Trinity’ – the first two and last two running together and lasting around 45 minutes.

The opera itself opens with a burst of electronic sound; pounding timpani and a driving rhythm recall the opening of Adams’s Harmonielehre. This angry outburst, propelled by percussion, gradually subsides into eerie stillness, using chiming bells again, but to sinister effect, which gives way to the motoric music that accompanies the Laboratory at work. The edginess of the music recalls Bartók’s The Miraculous Mandarin: tense, urban, mechanised music, driven by a relentless pulse. The pace eventually slows and the music becomes sombre, brief solos for trombone, horn, and violin evoke an intimate nocturnal mood, associated with Oppenheimer’s restricted personal life and rare moments of intimacy with Kitty. As the music unfolds shimmering harp, percussion and celesta create a wistful stillness to support a liquid descending clarinet line. The ardent and arching cello melody is another clear reference back to Harmonielehre, but where in that work the melody reaches for and achieves a powerful resolution, in the Doctor Atomic Symphony there is no such resolution, only an uncomfortable dissolution into melodic fragments over an underlying pulse.

‘Panic’ reverts to the rhythmic tension of the opening, drawn largely from the music for Act Two, highlighting the tensions among the team as the deadline approaches through snatches of fanfare on muted trumpets, followed by solo tuba and a high unsupported line in the violins that spills over into the final section which contrasts passages of ominous near-silence punctuated by tuned gongs and shimmering strings with bursts of powerful propulsive orchestral activity; the Symphony ends abruptly, the final rhythmic outburst stilled by a single convulsive chord.

On a first hearing Adams’s new work seems too long, if interesting.