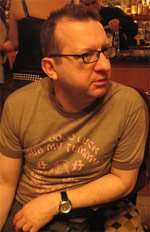 In his laid-back talk with Andrew McGregor, Mark-Anthony Turnage spoke of his influences being Stockhausen, Xenakis and Henze and the encouragement given him by Oliver Knussen. Turnage stated that the Second Viennese School also influenced him and this was evident in the chamber works played here; indeed Schoenberg (as well as Schubert) seemed to be the key influences.

The genius of Turnage’s An Invention on ‘Solitude’ – which was inspired by Billie Holiday’s rendition of the song – is the way he integrates the clarinet with cello and piano with such seamless blending and melting of sound as it the clarinet were a string instrument; conversely, the piano and cello complement the clarinet as if they were one instrument. Furthermore, Turnage makes the players sound as if they are sometimes in stasis as if sound itself is static: this an extraordinarily original and inventive work and it was performed with great sensitivity and care.

Cortège for Chris, written in memory of cellist Christopher van Kampen, is an extremely intimate and moving piece with the cello taking on a slurring and sulking sound, locked in silent space; the cello shy and withdrawn. Finally, A Fast Stomp was a tour de force giving the sensation of dizzy and drunk dancers; a highly explosive and anarchic composition sounding as if it is trying to outplay and get outside itself! 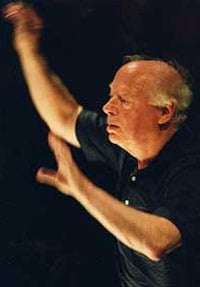 Following the pre-concert talk and performances, the Chicago Symphony Orchestra returned to the Proms, this time under its Principal Conductor Bernard Haitink and began with more Turnage, Chicago Remains (2007). The highly evocative and concentrated 16-minute work was initiated by the cityscape of Chicago, evoking its seedy and underworld side rather than its sheen and glitz. Although composed for large forces the score is intimate and sparse rather than being a flashy and bombastic showcase.

Most striking is the writing for woodwind, which has an eerie raucous texture suggesting a subterranean species speaking in an alien tongue. Indeed: this is Chicago’s ‘Twilight Zone’, murmurs and mutterings continuing whilst the city sleeps. Turnage here has developed a unique palette, colours and tones akin to Impressionism rather than Expressionism. Chicago Remains shows Turnage to be a master orchestrator.

Today the Chicago Symphony Orchestra has more of a European sound than under Fritz Reiner and has now lost the brutish and brittle aspects developed during Solti’s tenure. I have heard Bernard Haitink conduct Gustav Mahler’s Sixth Symphony many times over the last 30 years, which has had a regimented consistency of being analytical and clinical and lacking drama and emotion. What is new is Haitink’s slowing of tempos, which has a detrimental effect. The first movement march simply did not have the essential forward thrust required and lyrical passages tended to come to a standstill resulting in a loss of concentration and drive. The Chicago Symphony played superbly albeit with a few fluffs from the brass.

The scherzo (placed second) – allegedly depicting children at play – worked better with Haitink bringing out a sinister and darker mood than is usually heard and securing exquisitely pointed and expressive woodwind solos. The Andante moderato was embarrassingly slow and strangely devoid of emotion: on a few occasions the orchestra showed signs of stress in staying with the slowness concentration evaporated.

The colossal finale should sound like a struggle between life and death: an event in itself. Again, largely due to tempos, there was no thrusting momentum or a sense of struggle and urgency. Rather it was well mannered and manicured, polished and polite. The two (rather than three) hammer-blows were hard and loud but rather oddly lacked power and impact. The playing was immaculate but there was little tension or drama.