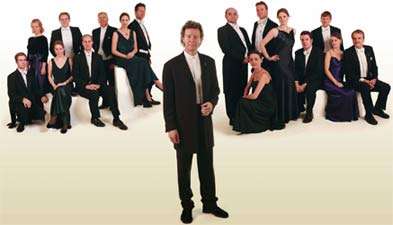 The pomp and festive brilliance of the four Anthems Handel wrote for the 1727 coronation of George II makes them the ideal basis for a concert marking the 250th-anniversary of the composer’s death. The interesting programme, with Harry Christophers and The Sixteen (a title which now encompasses both choir and orchestra, each of which greatly outnumber sixteen members), was filled out with a couple of instrumental crowd-pleasers and vocal music from the opposite ends of Handel’s career.

‘The Arrival of the Queen of Sheba’ (not Handel’s title – apparently we have Thomas Beecham to thank for that) proved to be a slight opener, not helped by Christophers’s crisp but perfunctory account; almost any of the opera or oratorio overtures would have been a better choice to get the evening underway.

The four “Coronation Anthems” were spaced out throughout the concert, starting, as Handel originally intended, with the least overtly ceremonious, “Let thy hand be strengthened” and progressing to the grandest (and most well-known), “Zadok the Priest”. Christophers and company produced impeccably articulated accounts with a bright, well-focused sound. The period-instrument orchestra’s idiomatic elegance was impressive, as was the choir’s diction and contrapuntal agility; the grand final chorus to “My heart is inditing” was delivered with an exciting sense of occasion.

But as the evening wore on, it became more apparent that Christophers didn’t have a great deal to say about the music beyond maintaining its refined baroque grace. The individual character of each Anthem was not brought out, and the performances rarely caught fire. What should have been the grand climax turned out to be the nadir: Handel’s spine-tingling orchestral introduction to “Zadok” was regal and poised but entirely devoid of tension or crucial sense of momentum. The impact of the chorus entry, though powerfully sung, was fatally undermined.

It was a rare treat to hear the F major Organ Concerto with its original choral finale. But, though technically assured, Alastair Ross’s renditions of the solo passages (on an authentic pedal-less chamber organ) were disconcertingly lumpy.

The concert came alive during the two contrasting appearances of creamy-voiced soprano Carolyn Sampson. The indolent self-indulgence of the title role of Handel’s opera/oratorio hybrid “Semele” was embodied wonderfully with artless vocal beauty and delight. Less fun, but no less well-sung, was the Corelli- and Scarlatti-influenced “Salve regina” from Handel’s apprentice years in Italy. Sampson gave a radiant account, fluid in the brilliant coloratura and serene in the work’s intimate coda that tapers off reflectively into the ether.

Overall, however, Christophers’s non-penetrative direction ensured that this Prom was an underwhelming tribute to a great baroque master. There’s still plenty more Handel to come this season though, including “Samson” and “Messiah”, so all is not lost…