What has become a regular event of the BBC Proms season, the day-long celebration of a particular musical theme, was taken this year by the “Indian Voices” concerts: Khyal and Kerala traditional classical music in the morning (then Indian Voices in the Park) and an evening of Bollywood featuring Shaan. 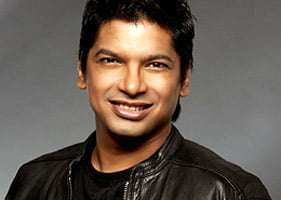 A Royal Albert Hall that was less than a quarter full greeted some of the world’s best musicians of the genre for the morning event, whereas the evening concert was full to the gunnels.

Asima, a male choir and percussion ensemble opened the day’s festivities, in a weekend that also celebrated Indian Independence Day. Entering from the side of the Hall, though effective visually was aurally confusing as sound was coming from the speakers on the stage. Nevertheless, Asima – Sanskrit for ‘beyond boundaries’ – and the group effortlessly fused ancient chants with western harmony.

After what seems an inordinately long wait, sarangi-player Pandit Ram Narayan, with his daughter Aruna Narayan, and accompanying instrumentalists on tabla and tanpuras, began. An elderly man now, Pandit Ram Narayan’s name is synonymous with the sarangi, having elevated it from its traditional role to that of a solo concert instrument. In his two-piece set, which lasted a little over thirty minues, the intricate melodies that he weaved over the drone laid out by the tampuras were hypnotic. Starting simply around one or two notes, the improvisation became more varied as more notes from the raga (at its most basic, an Indian musical scale or tonal framework) were employed.

The music for the morning’s Prom was from the southern Indian areas of Khyal and Kerala. These regions are associated with Carnatic music, which places a greater emphasis on voices; most compositions are written to be sung, and even instrumental music should be performed in a singing style. Manjiri Asnare Kelkar is one of India’s most celebrated vocalists. Joined by Sudhir Nayak on the harmonium, who stayed to accompany the Mishra brothers, Manjiri’s melismatic singing followed a similar structure to that of Pandit. Often starting on one note she varied it and then returned in a supreme act of breath-control. As with all vocalists throughout the day, Manjiri kept track of the tala (rhythmic cycles) through the use of her hands, which gave a fascinating insight into the structure of the music being performed; a ‘down beat’ was marked by a downward motion, much as an orchestra conductor might do. 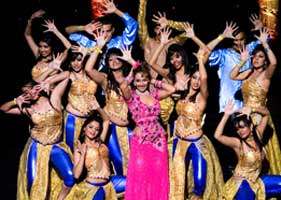 Brothers Pandits Rajan Mishra and Sajan Mishra are from the city of Varanasi in the southern Indian state of Uttar Pradesh. Learning from their father and uncle, their vocal dexterity and perfect intonation are attributes that have made them two of the most highly regarded musicians in India. In 1979 the brothers received the coveted Sanskrit Award for musical excellence from the Prime Minister of India and are much in demand throughout the world.

Ending the morning Prom, Asima returned for a fusion of classical Indian vocal music with western harmony and rhythm. Almost as a comical symbol of modernity a Roland keyboard replaced the drones of the two tanpuras; only the briefest of human intervention was needed to start and stop it!

The group’s director, Devissaro, is an Australian composer and musician who has lived in India since 1980. His compositions has a high regard for Indian music and culture, though with its roots in western harmony it spans the gap between classical and popular culture in India, much as so-called ‘cross-over’ musicians do.

Glorious sunshine decorated the afternoon events in Kensington Gardens, and a party atmosphere ensued. With Bollywood dancing and kite-making accompanied by the BBC Proms Family Orchestra (renamed the BBC Proms Bollywood Family Orchestra) this free event was a relaxing antidote to the morning’s concert and included Asima aiming at the popular market, playing a set more Bollywood than Shaan. Other performers included folk musicians and dancers from Rajasthan and Gujarat.

“Indian Voices 2 – Bollywood”, as it was billed, returned us to the Royal Albert Hall. Shaan, a youth icon, had been rehearsing all afternoon, but he managed to forget the songs’ running order. This did not seem to matter to fans. To his credit, Shaan took every opportunity to place his concert as part of the BBC Proms season. He is a gifted musician as well as charismatic and welcoming of all. His song-list was lengthy and wide in style. Almost inevitably with the huge success of “Slumdog Millionaire” and the Pussy Cat Dolls’ revamp of the music that accompanies the closing credits, “Jai Ho” had to be included. His performance was flawless. Shaan, backed by The Groove and joined by Indian vocalist June Banerjee sang well into the night to conclude this incredible spectacle celebrating centuries of music from the Indian subcontinent.