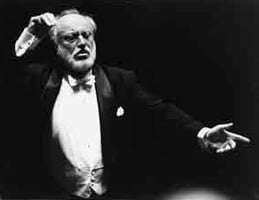 This day marked Kurt Masur’s 80th-birthday and culminated in a Proms concert that united the two orchestras that Masur currently heads up – as Music Director of Orchestre National de France and as Principal Conductor of the London Philharmonic, the latter appointment shortly to become an honorary position when Vladimir Jurowski takes over as the LPO’s ‘main man’.

Tchaikovsky’s Serenade was given with at least 70 musicians, including 12 double basses high and somewhat adrift at the back of the platform. Masur led a no-nonsense account, albeit one that was also affectionate and contoured, if lacking expansiveness in the opening movement and playfulness in the ‘Waltz’. The ‘Elegy’ dug deep without indulgence and Masur effected a beautifully timed attacca into the finale (which hopefully confused the irritating few applauding between movements) and which enjoyed clarity rather than bluster and a fine sense of culmination. The orchestras’ strings did their maestro proud.

It’s all too easy to inflate Bruckner’s E major Symphony beyond itself – with languorous speeds, brazen fortissimos and full-blooded timbres. The work’s secrets are most gratefully revealed when, as here, the conductor opts for flowing speeds, dynamic variance (the loudest being reserved for truly climatic moments) and transparency of detail. For all the potential force at Masur’s disposal, he retained his integrity for orchestral balance and discriminate volume. The opening was magnetically introduced on the most slender of sounds and most tender of phrases, a sense of direction uppermost as the symphony unfolded inevitably and organically and with light, shade and clarity. The entry of the timpani (here two players) late into the movement was a suspenseful and thunderous moment.

The programme book’s presentation of this work left something to be desired. There was no mention of which edition of the work was being performed; and, regarding the second movement Adagio, Stephen Johnson’s note was not particularly revealing. Concerning the disputed cymbal clash (and triangle and timpani for that matter) that usually caps the climax, it has long been regarded that Arthur Nikisch, who conducted the work’s first performance, added these instruments in. It may be that the additions were suggested by the Schalk brothers (presumably the “two friends” that Johnson refers to). In a letter from Joseph to Franz, the former informs his brother that Nikisch had included the cymbal clash that they had wanted. There seems little doubt that Bruckner himself notated the extra parts – on a scrap of paper that was added to the manuscript! – but we don’t know if he did so under duress. There is the added conundrum that someone, possibly Bruckner, later crossed through the percussion lines adding the words “gilt nicht” (invalid). Although the very first publication included percussion, Robert Haas in his (later) Edition removed it (including timpani) and, later again, Leopold Nowak, in his version, reinstated it! Haas also favoured less tempo manipulation and ‘gentler’ dynamics than Nowak. Some conductors who play Haas include timpani. Masur went with Haas in every particular: they are of one mind and having no percussion at this ‘controversial’ point seems entirely apt and was certainly in-keeping with Masur’s flowing and contrasting view of the movement; furthermore, there was no denuding of Bruckner’s grieving for Richard Wagner (who died while the Adagio was being composed), Wagner tubas being especially baleful.

The scherzo had both splendour and propulsion, the trio a gentle refection with only minimal slowing; and the finale – which Johnson asserts is the shortest movement of this symphony’s four! – found Masur unfolding his most moderate tempo (in context, but still nearly four minutes longer the scherzo) giving weight, dignity and resolution and making this finale unusually well-balanced with what had gone before: take an eternity over the first two movements and the remaining ones are dwarfed; here Masur’s just sense of proportion paid many dividends in a performance that was virtually ideal.

We weren’t done. No cake or a chorus of “Happy Birthday”, but there were cymbals and a triangle on the platform (ironically!) and also a harp. We had to wait until the Adagio to hear if the percussion was needed, but a harp has no part in the Bruckner, so an encore was ‘advertised’ early on. Masur and his two orchestras gave a sprightly and shapely Prelude to “Die Meistersinger von Nürnberg” – Wagner alive and well – and not as pompous as he can made to seem. Great conducting!