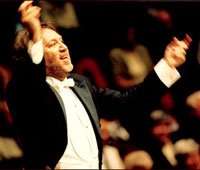 Riccardo Chailly strode vigorously up to the podium, purposive and thickly bearded. Facing the bust of Sir Henry Wood, the founder-conductor of the Proms, he looked every inch his re-incarnation.

The Overture for “Coriolan” did not live up to this expectation. The renowned Leipzig Gewandhaus Orchestra sounded distant, both in sound and emotional engagement. The beginning was quite interesting – the clearly delineated sequence of vigorous, terse interjections following the sombre introduction: Beethoven seemed to be talking to himself, in grunts. The overture’s urgent, romantic theme whisked past briskly once or twice, tuneful but decidedly uninvolved – a far cry this being “one of Beethoven’s most intense expressions of raw emotion.”

Viviane Hagner (originally it was Sergei Khachatryan advertised for this Prom) has a small, cool style. She produces a refined and controlled sound from the Stradivarius that the Nippon Foundation has lent her. She has yet to find – or to display – the rich, warm tone that I am sure is available to her touch. Instead, she plays with a steely sensitivity suited to Mozart. 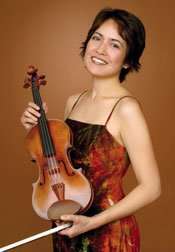 This was, in effect, a chamber performance of Beethoven’s mighty concerto. One could sense Chailly restraining the orchestra so as to complement Hagner’s withdrawn approach. Nevertheless, there was cumulatively something monumental to the first movement – the music had been robust if unimpassioned. The slow movement suited Hagner best: serene, unhurried and limpid – crystalline. She tripped lightly into the finale with sparkle and grace, close to evidencing a sense of fun – including a delicious conversation with the bassoon.

With Beethoven played in this humour, how would Brahms sound? Would we move from the largish modern orchestra’s restrained accommodation to a more-lush response?

At first, there was little sign of change. The opening theme, cool and briskly unattached, led into a remarkably clear delineation of Brahms’s themes and development. Chailly also clarified the orchestration commendably, giving effect to a number of small phrases often passed over – Romantic adjuncts or lightly-scored underlining. Overall, though, the movement lacked consequence. Chailly seems to see the first three movements as a sequence of varied preludes to the final passacaglia.

Brahms’s instruction for the second movement – Andante moderato – asks for a flowing of melody. The current of this stream was quite sturdy, with no Romantic dallying. The beauty never dragged. The playing, limpid again, was very fine, with notable contributions from the horns – smooth yet unostentatious. The scherzo was fast, light and exciting. It evoked the Viennese spirit of the operetta. There was no sense of laboured jollity from gods playing with thunderbolts.

The passacaglia finale was brisk: too speedy to achieve the culminating effect that Brahms was surely seeking. There was nothing monumental about the (slightly modified) Bach chorale heard at the outset, nor in the more sober of the variants that followed. The instrumentation missed being striking. The performance lacked grandeur. That said, many byways gave pleasure – especially the extended flute solo and the youthful vigour of the timpanist.

For an encore came Brahms’s Academic Festival Overture, which Chailly impishly introduced: “you think we’re going to play a Hungarian Dance!” This, resplendently, was the highlight of the evening. At last, having sat through tame and uniform performances of major creations here was the ringing, dynamic, colourful, exuberant and vibrant tones of the Leipzig Gewandhaus Orchestra in its stride.