This was an intriguing idea – two pieces intended for liturgical usage for the same occasion intertwined with each other – though I am not at all sure that, ultimately, it came off. The disparity of musical styles some 400 years apart from each other were somewhat difficult to adjust to. Besides which there were some reservations concerning the execution of the Manchicourt “Mass”.

Both works were intended for the feast of Pentecost – when the Holy Spirit reportedly descended upon the Apostles causing them to speak in “tongues” (i.e. different languages). Messiaen’s organ meditations reflect upon this, whilst Manchicourt’s “Mass” setting would have been deployed as the sung portion of the liturgy on Whitsunday.

Messiaen provides five movements, the first four being largely ruminative in character. Aside from the composer’s characteristic references to birdsong, there are hints of Plainsong and 12-note sequences reminiscent of Schoenberg. Indeed, in the delicacy and abstruseness of the writing there are places – especially in the fourth movement – ‘Communion (Les oiseaux et les sources)’ where one might, without too much difficulty, imagine that had Webern or the young Stockhausen written solo organ music, this is what it might have sounded like. 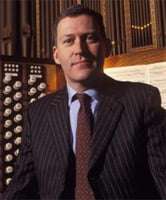 Throughout, James O’Donnell provided suitable – and subtle – varieties of registration, conjuring up the atmosphere of the composer’s superscription at the head of each movement. Finally released from meditative and contemplative matters, in the fifth movement, the ‘Sortie: Le vent de l’Esprit’, the organ was let off its leash in a veritable torrent of sound. Toccata-like passages were dispatched with terrific virtuosity, and Messiaen’s work was concluded with considerable exhilaration and panache.

Between the movements of Messiaen’s work for organ, the BBC Singers under the sensitive direction of Andrew Carwood performed the segments of Manchicourt’s “Missa ‘Veni Sancte Spiritus’”.

The music itself is austere in character, and this was reflected in a performance that had a somewhat unyielding quality. The BBC Singers – it goes without saying – is an extraordinarily talented ensemble, but, collectively, the members did not provide the right – or authentic – timbre for this particular repertoire. Dynamics (though these would, largely, have been conjectural) were inflexible, and a certain monotony of sonority prevailed. The brief passages for solo voices were sensitively delivered but, as a whole, the choir – 24 in number – was too large. A more intimate approach – not to mention a less vibrato-laden tone – would have enabled the music to speak more freely and expressively.

The contrast between Manchicourt and Messiaen was dramatic indeed, and perhaps a (French?) “Mass” of more recent vintage might have stood alongside Messe de la Pentecôte to better advantage.