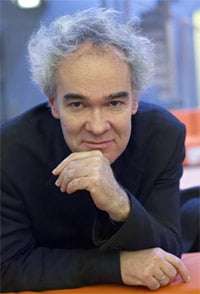 For this Prom, Thierry Fischer put the BBC National Orchestra of Wales (of which he has been Principal Conductor for three seasons) through an ambitious three-part programme focused mainly on French music. This included a first outing for the revised version of Sillages (Trails) by the Swiss composer Michael Jarrell – though its 1995 incarnation is also the reworking of a piece that featured electronics alongside flute, oboe and ensemble – Congruences – which emerged over two decades ago.

Highly respected in mainland Europe as a composer and teacher, Jarrell (51 this year) is relatively unknown here. During the “Composer Portrait” beforehand, musicians from the Royal Northern College of Music gave an insight into his evolution – with its antecedents in the later music of Pierre Boulez and the more anarchic sound-world of Klaus Huber (a totemic post-war figure himself little known in the UK). Violinist Michael Gurevich and cellist Philip Higham gave the UK premiere of Nachlese II while percussionist Toby Kearney seemed equally at home in Assonance VII – the tendency to number in series a reminder, perhaps, that Luciano Berio was also a formative influence on Jarrell’s musical thinking.

It must be said, however, that main concert’s premiere is unlikely to constitute any real breakthrough. Not that this is the fault of the music, whose electronic origin is reflected in an orchestral texture of undoubted yet never clinically-achieved lucidity and poise. Against this, the trio of wind instruments projects effortlessly, though it was perhaps the composer’s concern in extending the role of flute and clarinet that lead to what could well be an interpolated ‘cadenza’ which lowers expressive tension in the latter stages of the first movement as well as risking a formal imbalance with its successor. This latter deploys the motivic components to more consistently dynamic accord, in which a more animated orchestral response is capped by decisive chords that see the work through to its close.

If it achieves nothing more profound, Sillages gives pleasure by its sheer command of instrumental timbre. It was scrupulously well realised by the soloists (François Leleux a ‘first among equals’), expertly directed by Fischer and deserved more than its decidedly lukewarm reception; Elgar’s fabled remark on audience reaction at the premiere of his Second Symphony rarely seeming more apposite.

Admittedly the work did feel slightly out of place in a context of Berlioz at his most demonstrative. Especially when Fischer had opened proceedings with a scintillating account of the overture to the early (though not, as is often supposed, abortive) opera “Les francs-juges” (1826). From the baleful brass fanfares near its opening, via the indelible violin melody and ominous cross-rhythms of its main section, to the rousing apotheosis, this was truly a performance to reckon with – besides confirming that, while its composer had not yet discovered Beethoven, Berlioz’s idiom was virtually in place.

Nor was there anything much lacking in a rare revival of the Symphonie funèbre et triomphale (1840). At its Proms premiere 26 years ago the work was heard in its later guise featuring strings and chorus, though the original incarnation for massed woodwind, brass and percussion has no less impact and is arguably truer to the work’s commemoration of the tenth anniversary of the July Revolution. Certainly the ceremonial, even militaristic overtones are made the more so now its context in the tradition of French revolutionary music is all but lost to us.

Fischer kept the starkly monumental ‘Funeral March’ on a relatively tight reign, before allowing the trombone soliloquy of the ‘Funeral Oration’ (eloquently rendered by Donal Bannister) room to unfold. The ‘Apotheosis’ had a driving energy that offset any overkill, aided by unfailing textural definition as well as a spatial balance that ensured the final peroration made the most of the Royal Albert Hall acoustic. A performance that was as much of an event as the work requires without losing sight of its overtly musical qualities: hopefully it will not have to wait another quarter-century for its next Proms revival.

If the return to more conventionally arrayed forces in Beethoven’s ‘Eroica’ Symphony risked seeming anti-climactic, Fischer ensured otherwise with a charged account that readily brought out the work’s basis in human conflict and its musical resolution. The first movement was shorn of its exposition repeat, so enabling the thematic continuity within its expanded sonata-design to come through the more strongly, as well as placing greater formal and expressive emphasis on the development and coda. The ‘Marcia funèbre’ was affecting without ever becoming a vehicle for that mass outpouring of grief which is surely not intended, and to which the quicksilver wit of the scherzo (horns notably secure in the trio section) was an admirable foil. Just occasionally in the finale Fischer seemed to be selling the music’s elemental quality short, but he ensured the more measured later variations never seemed sluggish while the unbridled, indeed ‘Promethean’ vitality of the coda carried all before it.