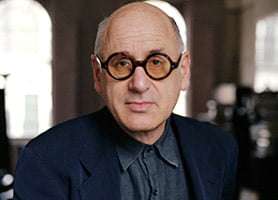 This was Michael Nyman’s first appearance at the BBC Proms and looked at his musical relationships with two of this year’s featured composers, Purcell and Haydn, providing an effective stylistic contrast with settings of Paul Celan and ‘Memorial’ from one of his many film scores.

In the 1960s, Nyman studied under Thurston Dart, following which he completed performing editions of Purcell’s Catches and Handel’s Concerti Grossi (Opus Six). Revisiting the music of these two composers, The Musicologist Scores was no own goal. Its thematic material is subject to crisp, cogent development over the course of twenty minutes, given through bright instrumental textures. Much of the score is cast in an opulent D major, Nyman’s fulsome and obsessive tonic chord on the piano setting a chugging rhythm from which the kinetic energy of the piece is derived. Above this the music is less mechanical, with often-charming melodic fragments passing around the twelve-piece ensemble. Development of these melodies is effectively incremental, the gear-change to a slower central section sensitively handled. As the music gathers itself once again, toccata-like figurations returned with a flourish, the exuberant finish rounding off one of Nyman’s most impressive recent compositions.

The decision to amplify the band proved a mixed blessing, with subtlety and rhythmic clarity sacrificed for volume and energy. For the four extracts from “The Draughtsman’s Contract” (inspired by Purcell) the music fair leapt from the speakers. This suited the brightly polished ‘Chasing Sheep is Best Left to Shepherds’, but was less suited to the thoughtful repose of ‘The Disposition of the Linen’. A pleasing rasp was added to the undercarriage of the band sound from saxophone and trombone, and Nyman’s left-hand added a brittle edge from the piano to the interplay.

The six settings of Paul Celan are among Nyman’s most impressive achievements, so it seemed a shame to play just two of them. They show Nyman as a serious vocal composer, very different from the more consonant language of the film music. Anu Komsi was also amplified, but used her microphone with great sensitivity as she sang powerfully in ‘Blume’, then twisting the initial warmth felt by the instrumentation at the start of ‘Psalm’.

She then returned to hit the highest notes of ‘Memorial’, the notes impeccably judged, save for an unfortunate false start. This New Orleans-style lament is characterised by wailing trumpet and saxophone; the slowing of the tempo near the end providing a rather obvious signpost for the trumpet melody to return. The sweeping violin tune of the start was interfered with by the amplified forces, but the end found a satisfying balance and resolution.

As an encore Nyman alone offered ‘Franklyn’ from his score for the film “Wonderland”, the solo piano helping to illustrate how deceptively simple music can still paint vivid pictures.