Orchestra of the Age of Enlightenment
Rachel Podger (violin) 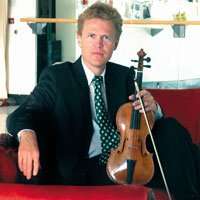 It must be over 30 years since I last attended a Promenade Concert at the Royal Albert Hall. Then the dowdiness of the venue, its antiquated procedures, not to mention the stifling heat inside the auditorium in mid-summer did not encourage me to return. Both the Orchestra of the Age of Enlightenment and the Freiburg Baroque Orchestra were more than ten years from foundation, though the principle of performance of pre-classical music on ‘period’ instruments was alive and progressing.

The Hall has undergone an admirable refurbishment in the present century, based on the idea that the building itself is a treasurable heritage site that needs to be preserved. Musically, the Proms has moved on in a way which is well-known and widely acknowledged. The Proms represent the Reithian principle of education in public broadcasting. At a time when classical music’s share of attention from the mass media has been overtaken by various popular genres the BBC’s commitment not only to broadcasting a wide range of it but also to supporting live performance is heartening. The planners will always attract controversy but the Proms rejected a safety-first strategy more than 40 years ago to resemble the valve-less horns and trumpets heard at this concert: thrilling but risky.

The engagement of two ‘authentic’-instrument ensembles for this concert epitomised the triumph of such an approach and was rewarded with a ninety percent-plus attendance. Some of the audience will doubtless have seen a competitive element in the ranging of the two bands in facing blocks when combined. By the end they are likely to have declared a draw between two bunches of extraordinarily gifted performers.

Combined they were for one of Handel’s Concertos a due cori, with Rachel Podger directing. The composer’s predilection for vocal music is represented here by the preponderance of borrowing from existing oratorios. The result is not a disenchanting re-heating of yesterday’s dish but an exhilarating medley, with the adaptation of “Lift up your heads” and a melancholy Largo framed by pairs of movements that feature the woodwinds and horns displaying their feathers. The fifth movement was a stunner: an initial string unison statement, subsequently circling powerfully throughout in the bass while the other forces presented a bountiful range of musical ideas, now antiphonally, now together, in showpiece fashion. The sixth showcased the oboists from each orchestra, alternately exchanging melodic ideas and supporting each other in harmony.

The OAE then made its solo appearance in an arrangement for strings by Catherine Mackintosh of pieces by Purcell. The lightweight forces did seem to be somewhat lost in the vast reaches of this hall. The two pieces from “Abdelazar” tripped airily enough but the G minor Overture made limited impact. Nevertheless, the glory of this item was the Pavan, an extended piece for just two violins and cello, often playing at little more than a whisper; the intensity drawn from this music by the three instrumentalists had the audience hanging on every note. In complete contrast was Mackintosh’s arrangement of the Liliburlero jig, with the tune garishly presented by two cellos and double bass. The players occasionally squeezed some dissonance out of the harmonic writing.

The orchestras combined again to accompany the vocal items. In rather commercially calculated casting Ian Bostridge and the highly promising, competition-winning lyric-soprano Kate Royal, soon to have the first fruits of a recording contract with EMI published, were engaged to give what were really cameo appearances totalling but 15 minutes. Bostridge is a highly skilled singer, deploying his very English, soft-textured and flexible voice to decorate the da capo section of ‘Love sounds th’alarm’, and enunciating his words with consistent clarity. Royal’s more substantial weight of tone was accompanied by a confident manner in the song from the ‘Queen Anne Ode’, bringing a touch of operatic glamour to proceedings. When they came together it was the tenor who strangely seemed to have the higher voice. They delivered the lines of ‘As steals the morn’ with equal sensuousness, above the plush cushion of strings, and then rejoiced uninhibitedly at their escape as Acis and Galatea; here Bostridge showed spontaneous theatrical skills in embodying his character.

In the Telemann Suite the solo roles passed to the respective orchestral leaders. Its finely contrasted movements tested their technical and expressive range. The ‘Apertura’ found them vying to outdo each other in animality, while in the ‘Passepied’ they indulged in a daintier contest. The final pair of ‘Minuets’ was a battle of tactics, with the two contestants as solo voices and in dialogue alternating caressing lines with aggressive ones.

Richard Wigmore’s programme note argued the case for augmenting the winds in the ‘Fireworks Music’ with a body of strings. Having grown up with Mackerras’s 1970s’ all-wind recording I tend to find the passages allocated to strings rather like soft tissue deputising for muscle and bone. What threatened to make matters worse here was the reduction of that very wind-band from Handel’s figures of 24 oboes, 9 horns, 9 trumpets, 12 bassoons and 3 sets of timpani by a third or even more. In the event, the strings served to shift the focus on occasions, to the advantage of the music as a whole. Their role in the ‘Largo alla siciliana’ prevented the piece from cloying, as it can do with massed oboes. On the other hand, no-one could have wanted more rhythmic verve or power in ‘La Réjouissance’ or more foot-stamping exhilaration in the finale. This was a perfect Albert Hall piece and was followed by some striking Telemann by means of an encore.