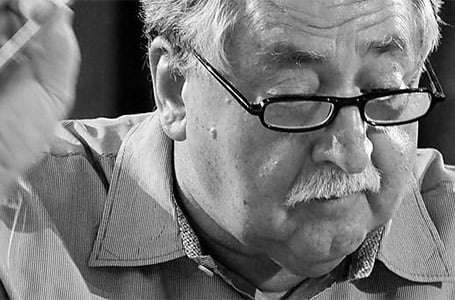 As part of this year’s BBC Proms focus on Polish music, Paul Van Nevel and the Huelgas Ensemble devised a programme drawn from the 16th-century and introduced a whole section of musical history maybe previously unknown. By interchanging his resources of nine singers and six instrumentalists, Van Nevel oversaw a selection with natural peaks and troughs, moving between restrained solo numbers and fuller pieces.

The 50-minute uninterrupted recital began with a poised performance of the respectful glorification Chwała tobie, Gospodzinie, the first known setting of a Polish text. This was followed by Cracovia civitas, a sober setting in praise of the city of Cracow, staged with the female singers left, right and centre. The soft tones of the accompanying recorder trio acquired a more steely edge when Susanne Baumann’s viola da gamba was employed. Despite the irregular rhythms the melodies were an instinctive unison.

The full choir assembled for Dixit angelus ad Petrum by Johannes Wanning (1537-1603), a Dutch composer who settled in Poland. His setting of dialogue between God’s angel and St Peter shared distinctive rhythmic figures, again impeccably performed. Clarity was the watchword of the same composer’s Et valde mane, a depiction of the resurrection given appropriately bright and treble-rich music. Mikołaj Zieleński, whose dates are unknown but thought to be very early 17th-century, then explored more bass-rich sonorities in Mihi autem nimis (But to me, O God). There followed a short suite of three charming Polish dances by the German Christoph Demantius (1567-1643), which benefited from the percussion of Silke Jacobsen, playing recorder and drum simultaneously. The ‘Intrada’ had a pleasing emphasis on the third of its four beats, while the six-foot-high recorder used by Peter De Clercq gave a sonorous bass to ‘Chorea polonica’. Finally the group played a propulsive ‘Gaillarde’.

The vocalists returned for the resilient motet Lamentabatur Jacob by Luca Marenzio (1553 or 4-1599), featuring a powerful harmonic resolution, while the basses excelled in the same composer’s Solo e pensoso I più deserti campi (Alone and lost in thought, I wander), reaching a bottom D without any concern. The closing couplet of works by the Pole Krzysztof Klabon (c.1550-1616) provided the most striking music. Słuchajcie mnię (Listen to me) was simply beautiful, the restrained singing of Poline Renou perfectly complemented by the softly played violone of Matthieu Lusson. Paul Van Neven’s masterstroke here was to continually vary the layers of the song, so that alto Sabine Lutzenberger and bass Carsten Krüger dovetailed beautifully with Renou throughout. Finally all fifteen performers united for the exotic harmonies of Tryumfuj, wierny poddany, which had both grace and power. The use of a bass crumhorn, again calling on the multi-talented Jacobsen, lent extra colour to the opening.

There was no encore, for the simple and rather refreshing reason that in its 42 years the Huelgas Ensemble has never given one, a decision thoroughly vindicated here.