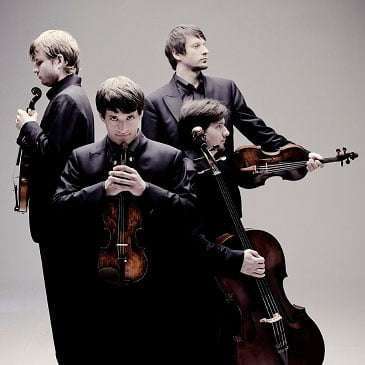 With their affectionate performance of Webern’s Slow Movement, the members of the Apollon Musagète Quartet brought forward its likely status as a love-song to his cousin Wilhelmine Mortl, whom the composer married in 1911 – six years after the completion of this substantial fragment. The tender beginning is reminiscent of Brahms, but the heady harmonies give away the later composition date. Gradually the gently hued romance acquired more definition, but the soft-centre heart of this interpretation was always visible.

There followed the European premiere of Colin Matthews’s Fifth String Quartet, written in honour of the 75th-anniversary of the Tanglewood Festival, where it received its first performance last month. The composer introduced the piece as “shorter, simpler and more compact” than previous such works. Structured in a single, twelve-minute movement – the music grows from a very small cell, initially reluctant to make itself known through the muted instruments, and silences are every bit as meaningful as the notes themselves. Gradually a surer footing is acquired, and there is only a brief period of assertiveness before quietness returns. Yet this is an intense and dramatic piece of music, Matthews’s imaginative use of pizzicato heightening the tension, and bringing to mind Bartók. Hopefully it will not be long before Matthews adds a Sixth to his canon.

The third-numbered of Beethoven’s Opus 18 set, if the first to be written, completed PCM3. Composed when Beethoven had been closely studying Mozart and Haydn, these works are in a sense derivative, but could not be by anybody else, and contain music of humour, impetuosity and drive. Again the Apollon Musagète members preferred to concentrate on the softer side, but this paid dividends with the sweet tone afforded the first-movement theme by Paweł Zalejski. When the music reached its development there was more cut and thrust, but the gentler approach carried over to the Andante also, where glimpses of Haydn’s ‘Clock’ Symphony (101) and ‘Bird’ String Quartet gave way to a vigorous central section. The brusque Scherzo, over in a flash, could have used more contrast between its sections, though the economical use of vibrato in the minor-key Trio was effective, as was an exaggerated rallentando in the Scherzo section itself. The finale, too, could have brought out more of the young Beethoven’s daring spirit, but it did enjoy the stream of notes afforded to Zalejski and sent-up the surprise ending beautifully.

A performance-note of interest – the musicians positioned themselves in an ‘L’ shape, with Zalejski facing across the platform while his three colleagues, in a line, faced forward. It increased the projection to the audience but did remove some of the intimacy of chamber music.