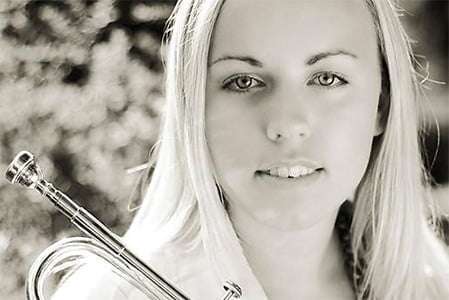 tenThing’s leader Tine Thing Helseth related how her female brass ensemble came about – in 2007 – as a bit of fun. The players (not exclusively the line-up here) decided that string or woodwind ensembles shouldn’t have all the fun, and now come-together four times a year, most often with works arranged by guitarist Jarle Storløkken who, Helseth says, seems able to arrange anything for four trumpets, one horn, four trombones and one tuba.

Storløkken’s transcriptions are certainly virtuosic and exciting, with Helseth’s intrepid group wandering around an empty stage (save for tuba-player Karin Nordli) in interleaving patterns, including some impressive kneeling (and standing again) whilst playing, especially in Grieg’s Trolltog, first to stage left, then straight ahead, then stage right, and which gave the impression that the dwarves were passing by and disappearing into the distance – and the selection from Bizet’s Carmen, where pairs (and occasionally trios) of instruments would come to the fore and recede. Very entertaining.

There was meat in the concert, too. Following Grieg, the stage was reset with ten music-stands in a semi-circle for the BBC commission, Diana Burrell’s Blaze. She has long loved the sound of brass instruments and entitled her piece to encompass the volume the ten instruments could make, each having a spot in the limelight. Opening with a Tippettesque slow grandeur but gnarlyness, Blaze sticks to a steady moderate tempo, with excursions, before unison chords to end.

The stands and music stayed for Storløkken’s arrangement of Kurt Weill’s Die Dreigroschenmusik (The Threepenny Opera), the brass ensemble a perfect vehicle for Weill’s most insidious melodies. I’m still amazed at how the trumpet can seemingly sound like a banjo for certain staccato chords, let alone the sinuous saxophone of Weill’s original, with again numerous opportunities for each instrument to shine. Back to an empty stage for Latin dances from both sides of the Atlantic: a tango from Piazzolla (Oblivion) and a six-minute romp through Carmen, after which an encore took us to North America for Copland’s ‘Hoe-Down’ from Rodeo, with a touch of Emerson, Lake and Palmer. It’s been a long while for such a feature of brass-only music at the Proms, and very welcome it was too.