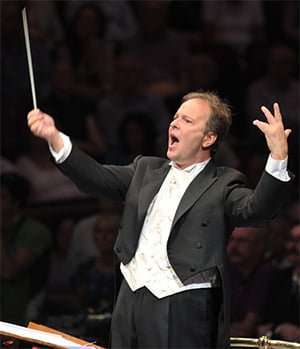 Behold the Proms! This bumper part-oceanic package launched (imagine a bottle of champers hitting a ship’s stern) the 2013 Season, opening with the eager anticipation to hear something new. Julian Anderson’s Harmony (2013) gave us six minutes of eternity courtesy of a text by the 19th-century writer Richard Jefferies. It opens with the most fragile of sounds, then comes a distant call from the past frozen musically in the present tense, a Stravinskian skill (clarinet quips further adding this composer’s presence), the BBC Symphony Chorus (only) lamenting “I could not enter time…”, the music shadow-dancing to pizzicatos and voluble in its emotions. Harmony, which fades to nothingness and stops, made a compelling if disorienting entrée.

Sakari Oramo’s first concert as Chief Conductor of the BBC Symphony Orchestra (good to know that he opts for antiphonal violins) was an euphonious mix of water-imagery and devilry, the latter supplied by Satan-associated Paganini’s capricious theme, originally for violin, and here spawning two piano-and-orchestra pieces. Beforehand Oramo saluted Benjamin Britten in his centenary year with an evocative and rousing outing for the ‘Four Sea Interludes’ that bookmark his first opera, Peter Grimes, a reading of quality; imaginative on the conductor’s part – especially the sombre and grey ‘Dawn’ and the broad-tempo, emotionally-burdened ‘Moonlight’ – and responsively played. 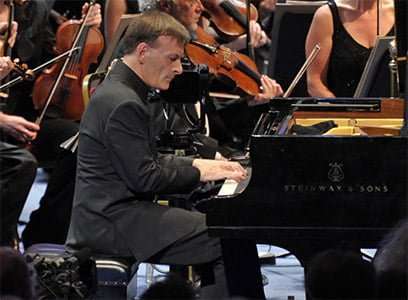 Rachmaninov’s Rhapsody needs no introduction, an ingenious set of variations, deft, colourful and richly articulated. Stephen Hough is a master of the solo part and engaged it with intelligence and enjoyment, and also brought the old-world charm and flexibility that make his appearances so distinctive; the famous Variation XVIII was dreamily romantic, captivatingly gentle, its eventual soaring integrated to the whole. Oramo and the BBCSO gave detailed and cooperative support, and this thoughtful account opened up the potential of the music rather than running with its virtuosity. Hough’s built-in encore was the Lutosławski (another centenarian), an early work from 1941 for two pianos that he and fellow-composer Panufnik played in occupied Poland; only in 1978 did Lutosławski make this arrangement. Crunchier in its Paganini commentaries than the Rachmaninov, this short (seven-minute) divertissement is somewhat quixotic, even irreverent – folksy, spiky and jazzy – Hough delighted to have it under his fingers, one sensed, with conductor and orchestra alive to its brilliance and peculiarities.

“Behold the sea… !”. American Walt Whitman’s panoramic words and Englishman Ralph Vaughan Williams’s awe-inspiring setting of them make for an Atlantic crossover of artistic honour. What a marvellous choice A Sea Symphony (completed in 1909 after much labour and tinkering) was for this First Night of the Proms; something grand and choral and also playing fair to Oramo’s keen interest in British music. The performance was thunderous and epic from the off, the Finn sympathetic to shanties, hymnals, expressive searching, and to riding ‘The Waves’. If the Youth Choir (hundreds-strong!) and Symphony Chorus, for all the impressive wall of sound, were sometimes too dominant of the orchestra, this was a stirring and moving account, full of pride. What Oramo’s navigation suggested in the first movement was Vaughan Williams’s debt to Elgar, and then almost a fond farewell to him as he moves into more of his own style in the slow movement, ‘On the Beach at Night Alone’, and even more so in the agile, gusty and foamy scherzo, its trio one of the most majestic of tunes; Oramo found this movement’s undercurrents and its joys, the choirs disciplined and sparkling.

The finest music comes in the expansive and extended finale (‘The Explorers’), fully half-an-hour. This solemn and visionary music found Oramo fully inside its sensitive core, letting it breathe, and the sections involving a semi-chorus were quite magically secluded. Sally Matthews and Roderick Williams made rapt unisons, unbelievably tender. Throughout, not least in the second movement, Williams was a mellifluous and unforced presence, diction superb; and if Matthews couldn’t match such vocal clarity she was no less affecting, particularly in the national-flags unfurling during the first movement. But it’s the large-scale conclusion that makes this Symphony, and this performance, special, Oramo indulging it to just the right degree of pathos. The folk-tune episode anticipates a bright future, but Vaughan Williams (choosing from Whitman’s collection, Leaves of Grass, to plot his grand design) finally takes us to the edge of the world, to another ‘unknown region’, the work ending on highs, lows and silences, just like Richard Strauss’s Also sprach Zarathustra (1896). For 70 minutes, Sakari Oramo and the BBC Symphony Orchestra suggested great things ahead as they started their shared voyage.