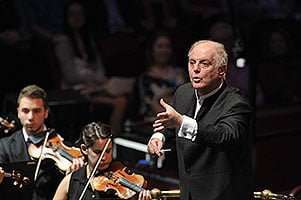 Daniel Barenboim’s West-Eastern Divan Orchestra was significantly larger for this second concert in their Beethoven symphony cycle (six double basses for No.4, eight for the ‘Eroica’), flagging up their romantic scale. There’s been a bit of a set-to on the Classical Source Comments facility about exposition repeats – that is the lack of them – and they weren’t observed in this concert either. For what it’s worth, the repeat would have made better sense in No.4, once past the rather over-indulged Adagio introduction, and would have seriously undone the propulsive vigour that singled out this particular performance of the ‘Eroica’.

Barenboim’s way with No.4’s introduction was, to be sure, extraordinarily tense, a sort of suspended musical chaos (with some uncertain ensemble) tiptoeing round the imminent release of a monstrous energy – except that No. 4’s main Allegro isn’t monstrous; it’s very jolly, and it went with the vivace rip that Beethoven designated. Perhaps Barenboim was tempted by the Royal Albert Hall’s wide-open spaces to show off the WEDO’s extremes of dynamics – the thrill of a good orchestra playing really softly never disappoints – and sustaining power. Otherwise, No. 4 was bristling with high spirits, the separation of the double-bass section from the rest of the strings visually and aurally enhancing the layered clarity of the sound. Sometimes a bit more brightness wouldn’t have gone amiss, but the depth and polish of the strings and their edgy, anticipatory precision were world-class. A card-carrying, old-school romantic, Barenboim drew out a finely spun transparency in the slow movement, and the eloquent clarinet and flute solos bore witness to the superlative refinement of the woodwind throughout the concert. In general, this performance honoured No.4’s expressive range, good humour and astonishing prodigality of material. 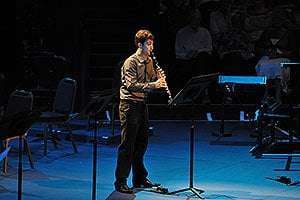 After the length and complexity of the Pierre Boulez work (Dérive 2) in the first of the WEDO’s Proms, Dialogue de l’ombre double (Dialogue of the double shadow) was comparatively plain-sailing, and flattered the sheer originality of the Beethoven. The piece was inspired by silhouettes of a man and woman projected onto a screen, translated into music by Boulez as a discourse between a live solo clarinet and a pre-recorded clarinet double. You got the point quickly enough, but this song-without-words exploration easily sustained its mesmerising poetry throughout its 20 minutes, and the IRCAM-engineered taped sound passing round the hall gave it an eerie majesty. The live clarinettist, Jussef Eisa, was heroically virtuosic and focussed, making complete sense of the music’s shape and logic. The piece may have been written in the early 1980s, but it had the flavour of a 1960s’ psychedelic happening. 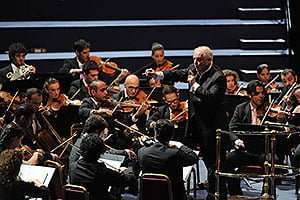 The performance of the ‘Eroica’ had a spellbinding freshness and grandeur, and was full of the most satisfying detail – just the rhythm-bending sforzandos in the first movement going off like controlled detonations were evidence enough of the level to which the players were inside the music, as was Barenboim’s tactful corrective to the horn’s ‘false entry’ at the reprise, a beautifully handled moment. He tightened the screw in the ‘Funeral March’ fugue to an exceptional degree and, again, there was a very special discretion and warmth in the delivery of the longed-for appoggiatura in the revisited second subject. Beethoven playing at this level of energy and responsiveness completely justifies all nine being performed by one orchestra and one conductor for the first time at the Proms in seventy years. I was sometimes put off by the extravagant largesse of Barenboim’s conducting style, but the results of the rapport between him and WEDO are there for all to hear.