“Cult London band Public Service Broadcasting marks the 50th anniversary of the first manned Moon landing with a brand-new orchestral arrangement of its 2015 studio album The Race for Space. The group is joined by The Multi-Story Orchestra.” [BBC Proms website] 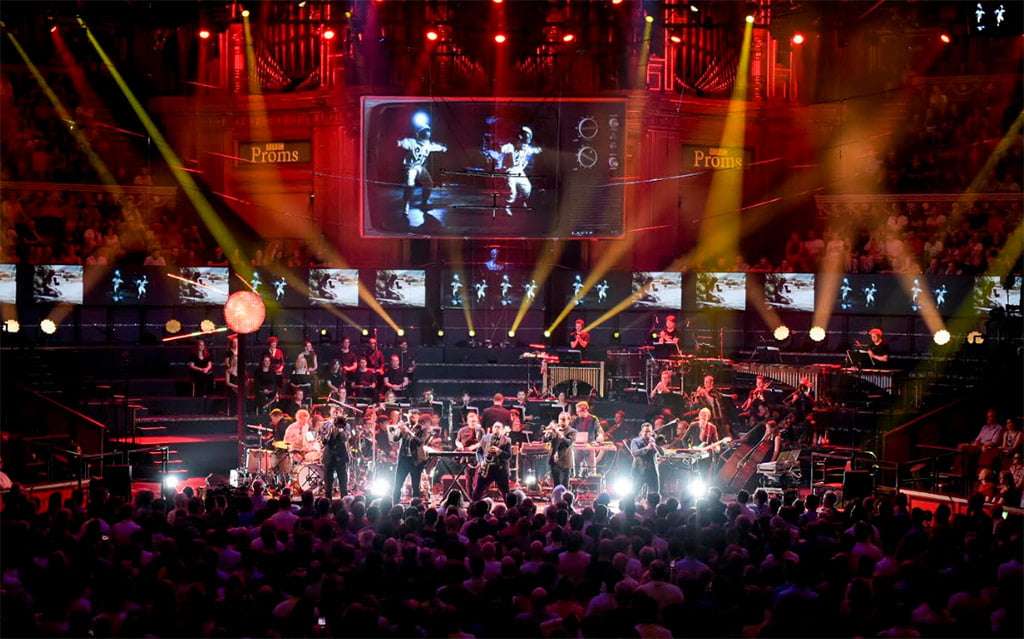 Despite the heat, which may have put off passing audiences at the earlier Prom (No.9), this year’s first Late Night was rammed. I may have been one of the laggards in only recently falling for the charms of Public Service Broadcasting’s intriguing The Race for Space released in 2015, but it was a shoe-in for the celebrations of the first Moon Landing in 1969. And it proved an energising experience in its live expanded form: band-member J. F. Abraham’s orchestrations for The Multi-Story Orchestra filling the Royal Albert Hall with a succession of ear-caressing chords and cadences, adding an introduction and coda to the album, as well as interpolating an extra track, Korolev (Sputnik’s single B-side, about Russian rocket engineer, Sergei Korolev), between Go! and the final track Tomorrow.

It’s an unusual conceit: a potted history of the space race, utilising archive audio footage – and here video footage, broadcast as if in an old-style television, with dials on the right-hand side – from Sputnik (a flashing full-size replica was raised above the orchestra in the titular third piece, and flashed with LED patterns, before subsiding towards the end), via Gagarin and Valentina, celebrating the first man and first woman in space respectively. It’s a fifteen-year trawl, back and forth, through Russian and American space effort, enveloped in atmospheric soundscapes, which include the original four-piece band set-up and a five-piece brass section – saxophone, two trumpets, two trombones – that occasionally swaggered onto the forestage or behind the orchestra. 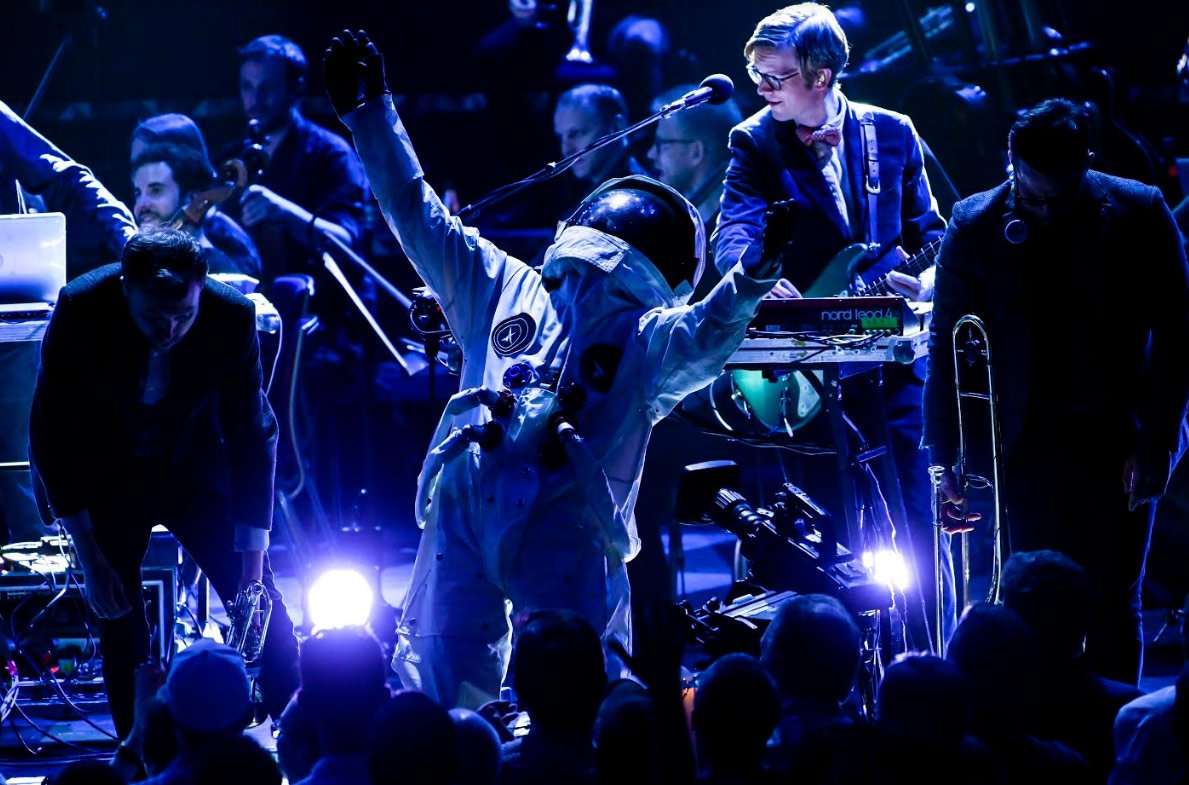 Over and above both the charm of the project and the immediately involving (if not overly complex) music were the production values, even if at times (particularly in The Other Side – following Apollo 8’s first manned orbit, building the tension as the craft ‘disappears’ on the far side of the Moon, with NASA uneasily waiting for re-contact) the music threatened to drown out the sampled audio. London Contemporary Voices, miked at the back of the orchestra, offered a modern Holstian gloss of wordless chorus, particularly in the new introduction and coda movements, while the band and the brass quintet contributed suitable propulsion for the whole project to escape Earth’s orbit.

There was levity – when frontman J. Willgoose belatedly introduced the performers he not only forgot himself but also Abraham – and poignancy, in the dedication of Go! (celebrating the technical achievement of the Apollo 11 Landing) to Christopher Kraft, a major force in establishing NASA’s Mission Control who died on Monday. Willgoose also paid well-received homage to the other Public Service Broadcaster without whom the evening would not be possible: the BBC.

By turns contemplative – with the RAH’s mushrooms and packed audience flickering as via a celestial glitterball – and exhilarating, The Race for Space played out seamlessly with Christopher Stark forming a rock-steady musical centre.

I still cavil at the dumbing-down of the printed programme (single A3 sheet folded thrice into A5) which finds no room to list the individual performers (surely Proms excellence should run all the way through the presentation) but, in general, this first Late Night was Out of this World and laid down a high benchmark for those to come. It was filmed for broadcast on BBC4 on July 26.