“Woodstock, the Apollo 11 mission to the Moon, the ongoing Vietnam War, The Beatles’ final album (Abbey Road) – 1969 was a pivotal year. This Prom explores the film and popular music of 1969 to revive the soundtrack of a special summer. The BBC Concert Orchestra under Stephen Bell presents a typically wide-angled view, taking in music inspired by the era-defining Woodstock festival, excerpts from the films Battle of Britain, The Italian Job, Butch Cassidy and the Sundance Kid and Midnight Cowboy, and ‘Here Comes the Sun’ from The Beatles’ final album Abbey Road. As the USA’s victory in the space race inspired new music to match the emerging digital era, the Moog synthesizer broke into the mainstream with the album Switched-on Bach. A concert evoking the end of the Swinging Sixties, with a cross-generational appeal that offers both a sunburst of nostalgia and iconic revivals.” [BBC Proms website] 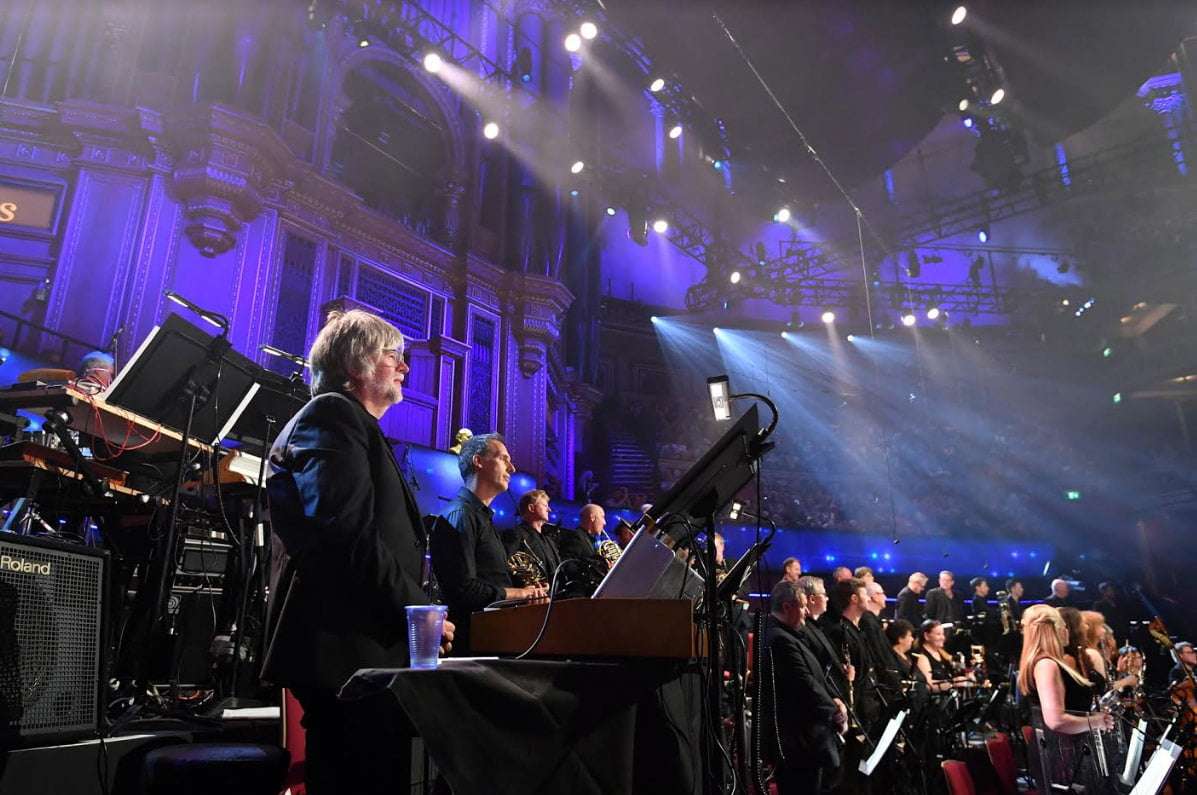 People wore flowers in their hair and there were Paisley shirts and loon pants in the auditorium but more people wore twenty-first-century sportswear and trainers. This Prom was 1969 – the Sound of a Summer: Woodstock, Apollo 11 Landing on the Moon, Vietnam War protests, the Beatles’ final album and counter-cultural activity generally.

We didn’t all sing with one voice in 1969. The Beatles and Aretha Franklin may have been at their peak but Lulu won the 1969 Eurovision Song Contest. Midnight Cowboy won the Oscar for Best Film, and Easy Rider the Grand Prize at Cannes, but Carry On Camping was Britain’s biggest box-office success that year. Neil Armstrong stood on the Moon; however the launch of the Ford Capri was mightily important for a lot of people. It was a diverse and contradictory year that was only partially reflected in this Prom.

The evening started with Joni Mitchell’s Woodstock. Mitchell was famously not there and watched it on television from a hotel room in New York City. Nevertheless, her song captures the yearning for peace in a country ensnared in the Vietnam War, and Vanessa Haynes, accompanying herself at the piano, caught its counter-cultural spirit in gospel-tinged vocals.

The BBC Concert Orchestra and Stephen Bell followed with William Walton’s Battle of Britain music, arranged by Colin Matthews. Most of Walton’s music was axed from the film by the producers and replaced by a score from Ron Goodwin. The brass, generally in good form, flew rather too close to the sun at times. 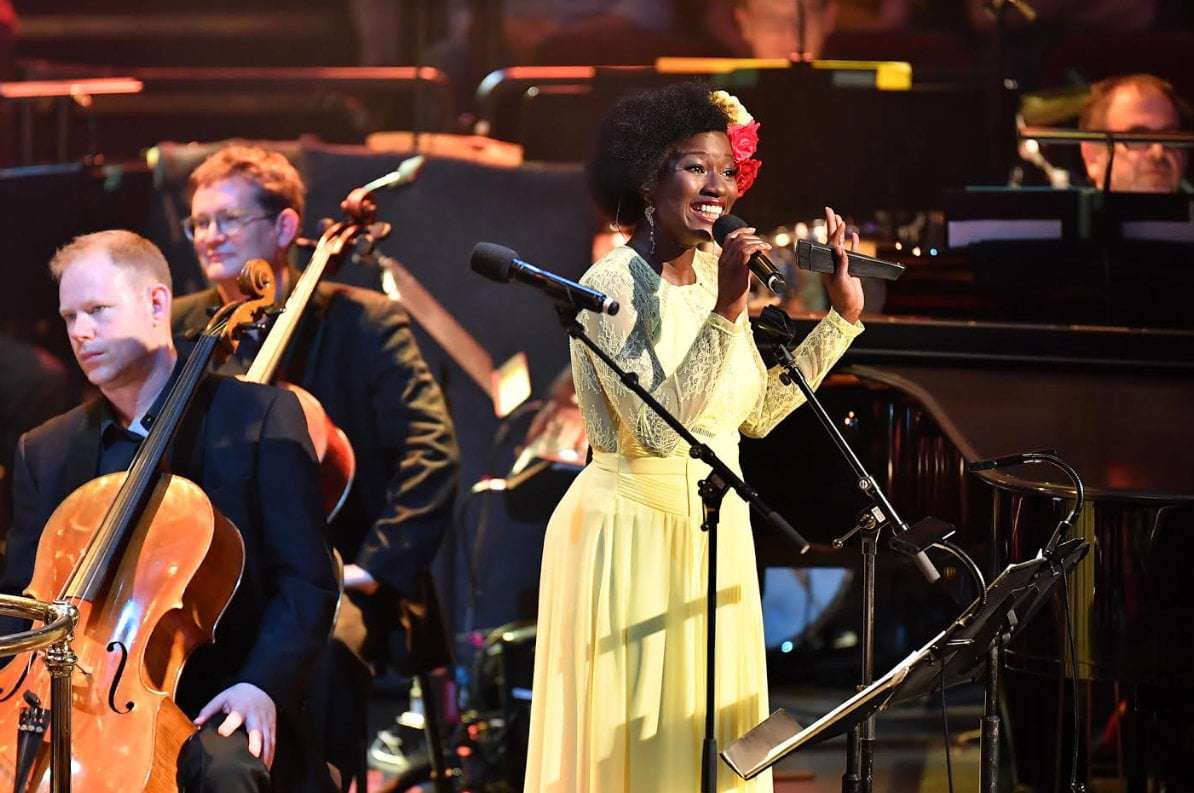 Haynes and co-vocalist Tony Momrelle were real assets, often able to give familiar songs new life. Haynes gave Burt Bacharach’s Oscar-winning Raindrops Keep Fallin’ on My Head (Butch Cassidy and the Sundance Kid) more lift than it frequently receives. She made What Are You Doing the Rest of Your Life (by Michel Legrand) touching with her distinct and elastic phrasing. Momrelle has a fine voice that can be both sinewy and buttery and brought vigour to Everybody’s Talkin’ (sung in Midnight Cowboy by Harry Nilsson). The harmonica theme by John Barry, played in the film by Toots Thielemans, was beautifully delivered by Phillip Achille. Monrelle also made something out of the rather forgettable On Days Like These by Don Black and Quincy Jones from The Italian Job. Barry’s Ski Chase from On Her Majesty’s Secret Service (George Lazenby as Bond), with its typically bravura brass, was splendidly delivered, with glowing trombones, although the guitar was over-amplified.

Three Beatles numbers from Let It Be closed the first half. Momrelle gave a peppy reading of Get Back and, after a rather too emphatic orchestral account of Something, joined Haynes in a powerfully shimmering version of Here Comes the Sun.

Undoubtedly the biggest classical hit of 1969 was Switched-On Bach by Walter Carlos. It was top of the charts that year and reached No.10 in the Billboard charts where it stayed for fifty-nine weeks. Carlos developed the synthesizer (“the Steinway of the future”) created by Robert Moog. Will Gregory of Goldfrapp is a Moog enthusiast and brought his five-piece Ensemble to perform the first movement of Brandenburg Concerto No.3. Bach on synthesizers is a taste I’ve yet to acquire and the Moog’s buzzy retro-futuristic sonorities created an uneasy blend with the orchestra.

Gregory’s own Journeys into the Sky from his opera Piccard in Space was a happier choice. Based on the flight into the stratosphere in 1931 by the Swiss physicist Auguste Piccard it provided a tenuous link to the theme of space-travel in 1969. The evening ended with two classics. Momrelle sang I Heard It Through the Grapevine which became Motown’s biggest hit with Marvin Gaye. Haynes sang Bacharach’s I Say a Little Prayer, originally sung by Dionne Warwick but re-recorded by Aretha Franklin. The full-house audience went into virtual orbit with an encore, David Bowie’s Space Oddity, the singers backed by a pulsating BBCCO and an unearthly-sounding Moog.

It was an evening of nostalgia rather than re-evaluation. Some of the darker aspects of 1969 weren’t mentioned such as the Manson Family or the beginning of the Troubles in Northern Ireland although Lemn Sissay referred to the Civil Rights Movement and Stonewall.