A tabloid might run the headline: “Interval Chaos at BBC Proms”. Of course, Classical Source is above such tittle-tattle, but more anon on this. Your correspondent only just made this concert: train cancelled with the following one then ensnared into a points problem, and then further problems getting to the tube (London Bridge) and once aboard. 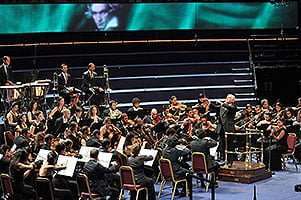 So, the ‘Pastoral’ Symphony should have been balm to the ear and the soul. Strangely, it wasn’t; even odder when No.6 is a glorious highlight in Daniel Barenboim’s recent Divan recording as part of their complete Beethoven symphony set on Decca. In essence, and not surprisingly, it was a performance cut from similar cloth, yet the first movement seemed lethargic despite the unforced joy of the music-making at a tempo no faster than it needs to be (had Barenboim taken the repeat it might have seemed indulgent). Then the ‘Scene by the Brook’ had rather too brisk a current, the birdsong rather brusquely tweeted. Indeed, only the ‘Thanksgiving’ finale carried any engaging intensity, coming after a Peasants’ scherzo that needed letting off the leash and a ‘Storm’ that was too carefully plotted.

The Fifth Symphony (like the ‘Pastoral’ sporting eight double basses for all-important weight) was a similar story: the best was kept to last, for following a sluggish, lacking-danger opening movement (very expressive oboe soliloquy though), then an at-times dainty Andante con moto and an underplayed scherzo, came a momentous last movement (albeit without the vital exposition repeat) that was properly triumphant, with a final chord as emphatic and as vindicating as possible. Trombones added majesty and the contrabassoon bit through, but the piccolo-player was asked to stand – oh dear! – for what was a twee contribution. As the symphonies are not being played chronologically, the piccolo and trombones (first time in a symphony, plus the contra) had had their thunder stolen earlier. 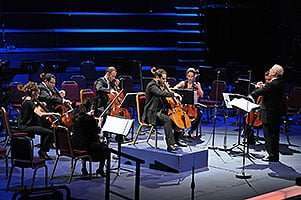 Two of Pierre Boulez’s exquisite, fastidiously crafted miniatures formed the centrepiece of the concert. (Boulez recorded a fascinating Beethoven 5 many years ago – in London with the New Philharmonia Orchestra; long overdue an international release, it was issued on CD in Japan quite a few years ago.) Mémoriale (1985) has something of a complex history; suffice to say that this stand-alone, without electronics version was stimulated by the early death of flautist Lawrence Beauregard (1956-85). It’s the flute that takes centre-stage, with three violins, two violas, a cello and two horns. This is music that is sensual and agitated, with much flutter-tonguing from the soloist – Guy Eshed was very meaningful with the ensemble subtly iridescent in its shadow play.

And so to the interval. But no. Some in the audience knew what most did not: that the break would now follow Messagesquisse. Chaos reigned. Your correspondent was but seconds away from a cup of coffee but caught the announcement that this was not the interval. I returned; quite a few did not, mostly because they didn’t know. So Messagesquisse (1977) “for solo cello and six accompanying cellos” was played to a now rather smaller audience, music written for Rostropovich that ranges from lyrically intense to scintillating, always exploring, and found in Hassan Moataz El Molla a dedicated soloist. The interval should have been left where Guide and Programme said it would be, for these Boulez pieces need their own space rather than being juxtaposed without ceremony. The cello creation would have been particularly interesting just before Beethoven’s Fifth.