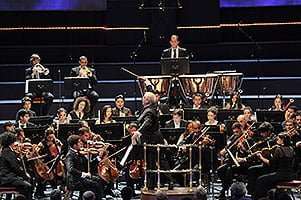 With the Olympics nearly upon us and Universal’s marketing campaign for “Beethoven For All” reaching the parts that classical PR rarely touches (Sky News for example), the West-Eastern Divan Orchestra arrived at the penultimate leg of its much-trumpeted Beethoven cycle on the hottest night of the year. But then coming (reportedly) from Israel, Palestine, Syria, Jordan, Egypt, Lebanon, Algeria, Tunisia, Iran, Turkey and Spain, these players will have been used to the heat – as well as to Daniel Barenboim’s way with this composer. Their tour schedule has already embraced concerts in Munich, Versailles, Geneva and Seville plus a private event for Pope Benedict XVI and there are dates to follow in Berlin and Salzburg. That said, only London is getting all nine symphonies. As with Gustavo Dudamel’s Simón Bolívar Symphony Orchestra, a star-studded audience and a warm reception is assured before a note is heard. Difficult, though, to be wholly cynical when so much of what Barenboim says strikes sparks: “I maintain music is not here to make us forget about life. It’s also here to teach us about life: the fact that everything starts and ends, the fact that every sound is in danger of disappearing, the fact that everything is connected – the fact that we live and we die.” 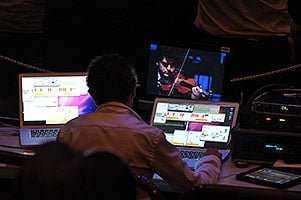 The problem being that, as Andrew Porter once said of Leonard Bernstein, the performances mimed (here with much ostentatious brow mopping) can be more compelling than what reaches our ears. It’s a real paradox. While Barenboim has struggled manfully to counter traditional antipathies organisationally, there is nothing radical, or even especially interesting, about much of his music-making. Even the inclusion of some of Pierre Boulez’s more attenuated scores in the Proms series feels like the last gasp of a certain kind of modernist thinking. Taken on the level of a Sixties happening, the BBC lighting team having suffused the stage with blues and greens, the electro-acoustic sounds of Anthèmes 2 proved seductive if over-extended. The solo violin of the earlier Anthèmes is ingeniously processed and projected spatially in a realisation presumably conceived to be digested more intellectually in a more neutral acoustic. There were plans to perform it at an early-evening Boulez event at the Royal College of Music during the 2009 season but it made an undoubted impact in the bigger hall where the capacity crowd was spellbound or at least well-behaved. Younger children and confirmed sceptics had already made for the bar. 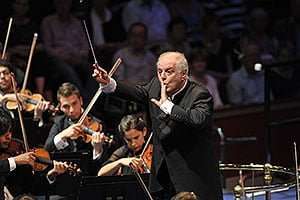 Beethoven’s Eighth, placed first, was more problematic. Barenboim seats his violins antiphonally, taking his cue from the great pre-War conductors rather than from any authenticist impulse. The eight double basses were deployed hard left with timpani prominently placed rear-centre, underpinning a sort of mellow, old world thunderousness. Alas it was difficult to find any special clarity or drive in a reading that would have been considered central but dull in the 1960s. What was lacking here was not so much velocity as a sense of fun, some sterling work from the excellent woodwind section notwithstanding. The muscular outer movements risked seeming brusque when not muddled by big-barn resonance.

After the interval a repeat-shy Seventh brought the more polished display although it too will not have been to all tastes. The first three movements proceeded without a break in a single arch: whether this was an artistic decision or one intended to forestall applause I cannot say. There were plentiful old-world touches, the opening introduction predictably broad, the slow movement most eloquently phrased with grace-notes given plenty of space, the third movement Klemperer-like (the bars linking the trio back to the scherzo impossibly laboured), with rhetorical points occasionally made heavily but usually incorporated into the oddly bland middle-European tonal universe that Barenboim prizes.

Did it add up to a great performance? One doesn’t necessarily want a Carlos Kleiber-like pizzicato to close down the Allegretto but without his rhythmic lift the work as a whole, and especially the finale, can seem marmoreal, unrelenting rather than truly involving. Barenboim was a superb pianist and can be a superb conductor (Wagner) but we have grown used to a more brilliant (superficial?) kind of Beethovenian music-making in which, this conductor might argue, the importance of harmony as the determining factor in the pacing and phrasing has been rather lost. Had it been 20 degrees cooler in the hall one might have agreed with him.