“Marking 50 years since the death of Malcolm Sargent, Sir Andrew Davis and the BBC SO recreate Sargent’s 500th Prom. With music by Elgar, Holst, Walton and Berlioz, as well as Schumann’s mercurial Piano Concerto, with Beatrice Rana as soloist.” [BBC Proms website] 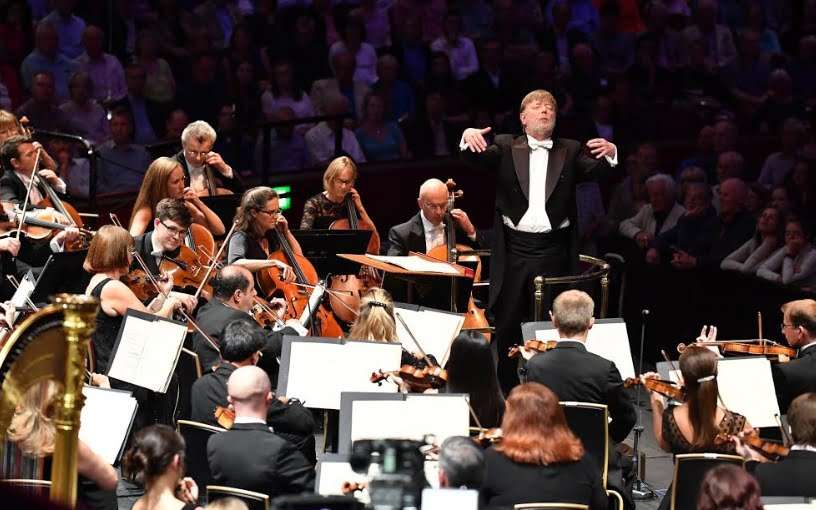 “Just look at all those white-haired balding Prommers, Bob – thirty or forty years ago, their hair was so much darker – in thirty years’ time, there won’t be any of them left, or those that are won’t be able to stand.” Such a comment, which a friend made recently, was recalled when, on collecting my ticket, I overheard a conversation between two younger concert-goers querying who Sir Malcolm Sargent was – and why was there a Prom named after him.

Although very ill, he died rather suddenly, fifty years ago, so for any Prommer under the age of sixty-five, Sargent would barely be a distant memory, but for those who – like me – attended their first Prom in 1951, the year of the Festival of Britain (it was Constant Lambert’s last appearance – he died a week later), Sargent was the personification of the Proms. But because in those days he and the BBC Symphony (of which he was Chief Conductor) carried by far the lion’s share of concerts (no foreign orchestras in those days!) he was called upon to conduct a far greater range of music than ought to be asked of most musicians, with the result that not every Sargent performance was as good as the best of them. 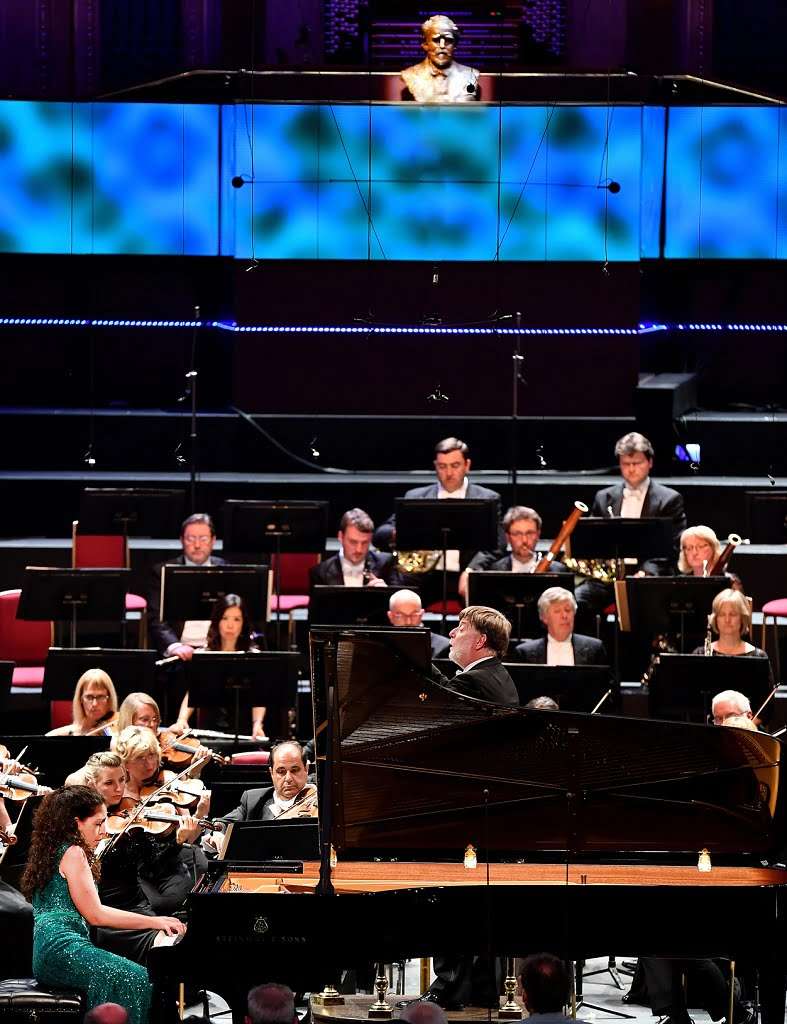 His reputation suffered occasionally as a consequence, and whilst it is true he could sometimes direct what one might call thoughtless performances, at his best (which he achieved more often than not) he could be a magnificent and indeed inspiring conductor – especially in British, Scandinavian and Russian music (a particularly superb Shostakovich interpreter), as well as in his ‘trademark’ works: choral music (the greatest such conductor of that repertoire) and as an accompanist (Sargent was a superb pianist – having played Concertos by Rachmaninov and Beethoven in his youth). He was also a composer and an admired orchestrator of other composers’ works (Brahms and Rachmaninov especially).

So, marking the half-century since Sargent’s death with a repeat of the five-hundredth Prom that he conducted, on 23 July 1966 (that season’s first night), it was entirely suitable that Sir Andrew Davis led the self-same wide-ranging programme. This was a reminder of how much longer concerts were fifty years and more ago, but a programme which it appeared today’s BBCSO enjoyed getting its artistic teeth into. Certainly, Berlioz’s Roman Carnival got the evening off to an excellent start; lively, strong and eminently refined where necessary as well as being consistently unexaggerated yet needle-sharp throughout. 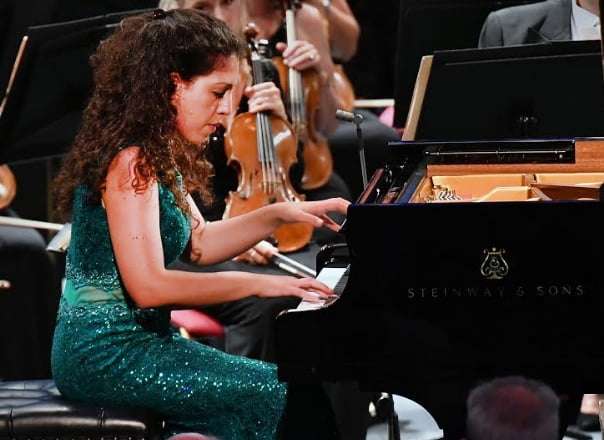 Fifty years ago, Sargent’s soloist in Schumann’s Piano Concerto was Moura Lympany, but no British pianist of any gender was on hand for this concert – so the soloist was the twenty-four-year-old Italian Beatrice Rana, who delivered an account marked by a fluency and competence as one might reasonably expect from a silver prize-winner in the Van Cliburn Competition, if lacking the last degree of brilliance and insightful finesse one would equally reasonably expect from a more experienced performer. Nonetheless, the youthful spirits, in which this masterwork abounds, were more than effectively conveyed, even if there was a tendency for the underlying cohesion – especially in the first movement, with its pre-echoes of Brahms – to be lost sight of in the juxtaposition of power and subtlety.

Rana then offered Liszt’s transcription of Schumann’s ‘Widmung’ (from his song-cycle Myrthen, Opus 25), not fully enjoyed by all, owing to a member of the audience being taken ill and having to be carried from her seat by the medical staff. One looks forward to hearing Rana again, perhaps in a Concerto by Saint-Saëns. 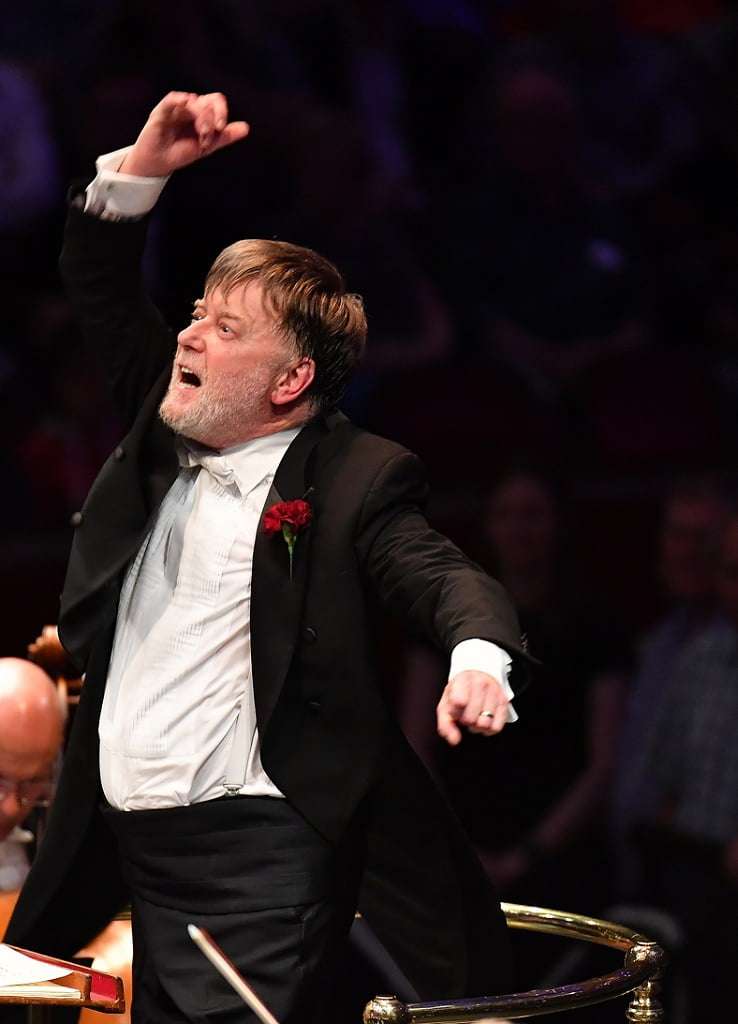 The second half was all-British, finding the BBC Symphony Orchestra at the top of its form and fully honouring Sargent’s memory under an inspirational Andrew Davis. Beginning with Elgar’s Cockaigne, this was no run-of-the-mill account, but a compelling recreation of a truly immortal score – vivid and sensitive playing throughout, displaying the music in all its originality, underlined in the closing pages by the magnificent Royal Albert Hall organ played by Stephen Disley.

Suite No.1 from William Walton’s Façade, with the ‘Popular Song’ from Suite 2 placed penultimately within it, was quite superbly tongue-in-cheek, the soon-to-be “bright young things” of the early 1920s brilliantly recalled. On this showing, Davis was Constant Lambert personified, and in Holst’s magnificent Perfect Fool ballet music (which opens the opera) Davis brought his usual authority to bear on music which ought to be far better-known than it is, so brilliantly orchestrated and full of original and intriguing music. It would be difficult to imagine a finer or more convincing account.

In great contrast, Delius’s On Hearing the First Cuckoo in Spring showed conductor and orchestra equally the masters of very different art, a suitably luscious soundworld for Delius’s warm, leisurely and ineffably affecting musical-picture so rich in half-tones and individual colouration. Before the final item, Davis gave a little speech, before turning for Britten’s Young Person’s Guide – a work Sargent premiered on film, in concert and on disc. The excellent articulation, internal balance, and clarity of individual players throughout the performance of this masterpiece proved a perfect ending to a splendid programme – as persuasive today as it must have been in the year of Frank Sinatra’s ‘Strangers in the Night’ and The Beatles’ ‘Eleanor Rigby’.