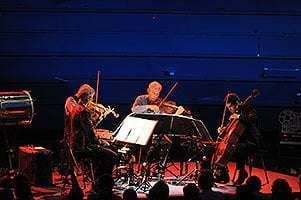 As Andrew McGregor mentioned in his brief spoken introduction, the wonder is that this was the Kronos Quartet’s debut at the Proms – 40 years old next year (with a recently new cellist). It was a very welcome debut, although I have doubts about the presentation and some of the music played. McGregor mentioned we would start and end in modern war zones: Syria and Balkans; he also said that David Harrington would introduce the programme, although – as it turned out – it was simple name-checking the works and composers, with no ancillary information. Listeners to BBC Radio 3 fared better with McGregor’s commentary.

On this evidence the quartet’s style falls into two categories: the ‘pop music’ transcriptions and more ‘serious’ fare. Omar Souleyman’s opener, and the Swedish song, ‘Tusen tankar’, fell into the former category – the first notable for ditching the viola (Hank Dutt content playing the drum); the second including the two Fourth String Quartets, the new commission and the published concert closer. There was an encore, falling well and truly into the first category – Clint Mansell’s Death is the Road to Awe from his film score to The Fountain (2002), building to a massive, backing-track-supported climax, as souped-up as could be… 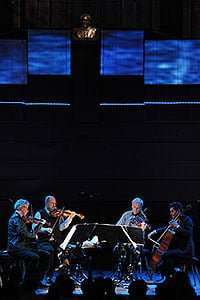 Much more interesting were the other works, although the very questionable amplification did dull some of their impact. Only Ben Johnston didn’t use some form of electronic addition, but you could argue, amplified or not, that Gubaidulina’s Fourth String Quartet is too intimate for a venue the size of the Royal Albert Hall, but it weaves its magic spell, complete with two recorded quartets and the requirement of small rubber balls bounced and brushed on the strings. Johnston’s Fourth Quartet – based on Amazing Grace – also bears repeated hearing; the variants of the tune elaborated through delicate string filigree and eerie harmonics.

The other two composers were in the Hall. Both Nicole Lizée and Aleksandra Vrebalov use recorded media; in the intriguingly titled Fibre-Optic Flowers – a quotation from Delia Derbyshire, one of the mainstays of the BBC Radiophonic Workshop – our four players were not only in charge of their instruments, but also a reel-to-reel tape recorder, a turntable, an arcade game; Lizée uses all of these imaginatively during an involving ten-minute work that ends with a crackly spoken phrase on a loop. 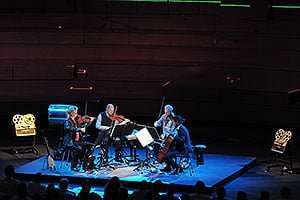 The Vrebalov requires Harrington to play a Serbian gusla (a one-horse-hair-stringed instrument), giving a harsher rasp than his violin, and John Sherba a Balkan drum to open with, before melding recordings of street chatter, sonorous bells and indigenous songs (including one sung by Vrebalov’s maternal grandmother) into the mix. It’s an atmospheric work and conjures up the complexity of that once war-torn land, with its religious and ethnic differences.

Mansell’s encore achieved Harrington’s stated aim or bringing something epic to the Royal Albert Hall. It has limited charm and betrays its film-music genesis with a simple harmonic range and repeated phrases. I guess this is the one piece that couldn’t work without the string instruments being amplified, to get the biggest climax, but I’d far rather have acoustic intimacy, even in a large space.