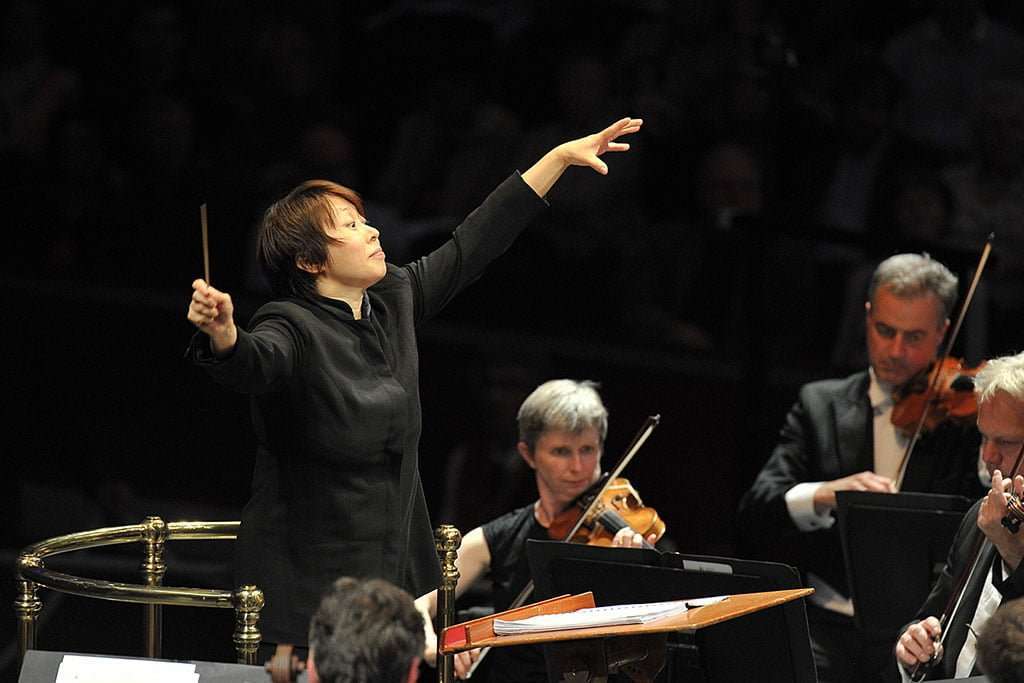 Two years ago, when Xian Zhang made her Proms debut with Orchestra Sinfonica di Milano Giuseppe Verdi, she paired that composer with Tchaikovsky’s Manfred Symphony. This time – her first return visit to the BBCNOW after her debut with it in May – she brought two Russian Symphonies, albeit a chalk-and-cheese pairing: Prokofiev’s impish look-back, the ‘Classical’, and another (like Manfred) once heavily-cut epic, Rachmaninov’s Second. She admitted to making a few cuts in the Finale, but was largely faithful to the sweeping grandeur of Rachmaninov’s original conception, drawing some fabulously committed playing.

That BBCNOW was on top form was evident from the pared-down forces for the Prokofiev – dragging Haydn (albeit willingly) into the 20th-century, hence its nickname. After so much Prokofiev the night before (all five Piano Concertos), would more gild the lily? Not at all: Prokofiev’s breezy invention was like a breath of fresh air, especially with well-matched wind timbres and an appropriate lightness. Even clapping between movements couldn’t dispel the infectious bonhomie.

There was also applause between the movements of the Rachmaninov; a much more weighty affair. Zhang had the measure of it, a romantic sweep starting from the opening’s growling double basses to the irrepressible high spirits of the final bars, with only an occasional longueur when transition passages in the first and third movements threatened stasis. There were exquisite solos along the way: not least Sarah-Jayne Posmoguer’s on cor anglais leading into the first movement’s Allegro – I was suddenly struck by the thought as to whether Rachmaninov might have been channelling Wagner’s mournful music that opens of the third Act of Tristan here – with Lesley Hatfield’s sinuous violin solo shortly thereafter. Then there was Robert Plane’s silky clarinet contribution at the opening of the slow movement, and many more instances. 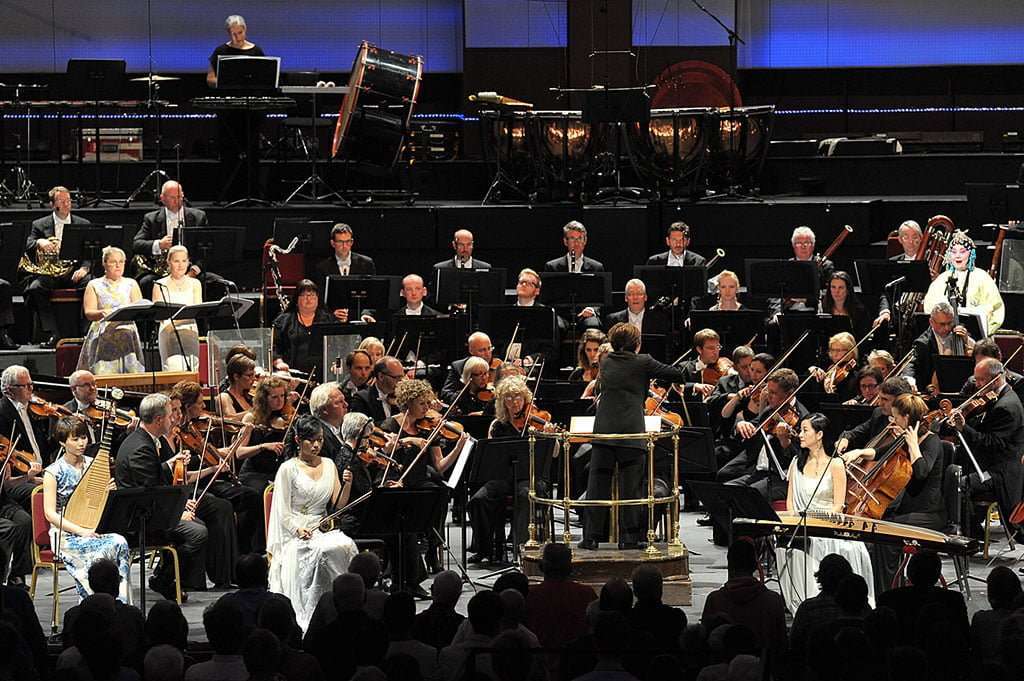 By way of contrast the centrepiece of the concert looked further east, to China, with Qigang Chen’s 45-minute Iris dévoilée (Iris Unveiled), a nine-movement portrait of womanhood in various moods (ingénue, chaste, libertine, sensitive, tender, jealous, melancholy, hysterical and voluptuous as the movement titles would have it).

With a vastly expanded orchestra, including a back row of tuned percussion, piano and harp, the piece requires six soloists – three sopranos including one from Beijing Opera tradition. Here Meng Meng, in full costume, was joined by the twin Komsi sisters, Anu and Piia, who all stood in the body of the orchestra on opposite sides of the woodwind players. On the forestage were three Chinese instrumentalists: Jia Li on the Chinese lute, the pipa, Nan Weng on the two-stringed erhu (with wooden soundboard) and banhu (with skin soundboard), and Jing Chang on the Chinese zither, the zheng. Used very economically and subtly as part of the composer’s soundscape, they added an exotic colour to the orchestration, also joined by solo violin and cello (nine facets of womanhood with nine women – conductor, six soloists with leader Hatfield and principal cellist Rebecca Gilliver). 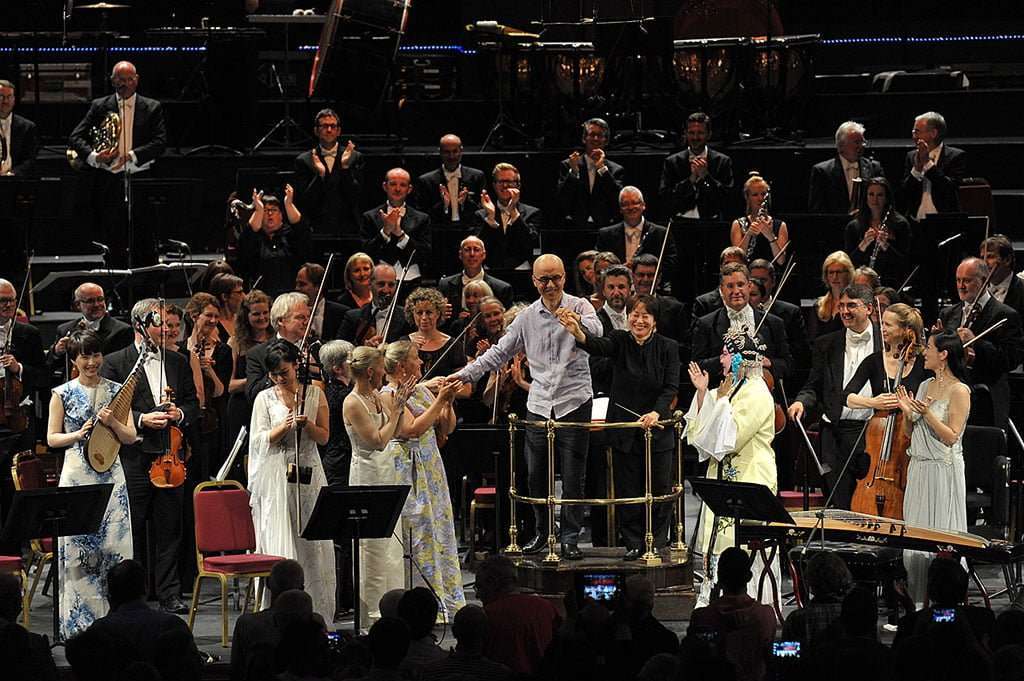 Chen – whose Proms debut was last year with a Concerto for trumpeter Alison Balsom – was taught by Messiaen, and Iris dévoilée comes tardily to London, as it has had over 100 performances since 2001. A shimmering start describes the young ingénue epitomised by stuttering pipa and wordless soprano (Anu Komsi); the ensuing glistening movement introduced Meng Meng, with distinctive high-pitched, clipped timbre as the chaste woman, matched by the erhu, tentative in love. The Libertine, displaying more open, western attitudes, involves all three sopranos and is aptly described as “whooshing”. The zheng epitomises the state of being sensible, while strings, vibraphone and harp alternate with woodwinds and Piia Komsi, in the movement marked tender, with Messiaen a clear influence.

The flip side, jealously, silences the voices but encourages the strings to chatter like true gossipmongers. Melancholy features erhu and banhu, dialoguing with Hatfield and Gilliver, while the most arresting section involves the piercing sopranos being, as the movement title suggests, hysteric. In this performance the male perspective serendipitously arrived in the final, longest movement, when principal violist Carl Hill introduced the main voluptuous theme. Chen’s subtlety in changing focus from western orchestra to Chinese solo instruments was again to the fore, ending a rather beguiling piece which in no way outstayed its welcome.

Chen’s music is at once ear-catching and rather mysterious, layers overlapping with layers, unusual timbres abutting with delicacy.