Smetana, orch. Szell
String Quartet No.1 in E minor (From My Life)
Prokofiev
Violin Concerto No.1 in D, Op.19
Dvořák
Symphony No.7 in D minor, Op.70 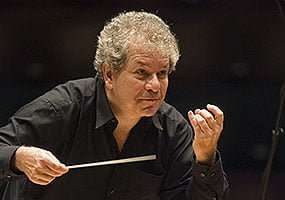 There was an elegant logic to this Czech-oriented programme including Georg Szell’s orchestration of Smetana, which the great conductor regularly used as a calling-card, probably to test the mettle of an unfamiliar orchestra – and Dvořák played the viola part in the first performance of ‘From My Life’.

Having heard as a teenager Szell’s Edinburgh Festival concerts with the Cleveland and the Concertgebouw orchestras in the early-1960s, it was clear that he was fanatical about detail and could be utterly acerbic in his criticism of any orchestra not giving of its best. One cannot imagine that he would have been impressed by the BBC Symphony Orchestra’s lacklustre playing on this occasion.

The work’s fiery opening was leisurely and lacking in intensity; it was also not, as Koussevitzky once put it, “very together”. Internal balances, at least in the first two movements, were frequently awry unduly favouring the brass. Matters improved considerably in the slow movement ushered in with a soulful cello solo from Susan Monks and there was a fine Eastern European-sounding horn solo from Nicholas Korth. All too often however one questioned whether Szell’s elaborate orchestration was misplaced and something altogether more modest would have served the music better.

By contrast Prokofiev’s First Violin Concerto gave great pleasure. It marked the welcome Proms debut of Vadim Gluzman, an excellent Russian-born violinist, now an Israeli citizen, who has played frequently in the UK. There is something agreeably old-fashioned about Gluzman’s playing, warm, committed and not afraid to wear its heart on its sleeve, the very antithesis of clinical coolness. He is also remarkably secure in the violin’s stratospheric upper reaches, no mean advantage in this particular music, added to which he brings a real sweetness to lyrical passages. (Significantly he has received the Henryk Szeryng Foundation Career Award.) Bělohlávek produced an understated accompaniment which nonetheless fitted Gluzman like a glove. There was an encore, the first, Bach-obsessed movement of Ysaÿe’s Second Sonata.

Continuing the between-movement applause problem, Dvořák’s brooding D minor Symphony – Tovey placed it alongside Brahms’s four and Schubert’s ‘Great C major’ as one of the six greatest symphonies since Beethoven – should have been the evening’s highlight. Although thoroughly creditable with much beautifully dovetailed detail and exemplary balances, it failed to ignite or raise the blood pressure, the music ‘closely observed’ but seldom ‘experienced’.

Symptomatic of this was Bělohlávek’s treatment of the poco accelerando at the close of the first movement; he observed this precisely but the build-up to that moment of release was so lacking in tension that it felt gratuitous rather than inevitable. Frankly – and I have the highest respect for Bělohlávek and he was also on home turf – one would have expected more. In 1958, at my first-ever Prom, Malcolm Sargent – heard from more or less the same seat – swept one along and brought raw excitement to this wonderful music.