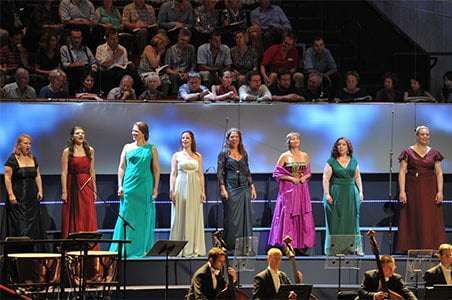 The Royal Albert Hall felt like a bear-pit for this performance of Richard Wagner’s Die Walküre, the ‘First Night’ of his four-part epic music-drama Der Ring des Nibelungen. Into the sweaty and heady mix of the Hall’s hot air were thrust the brutality of the characters’ conflicts and passions: domestic bitterness between Sieglinde and Hunding; the former’s incestuous passion with her twin brother Siegmund (Siegfried will be the heroic offspring of that abominable union); a wife (Fricka) who knows best and causes grief for her husband (Wotan); and the latter’s unbearable sorrow for his daughter Brünnhilde’s disobeying of his orders. This opera is about the manifestation of different kinds of love, how it gestates, what love is, and what it means to different people. That evolution of love spread itself across the whole evening as a giant arc, and is what made this performance such an inspirational triumph.

Typically, a superb cast was assembled for this instalment of the tetralogy. Nina Stemme is scheduled to be Brünnhilde throughout, but the Wotan of Bryn Terfel was for this evening only; Eric Halfvarson, who sang Fafner in Das Rheingold, was Hunding, and Ekaterina Gubanova reprised her svelte Fricka. Once again, Staatskapelle Berlin’s members put in a sterling performance, whether in consort or as individuals, and Daniel Barenboim’s approach allowed plenty of room for the music’s expansiveness whilst being full of detail. His tempos were generally broad and determined, but when required to conjure action he would drive the music on to electrifying effect. This was an orchestral performance full of emotion: the charge planted at the very opening during the Storm was carried to the denouement that is the frictional confrontation between Brünnhilde and Wotan. The navigation of Act Two’s dialogues and confrontations gripped, as did the thrill-ride-cum-tearjerker Act Three over which Barenboim’s cumulative overview was best realised. 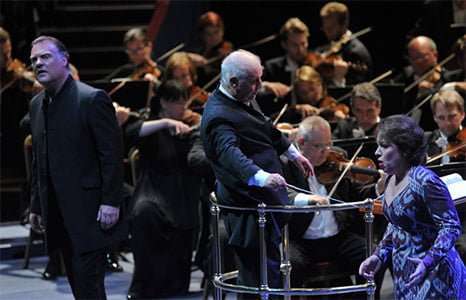 No-one of central characters – Wotan, Siegmund, Brünnhilde and Sieglinde – dominated or cast a shadow over the opera above and beyond the others, although each certainly made a mark. Simon O’Neill was in heroic form as Siegmund, throwing himself about with abandon, and letting rip with his high-flying tenor to thrill and inspire himself and Sieglinde into frenzied passion. He brooded expressively on his inner turmoil during the monologues of Act One, clear of the destination that his thoughts were taking him: ecstasy with his twin sister Sieglinde, and Anja Kampe certainly aided-and-abetted. Her opening was tentative, wary and uncertain, which, like a pair of weighing scales stacking these sentiments, over the span of the Act, shifted gradually in favour of certainty, to an ecstatic conclusion. Her subsequent earnest departure from Brünnhilde had profound musicality. Eric Halfvarson’s Hunding was much more than the one-dimensionally ruthless husband that the libretto might otherwise suggest. Within his phenomenally powerful bass was manifested an honour and loyalty to his kin, and his menace was all the more chilling because of its nonchalant dispatch. 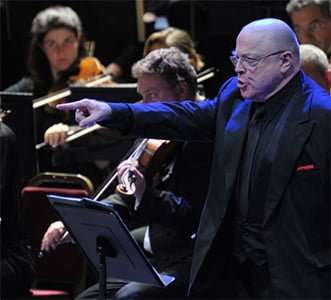 The introduction of husband-and-wife Wotan and Fricka made for an initially comic couple, Brünnhilde warning her father that the trouble-and-strife is on her way, and that she is not happy. Ekaterina Gubanova brought all the resilience and confidence to the part that she did the previous night, and demolished Wotan’s defence of Siegmund and Sieglinde’s incestuous relationship with insouciance rather than hectoring. Bryn Terfel’s Wotan has matured a lot over the years: he now brings so much emotional clout to the part. His father-crossed persona was done with regret rather than just anger: Terfel got from Wotan the father who does not want to be in the position that he is. True, his spitting-blood personae made one feel deeply concerned for Brünnhilde, but their final meeting of minds was as honest as it could ever be.

Nina Stemme’s Brünnhilde kindled the Valkyrie’s bravery and confidence, whilst in her long exchanges with Terfel at the close, the desolation and vulnerability, as well as abject fear, was to the fore. There was a heart-stopping moment when she forgot her lines that Terfel prompted her by singing it, and, a little while later, she had to look at Barenboim’s score (closed for Act One, but open for the remainder) for the next prompt. As if to make amends she powered-out thrilling top notes. There followed a heart-wrenching demise for Brünnhilde, Stemme’s soprano encased with velvet layers. The remainder of the cast was made up by the eight Valkyries, here heard from behind the orchestra over the turbulent Prelude (‘Ride’) to Act Three, or in more conversational mode later at the front of the stage.

There was much that was simply amazing during this performance, and the inexorable drive to the end compelled the audience to a stunned silence, the stage bathed in red light representing Loge encircling and protecting the sleeping Brünnhilde, awaiting the hero who will awake her…