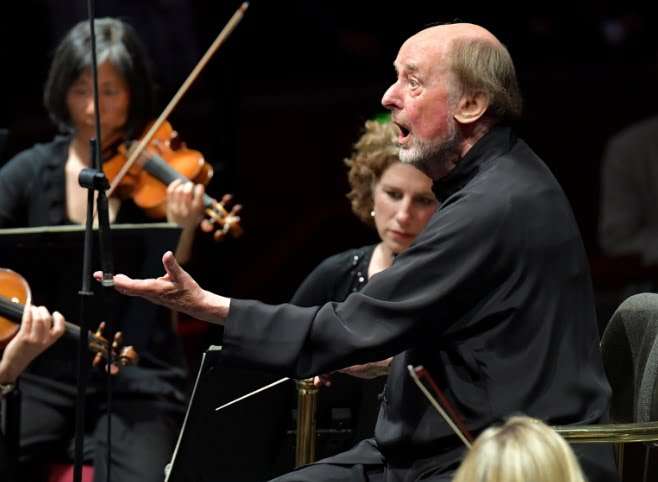 First, a nod to Shakespeare with the wonderful Overture to Béatrice et Bénédict, Berlioz’s comic-opera based on Much Ado About Nothing. Roger Norrington (Principal Conductor of the Stuttgart Radio Symphony Orchestra between 1998 and 2011 and now its Ehrendirigent, honorary conductor, a title shared with Georges Prêtre) led an exuberant and ardent performance bristling with detail and affection.

Beethoven’s innovative Fourth Piano Concerto has come my way a couple of times recently, an often-sublime Helmchen/Dohnányi account and then a questionable Zimerman/Rattle reading.

It was no surprise that between them Robert Levin and Norrington offered something different. The piano, lid-less (so no “Heave! … Ho!” from the crowd) was placed within the orchestra, Levin with his back to the empty podium, Norrington, facing Levin, seated with the strings, violins antiphonal (of course) and also the double basses (four in total). The integrated piano (a concert grand, by the way) encircled by the SWR musicians looked as if it were placed in a totally sealed terrarium, starved of oxygen, but its green shoots of sound carried effortlessly and balance was spot-on, Levin ‘first among equals’ and Norrington turning his head when he wanted to promote the woodwinds. 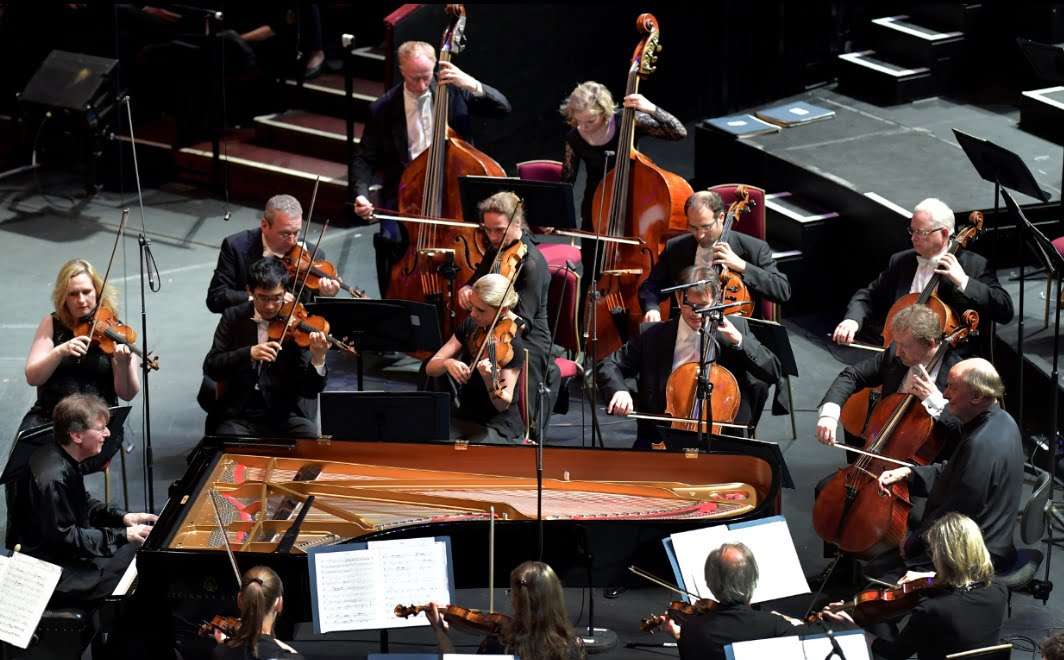 It was also no surprise that Levin arpeggiated the opening chord and that he joined in with the tuttis, which added colour but palled a little. There was lots to engage, though, for although much pianistic brilliance ensued there was also dynamic variance and flexibility of tempo and phrase, which preserved the music’s profundity, poeticism and, in the Finale, playfulness. The second-movement Andante was without doubt the marked con moto – greater breadth would have been welcome, mind – Levin rippling the piano’s calming sermon to suppress obstreperous strings before the last movement (smaller timpani now introduced) chuckled and indeed breathed, while enjoying some cheeky ornamentation from Levin and also enduring a couple of passages of extemporisation that stole thunder from the ensuing cadenza. This and the one in the first movement were improvised by Levin, to notable effect; “I do no preparation whatsoever”, he says, so there was real spontaneity with his off-the-cuff contributions being intrinsic to the work’s material, and with the orchestra ready to return at just the right spot. If not a particularly enlightening viewpoint, overall, this was certainly a very enjoyable one of a remarkable masterpiece.

Levin’s encore was doubly welcome, a passionate outing for the ‘Intermezzo’ from Schumann’s Faschingsschwank aus Wien, Opus 26, music that soars and always does so from the soul … here its ink was still wet.

Following the interval, a compelling Brahms 1, but oh for a hint of vibrato, even just a decorative fleck to enliven what can become pallid. Of course it’s one of Norrington’s trademarks (“pure tone”), although he doesn’t force its use, and over the years the Stuttgart players have become well-versed in this practice. 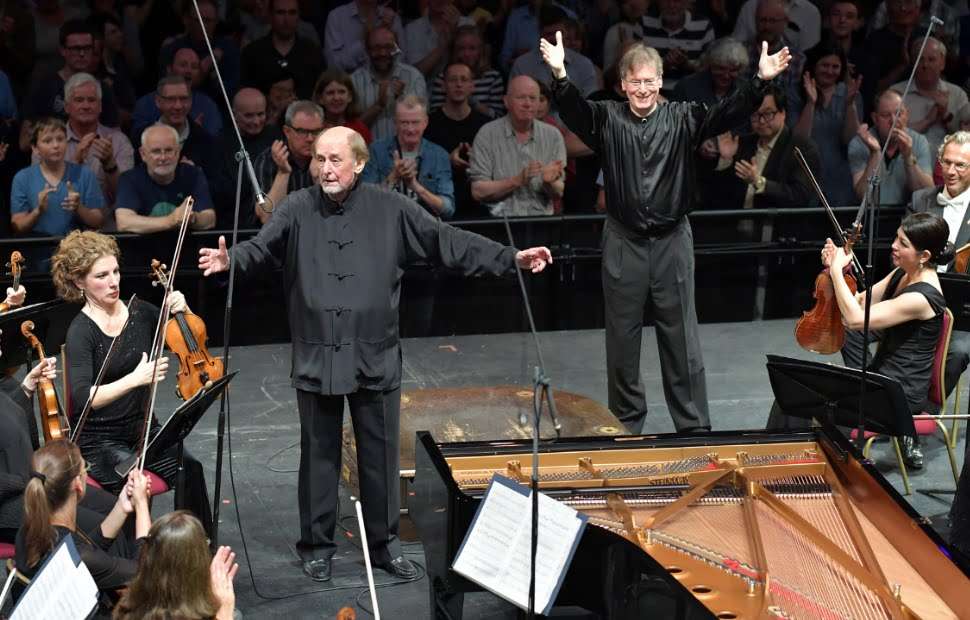 That aside, Brahms’s debut Symphony, so long in the making, was given a stimulating rendition, urgent in its introduction, nothing lingered over, and quite moderate in the Allegro (exposition repeated), which felt mathematically related to what had gone before. With woodwinds doubled (the fourth bassoon being a contra), a big although not overpowering sound was produced, the Royal Albert Hall filled amply, Norrington expressively accommodating without losing the music’s Classical lineage but also with plenty of Romantic drama. The second-movement Andante started a little hastily but settled agreeably, blest with eloquent woodwinds, fine horns and Natalie Chee’s violin solos. From a flowing third movement the triumphant Finale emerged as resplendent, as subtle as it was strong, Norrington observant of Brahms’s subito markings and (tacitly) those places where no change of speed is required, most importantly when the chorale returns in the coda, here gloriously in tempo.

Norrington had taken a long view of the Symphony and won through; a rather special performance, which was followed by a Brahms Hungarian Dance (not one of the three that the composer orchestrated), rendered fierily, tuba-player and a few others only now appearing.

We weren’t done and it was disturbing news. Natalie Chee stood, microphone in hand, to advise (or remind) in emotional terms that the Stuttgart Radio Symphony Orchestra (founded in 1945) is being merged with the Baden-Baden & Freiburg Symphony Orchestra, and this Prom was its very last concert. It seems an act of folly on the part of South West Radio to be doing this, certainly regrettable and retrogressive when the SRSO plays such an active part in Germany’s cultural life and also internationally through its many recordings. Previous conductors have included Celibidache and Neville Marriner and the Baden-Baden Orchestra once sported Michael Gielen as its maestro. 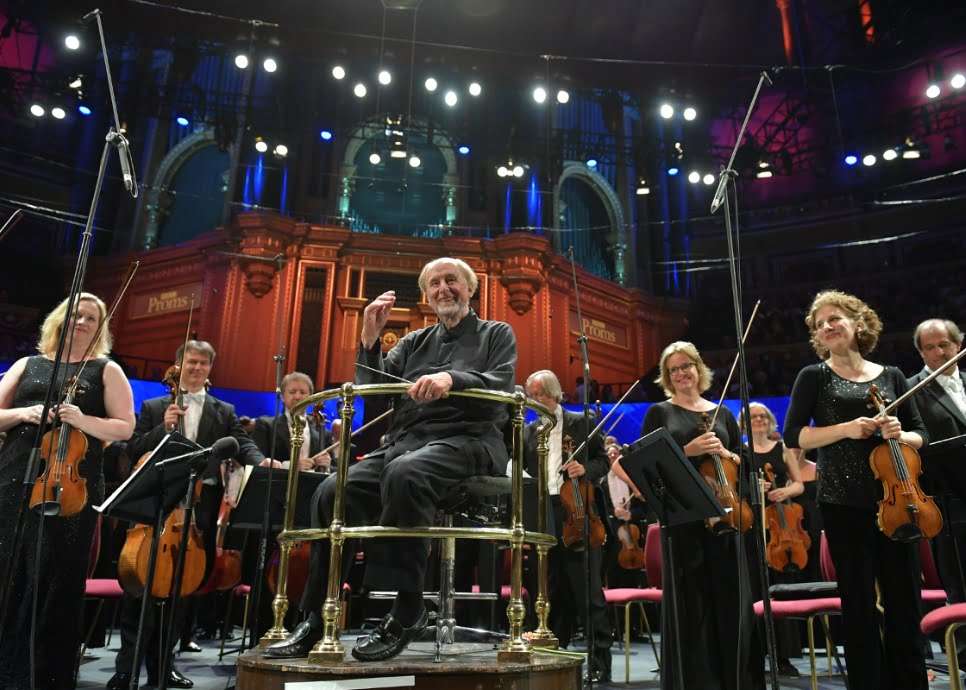 One wishes those musicians presumably soon to be out of work all the very best. Whether Sir Roger returns to the new ensemble I know not, and although one may look askance at his initiating applause (at the end of Beethoven’s first movement) and encouraging it (following Brahms’s second) – clapping between movements is the enemy of music’s continuity – he is, and this was, a good (k)night.

I was very moved by Natalie’s speech (“our hearts are breaking”) – and clearly the Stuttgart musicians hold their Conductor Emeritus (as Norrington was credited in the programme) in the highest regard – and there was no doubting the potent sentiments then collectively unleashed in Elgar’s ‘Nimrod’, the perfect choice, and so terribly poignant…