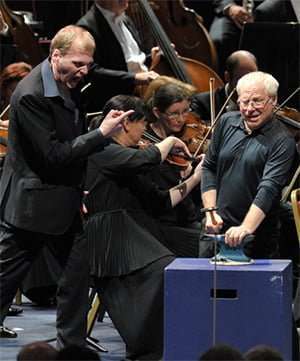 Siegfried is often considered the ‘difficult one’ of the Ring tetralogy, for a variety of reasons: the eponymous hero is an intolerable creation, given his distaste for authority and general childish behaviour. So much here worked to the opera’s favour, and Justin Way’s lucid stage-direction, which in the previous instalments had been much less intrusive, got to the heart of the music-drama. If Siegfried is the Ring’s ‘scherzo’, then there were laughs aplenty, such as during the hunting-horn calls (Stefan Dohr superb) with Lance Ryan’s Siegfried egging on the player to greater virtuosity. Placement of singers was well-judged: Rinnat Moriah gave her Woodbird from the back row of the Choir (very high up) and Eric Halfvarson sang Fafner in the area of organ console: both entirely audible. 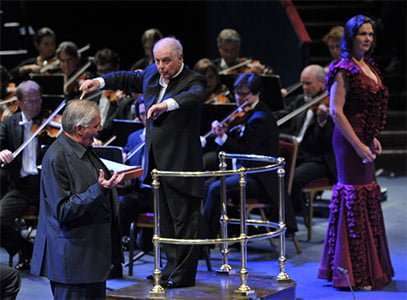 A great pleasure of this Proms Ring Cycle thus far has been the ability to listen to the music without extraneous distractions from a production. This Siegfried went beyond expectations (already high because of the previous two evenings). Orchestral details, so often muffled when the players are hidden in a pit (Bayreuth aside!), abounded; typical of Daniel Barenboim’s superb conducting and the stunning response of Staatskapelle Berlin: the Act Three Prelude was stormy without being brash, portending the doomed and resigned encounters of the Wanderer; the high strings’ transition into the same Act’s third Scene (where Siegfried encounters Brünnhilde) was of such delicate beauty and transported us to a mystical world. Although, elsewhere, much power released, Barenboim’s unerring ability to keep upping the gears – dynamics controlled superbly – meant that the ‘big’ moments really counted, and made for a seamless performance. 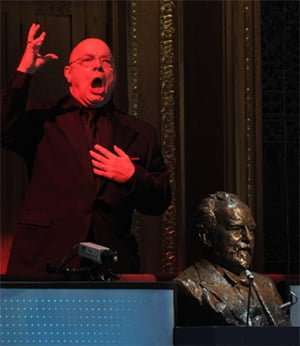 The characters in Siegfried are not all likeable: Siegfried himself is an impetuous youth who frustrates the adults; Mime, his guardian, is motivated purely by greed for Fafner’s hoard; and Alberich, like Mime, would sacrifice all for the same. The Wanderer (Wotan in disguise) is feeble, really. It is Fafner who is perhaps the most sympathetic: he just wants to while away his days in his cave undisturbed, looking after the gold that is now rightfully his. We got to understand these persons’ motivations and even appreciate their foibles. In what is a quite impossible part, Canadian Heldentenor Lance Ryan showed why he is the Siegfried of choice presently (he is about to take part in Bayreuth’s new production of The Ring). He gave a towering performance, and made the adolescent attractive and comprehensible. He was tentative at first, but his view was the ‘long’ one, knowing that he had to save himself. Not that he short-changed in Acts One or Two – a vigorous ‘Forging Song’ excited, and Act Two’s encounters had pent-up passion, but the Act Three encounter with Brünnhilde was on another level of command: he rose to notes of ridiculous difficulty with power and precision. Nina Stemme’s cameo as Brünnhilde was similarly electrifying. Required for the final scene only, her awakening and subsequent resistance to Siegfried’s entreaties was warm and heartfelt. She had the gauge of the long dialogues, and her succumbing to his cry of “Sie mein!” (Be mine!), and the ensuing outpouring of love, thrilled beyond measure. Their voices intertwined as though the bodies of lovers, to an ecstatic and orgiastic realisation. 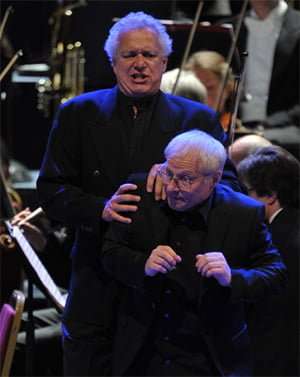 Terje Stensvold was an imposing Wanderer, but with a beating heart. He gave us a god who is of a previous world-order, of deference that is brushed aside (by Siegfried) all too easily. His Act One encounter with Mime was like a fire-side chat, Stensvold presenting the world-weary disguised Wotan’ dialogue amiably and with unforced authority, in full control against Mime’s agitation. Unruffled by Siegfried’s provocations, Stensvold maintained The Wanderer’s dignity with warm and calming tones, though his demise still shocked. Mime was made the spiteful creature he truly is by Peter Bronder, his delivery veered to the whiny and malevolent and was full of deceit. The ‘double-talk’ scene of Act Two was a particular delight; Mime’s exasperation at Siegfried’s understanding of his true nature was highlighted. With Johannes Martin Kränzle’s Alberich, the pair created a quite hateful duo without caricature. Halfvarson presented Fafner as a victim, the poor giant who was cheated by Wotan and suffers the curse of the Ring (he murdered his brother Fasolt for it) in solitude disguised as a dragon. Halfvarson’s bass boomed with malevolence and all the years of isolation, and with superb diction. Similarly, Moriah’s Woodbird soared, and was a reassuring guide for Siegfried. Anna Larsson’s Erda brooded on Wotan’s requests, her warnings conveyed in somnolent tones.