“The BBC’s first ever Relaxed Prom is suitable for children and adults with autism, sensory and communication impairments and learning disabilities as well as individuals who are Deaf, hard of hearing, blind and partially sighted.” [BBC Proms website]

Reviewed by: Martin Anderson with son Alex (aged 7), and other family members 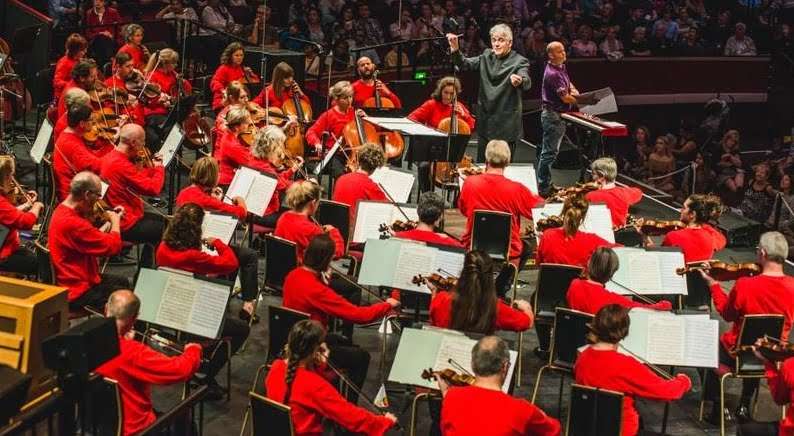 Last year one of the two CBeebies Proms, this year the first Relaxed Prom – I seem to have become the Classical Source fall-back “kids’ Prom” reviewer since my seven-year-old son, Alex, has bestowed a credibility in such matters that I would lack as a lone adult. It’s certainly true that his reactions and those of all the other kids in the Royal Albert Hall give a measure of the effectiveness of such programmes, but these children come with their parents and grandparents, and this Relaxed Prom engaged the entire audience far more effectively than that CBeebies Prom I attended last year. The Proms website announced this Relaxed Prom – planned in conjunction with the Royal Albert Hall Education & Outreach team – as listed above; it would be, moreover, “a fun and interactive musical experience in a welcoming environment, with plenty of opportunities for participation.”

Classical concerts are lamentably passive affairs as far as the audience is concerned. In almost any other form of music-making, the first thing a musician will do when he or she arrives is start to speak to the audience. At classical concerts we file in and sit down, and then the musicians come in, bow, play, bow again and leave; there’s not even a “Good evening, nice to see you.” Concerts for children – whether with disabilities or not – can’t be like that, and the phrase “plenty of opportunities for participation” explains why this Relaxed Prom was far more successful than last year’s CBeebies event: it held the attention of an audience you might reasonably expect to have a fairly short attention-span because it engaged with them throughout its hour-long duration.

And that engagement had been thoroughly thought through. The concert was presented by Andy Pidcock, with Grant Llewellyn conducting the BBC National Orchestra of Wales, and their interaction was almost always referred back to the audience for a reaction. On the left of the stage was a signer, translating the banter for the deaf and hearing-impaired, and a deaf poet, who had made up poems in sign language, which she told, if that is the right word, during the music. Two screens above the orchestra and one behind it showed simple instructions (“Look”, “Clap your hands”, “Join in” and so on, with explanatory images), so that the audience was never left wondering how it should be responding. The programmes were given out free, with the items listed in words on page three and then with icons on page five. As well as information on the musicians, it also contained a word-finder game using the names of the instruments of the orchestra (that kept Alex occupied for ten minutes or so).

Pidcock began by getting the audience to clap its hands, and then to wave in time to the music – and the little girl next to me, wearing a bulky set of headphones to boost her hearing, turned to me and asked why I wasn’t waving. Grant Llewellyn (“My name’s Grant” – everyone was introduced with first names) had just begun to enjoin us in conversation when a young lad with a backpack suddenly ran across the stage in front of him and made for the stage-door; a few seconds later, his mother (I assume) came belting out of the crowd in the Arena and went chasing after him. Llewellyn watched them disappear before turning back to us with the comment: “Well, this really is a relaxed Prom!”. 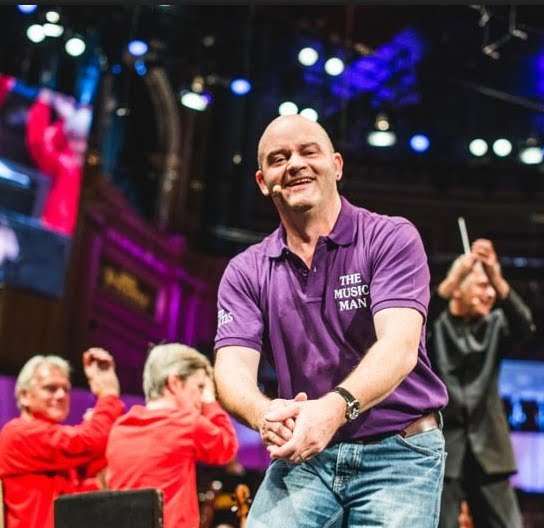 Every detail had been seized upon for audience-interaction: Llewellyn got everyone to roll their Rs liberally in “RRRRRRossini” before he conducted the gallop from the William Tell Overture. The NOW’s piccolo player, Eva Stewart, turned up wearing a bumblebee costume (no prizes for guessing what she played) and gave him a baton with a beribboned bee on the end to direct that piece. The NOW musicians have been working with pupils from the Ysgol Tŷ Coch School in South Wales, “a local school catering for children with severe learning difficulties and those with Autistic Spectrum Disorders”, and a short film was shown (everyone greeting the viewers, of course) before the children themselves joined the orchestra to perform a simple little piece – once again, getting the audience to join in. Another example: Llewellyn asked us to conduct Brahms’s Sixth Hungarian Dance along with him and see if we could cope with the changes of tempo. Pidcock interrupted Johann Strauss II’s Blue Danube Waltz and asked the musicians to play a rather crude one he said he had composed – and we were asked which we preferred. He pretended not to know Pharrell Williams’s ‘Happy’ until the kids were yelling the name of the song out at him (not me: my ignorance was genuine, and everyone except me seemed to know the song ‘AEIOU’ – which Pidcock used to teach those letters in the signing alphabet). The Doctor Who theme music was introduced by the voice of a Dalek from somewhere in the Hall – over and again, thought and imagination had gone into making the event work for this particular audience.

Often it’s what you don’t do that makes things work. The orchestra was colour-coded: the strings were wearing red jerseys, the percussion green, and so on, and Llewellyn duly introduced each section and its instruments by asking if people knew what they were – and thousands of voices (Alex’s loud among them, I’m proud to say) yelled back “Cellos!”, “Clarinets!” and so on. But we didn’t get the whole orchestra all at once, which might have been putting too much information in front of these young listeners; instead, Llewellyn got each section to wave hello and then, “so you can hear what they sound like”, to play a little snippet of music (all from films, I think – Star Wars?) between the main items of the programme.

The most important phrase in all economics is Adam Smith’s dictum (in Book Two of The Wealth of Nations) that “Consumption is the sole end and purpose of all production”. Last year’s CBeebies Prom lost sight of that injunction, but this concert was designed entirely with its consumers in mind and worked a treat! And it has something to teach us adults about classical concert-going as well.