My Fair Lady
Book & lyrics by Alan Jay Lerner with music by Frederick Loewe – based on Pygmalion by George Bernard Shaw [performed in the orchestrations by Alexander Courage, Robert Franklyn & Al Woodbury as supervised and conducted by André Previn, who also composed original material, for the 1964 Warner Bros film] 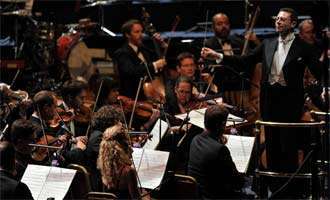 1956, opens on Broadway. 1958, hits London’s West End. 1964, Lerner & Loewe’s musical is made into a starry film directed by George Cukor with Audrey Hepburn and Rex Harrison. 2012, My Fair Lady reaches the BBC Proms for a fully staged and costumed performance.

Of course, as is often the case with great works of art, the journey from concept to creation can be a bumpy one. While George Bernard Shaw was alive he refused to allow a musical adaption of Pygmalion to be made. However, upon the writer’s death in 1950, film producer Gabriel Pascal asked Alan Jay Lerner to write a musical of the play.

However there were structural problems that made making an adaption very difficult – Rodgers & Hammerstein and Noël Coward had refused to even try – so the project was abandoned. In the intervening two-year period Pascal had died and Lerner began to think once more about Pygmalion. Chase Manhattan Bank held the rights to Shaw’s drama with Lerner and Frederick (Fritz) Loewe as well as MGM seeking the rights. MGM executives called Lerner to try and discourage him but Loewe said to Lerner, “We will write the show without the rights, and when the time comes for them to decide who is to get them, we will be so far ahead of everyone else that they will be forced to give them to us”. The show was completed. 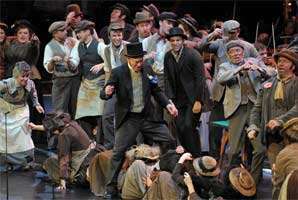 Noël Coward was originally offered the role of Henry Higgins but refused, suggesting Rex Harrison instead. After Mary Martin turned it down, a young Julie Andrews took the part of Eliza Doolittle – Moss Hart, the original show’s director, having discovered her in her Broadway debut in The Boyfriend. The show was an immediate success and held the record for the longest running show (2,717 performances over nine years) until Fiddler on the Roof broke it in 1964.

In 1962 Warner bought the film rights to My Fair Lady and in 1964 a film adaption was released. Loewe had retired after the success of Camelot and so musical supervision was handed to André Previn – an obvious choice since he had arranged and conducted the 1958 musical film Gigi, and had had a hit alongside Shelly Manne and Leroy Vinnegar with jazz arrangements of songs from My Fair Lady.

With orchestrators Alexander Courage (who penned the original Star Trek theme), Al Woodbury and Robert Franklyn, Previn enlarged the pit orchestra of 26 players to over 70 and added a significant amount of underscoring for the film version. Many of the more delicate orchestrations found in the stage production (by Robert Russell Bennett and Philip J. Lang) were beefed up for the film and lose much of their charm while gaining unnecessary accompaniment. There are however occasions when the show benefits from the larger forces: in the ‘Embassy Waltz’ swirling strings and sparkling percussion bring Vienna to Hollywood. 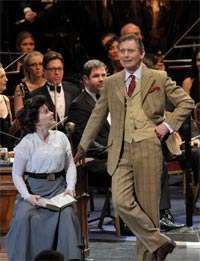 With a cast in rehearsal for weeks this has to be one of the most ambitious Proms of recent years. Everything had to be memorised. Apart from a tiny slip in ‘With a Little Bit of Luck’ the show played out without any noticeable lapses. Props aplenty including a device that belched fire as Higgins and, less successfully Eliza, explained where “hurricanes hardly ever happen” made so much more of what was described as “semi-staged”. Josh Prince’s choreography utilised the full width and depth of the space available to remarkable effect, including a full Viennese waltz. Shaun Kerrison’s direction kept the dark sadness of Shaw’s play, at times with a poignancy that hushed the capacity audience to breathless silence.

Much of Shaw’s dialogue was transferred verbatim making for many a powerful and dramatic moment – none more so than in the argument that ensues between Higgins and Eliza after they return from the ball. This was acting worthy of any theatre and it’s a pity that there were no cameras to record the occasion. The film score excellently deflates this scene – better than in the stage production – as the music shifts, without a break through brief reprises of ‘Just You Wait’ and ‘On the Street Where You Live’ with some dialogue into the powerful declamation of ‘Show Me’. 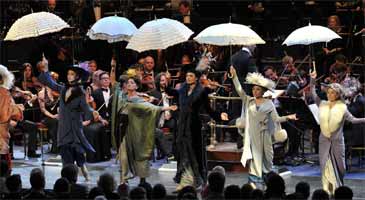 Annalene Beechey’s Eliza who started the evening unsurely with modest expectations of a simple room with an enormous chair was, two hours later, a much more confident woman: “Sing me no song! Read me no rhyme! Don’t waste my time, Show me!” This is a monumental role covering the whole gamut of human emotion, voice and characterisation; Beechey’s performance was sublime and her character wholly believable.

John Wilson and his Orchestra fizzed from the very first note of the Overture, the conductor’s attention to detail shining through. There were occasional timing problems caused by the positioning of the players behind the singers but this was a mere irritation lurking amongst excellence. The masterpiece that is My Fair Lady has never left the repertoire. Despite the brevity of their work together, Lerner & Loewe’s contribution to musical theatre is one of the greatest of any collaboration.