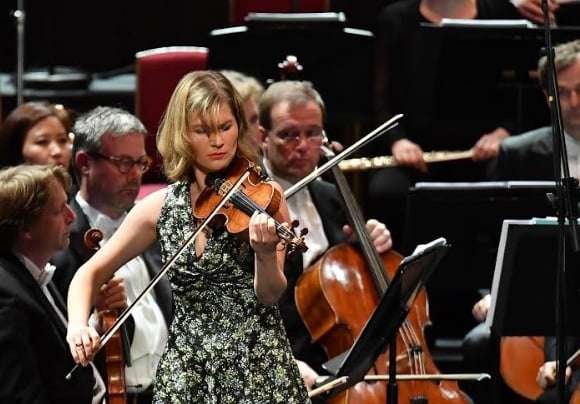 The end of the Proms season was upon us a little early to close this invigorating concert by Staatskapelle Berlin and Daniel Barenboim. He decided, for whatever reason, to play Elgar’s Pomp and Circumstance March No.1 (aka ‘Land of Hope and Glory’) to a bemused audience. But it merely characterised Barenboim’s view of Elgar; a no-nonsense approach in which attention to detail is paramount. It was, indeed, a ‘quick march’ with tremendous energy and gusto. Thus this Prom – containing two composers, one a Barenboim favourite, and one he normally avoids, Sibelius – finished.

Sibelius’s Violin Concerto, with Lisa Batiashvili, opened the evening with a whisper. There is no more beautifully serene beginning to any work in the violin repertoire than this. Our two protagonists were perfectly in accord, although this dream-like sequence took a little time to get going. Barenboim was scrupulous and offered wonderful support to a soloist who avoided whimsy in favour of the structure of this unusually laid-out work. In this hall, she found it difficult to avoid being covered by the accompaniment towards the end of the slow movement where the violin moves progressively higher and higher against a louder and louder orchestra thus losing one of Sibelius’s most memorable acts of romanticism. The Finale, a true danse macabre, was bracing, Batiashvili’s virtuosity to the fore. The forward thrust never relented and the moments of poetic insight, a passage on harmonics for instance, were tossed off in supreme style. Audience approval did not produce the expected encore, nor was it needed after such a rewarding half-hour. 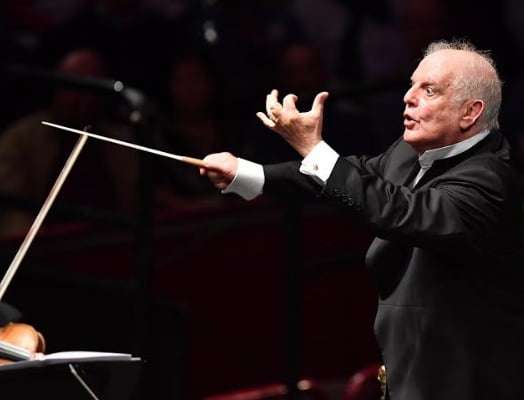 Perhaps Barenboim avoids Sibelius because the slightly remote Finn (from mainstream European musical style) wrote such spare scores, even in the Concerto. No such worries seem to occur to him when guiding us through the full-blown sonorities of Elgar’s glorious First Symphony. It was the subtleties that struck home from the very beginning where he gave careful attention to the dynamics of the opening motto melody before launching his players into the maelstrom of the first movement. Further evidence of careful preparation came in the middle movements. The spirited Scherzo never lost its opening (and threatening) pace and gave way in the quietest possible manner to the ethereal Adagio where the strings, in particular, reduced their tone to a miniscule sound.

The Finale is difficult to bring off successfully because Elgar returns to a suggestion Imperial glory (which André Previn once suggested put American audiences off Elgar’s music). But the most beautiful entrance of the strings-led countermelody was a highlight of this performance, and must have brought tears to lots of eyes, mine included. However, the Finale’s denouement missed the important point Elgar sought to achieve when, literally, attacking the return of the motto with dissonant clashes from low strings and percussion. Maybe this is where Elgar’s interior world, one of anxiety and self-doubt, escapes Barenboim’s refined sensibilities, but he still adores the music’s romantic surges as he has done for so many decades.

It was a return to Sibelius for the first encore, Valse triste (originally part of the incidental music for Kuolema), given with tender care. Once asked why Sibelius features so little in his repertoire Barenboim replied that his friend and mentor Sir John Barbirolli was so profound and complete an interpreter of the Finnish master’s music that he had little else to offer audiences. Perhaps now, with Sir Simon Rattle soon to transfer from Berlin to London, Barenboim may take up with Sibelius’s Symphonies. Given his delight in achieving near-silences in his music-making he seems a natural ally for the miracles of imagination to be found in the Finn’s great cycle.