“The world premiere of a new show, with classical favourites for all the family – including music by John Adams, Debussy and Shostakovich – plus specially filmed new Wallace & Gromit animations, featuring the dynamic duo’s backstage exploits as they prepare for the first performance of Wallace’s brand-new Proms commission, My Concerto in Ee, Lad. And A Matter of Loaf and Death, screened for the first time with a live orchestral soundtrack.” [BBC Proms website] 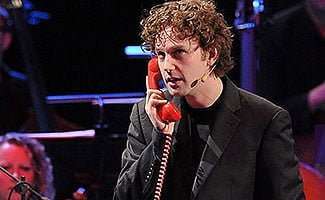 In my review of the first Doctor Who Prom on the equivalent Sunday four years ago, I ended by suggesting there should be a Wallace & Gromit Prom. Here we have it, even if things didn’t quite go according to plan.

Regular readers will know that I always review the “Family Prom” – not because I draw the short straw or because the editor’s a brute, but because I am fascinated by the way classical music can be introduced to audiences and because the Proms does it so fantastically well. The amount of collective effort, time and – given the unique ten minutes, specially created Wallace & Gromit footage – that went into this Sunday afternoon went into the stratospheric realms of ‘labour of love.’

As ever in the still-new tradition of Family Proms, there’s evolution, here in the dismissal of a presenter, or – rather – the amalgamation of that role with the conductor. Nicholas Collon is as consummate a presenter as he is an excellent conductor. Hiatus-dealer too. About 20 minutes in, just after Monti’s Czardas, he left the stage with Tasmin Little and stayed there for an age, while a couple of technicians investigated something under his special podium. When Collon returned he covered by saying “that’s what comes of leaving preparations to Wallace & Gromit.” The podium was Wallace’s special invention, a “Semiquaver Time Saver”, complete with a railway swing barrier, a red telephone, a shelf for a cup of tea, a plate of crackers and a pneumatic tube, for express sheet-music delivery.

Collon started with Copland’s Fanfare for the Common Man – his trumpets and trombones, horn and percussion spot lit. He explained that Wallace was the archetypal common man (indeed, we’re all made from Plasticine, at heart…) and went on to introduce Wallace & Gromit (Wallace struck from the playlist) with Julian Nott’s unmistakable, brass-band-like, theme music. A filmed excerpt revealed our heroes backstage making final preparations for Wallace’s Concerto in Ee, Lad – even if Gromit pushes the piano down a slope and through the floor. Crisis looming, we moved back to the main stage for what – third time lucky – was John Adams’s Short Ride in a Fast Machine, starting with the smallest instrument in the orchestra, the wood-block (twice the Adams has been pulled – after Diana, Princess of Wales’s death and from the last night in 2001, refashioned in the face of ‘9/11’). It was worth the wait, as the members of the much-enlarged Aurora Orchestra (about five times the size of what can be fitted on to its home stage at Kings Place) proved their worth in every piece.

Tasmin Little – whose smile seems chiselled out of the same stuff as Wallace’s – was the guest for Monti’s Czardas – simply there as one of Gromit’s favourite pieces (he is, wouldn’t you know, the proud owner of a Stradivarius). After the extended gap, Collon introduced three pieces of music which were accompanied by scenes from three of the four television adventures (The Wrong Trousers, A Close Shave, and A Matter of Loaf and Death) and the one feature (Curse of the Were Rabbit), illustrating the baddies our heroes have faced (to Stravinsky’s ‘Infernal Dance’ from The Firebird) and Wallace’s amorous exploits (to Debussy’s Clair du Lune). Some of these clips bordered on the post-watershed, especially Lady Tottington in Curse of the Were-Rabbit fondling her melons. Ahem! Finally Collon accompanied various chase sequences (a given in any of Wallace & Gromit’s films) with the fugue from the first movement of Shostakovich’s Fourth Symphony (a real work-out for Aurora’s strings), prefaced by the snarling march for woodwind.

In between, on the various big screens, we saw some of the improvements Wallace had made; he had a hot-rod piano on wheels (with stencilled flames on the front) which overheated; he fashioned a self-playing piano, which overheated and self-immolated. Even before that, a spill of tea fused the lights, the stage lights went off (but thankfully not the players’ stand-lights) and while Wallace groped around in the dark looking for the fuse box in the depths of the Royal Albert Hall, we heard him worrying to himself in between the grand opening chords of Mozart’s Magic Flute Overture, of which we got half. 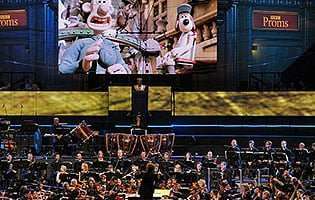 But with Wallace’s solo instrument destroyed, what to do? He sends a message via the delivery tube, to instruct Collon to “fill” – wondering “do you know any good tunes?”. Collon asks the orchestra, and the trumpets pipe up with the Wallace and Gromit theme, but we’ve already had that. What follows, with Collon introducing families of instruments and individual instruments by turn was akin to Britten’s Young Person’s Guide, but melded Gershwin’s I got rhythm and the Wallace and Gromit theme tune in an unfolding set of colourful variations, eventually credited to Ian Farrington. But still no Wallace Concerto in Ee, Lad…

As ever, it was Gromit that saved the day. He took up manuscript paper and pen and set down a little ditty that was sent up the tube to be announced by Collon as “Double Concerto for violin and dog” – not the Bark Double, it seems – as, just like Bach’s, this was a double violin concerto, started by Gromit on his Stradivarius on the screen, dove-tailing with Tasmin Little who – thankfully – hadn’t left the building. As to Gromit’s amanuensis (if anyone) there was no mention, but his Concerto – a single movement work – built to an impressive climax, the two solo lines having intertwined beautifully. Wallace was cock-a-hoop crashing cymbals back stage in sheer relief.

After the interval, we had a complete showing of Wallace & Gromit’s latest adventure – A Matter of Loaf and Death – with the two plying their trade as bakers, unwittingly being hunted down as the last of (literally) a baker’s dozen by one-time Bake-a-Lite girl, Piella Bakewell, who has eaten too much of what she advertised and can no longer float in the Bake-a-Lite balloon, so she aims to rid the world of bakers. Thankfully Gromit, this time aided and abetted by Piella’s pooch, Fluffles, saves Wallace and the day, resoundingly accompanied by the Aurora Orchestra. How the film section played out over BBC Radio 3 might be more debatable, but cameras were there for future television broadcast.

But I have to report that Gromit’s musical career might have been snuffed out before it began. Despite Wallace’s own warning that Gromit (“a regular Poocini”) should keep his Stradivarius safe, we knew what was coming … Wallace sat on it. So goodness knows whether we’ll be able to welcome Wallace & Gromit back to the Proms, but I do hope so.