“Celebrated French organist Olivier Latry returns to the Proms for the first time in over a decade. The organist of Paris’s Notre-Dame Cathedral roams through 250 years of music in a wide-ranging recital that stretches from Bach to de Falla.” [BBC Proms website]

Reviewed from live BBC Radio 3 broadcast… As the author of five books on rock music and musicians, including the first in-depth study of the life and work of Madonna (which was serialised for a week in The Sun newspaper), as well as a detailed book on the great Broadway shows which have been made into memorable Hollywood movies, alongside the first book in English on the greatest living Russian composer, Vyacheslav Artyomov (eighty next year), plus other writings, I trust I shall not be considered elitist when I say my initial reaction on reading Olivier Latry’s programme for the single organ recital Prom this year was that a golden opportunity had been sacrificed on the altar of fashionable populism. 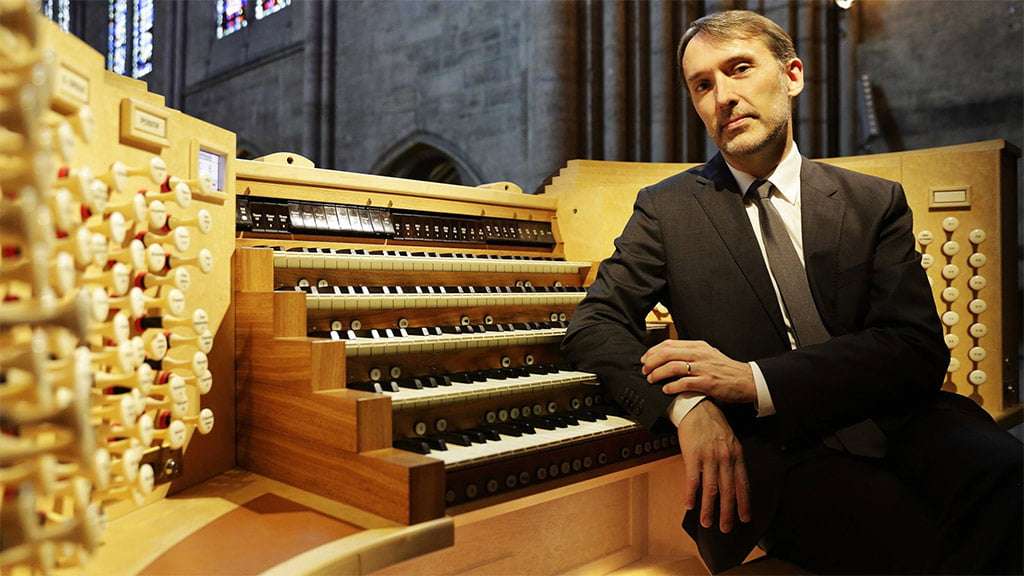 But as editor of the quarterly journal The Organ (devoted exclusively to instruments and their repertoire in churches, cathedrals and civic buildings), and having lobbied for some years for a single annual Prom to be devoted to the instrument’s vast repertoire, one has to be grateful for mercies, however small, and realise that we have to start somewhere in terms of building an audience.

Even so, was it really necessary to compile a programme of which ninety-five-percent was made up of transcriptions and arrangements? Why was the great repertoire as originally conceived for The King of Instruments (Mozart’s term) simply ignored? I refer to the repertoire of Buxtehude, J. S. Bach (we’ll come to that in a moment), Handel, Mozart, Mendelssohn, Liszt (likewise), Saint-Saëns, Franck, Tournemire, Reger, Dupré, Messiaen, Hakim – to say nothing of British composers – in “the world’s greatest classical music festival”.

If this programme was designed to introduce listeners to the organ, it was as though one might seek to interest people in the orchestra through arrangements of the ‘Moonlight’ Sonata or the ‘Minute’ Waltz.

It was certainly not planned to attract British organists, most of whom would be in church at 11 a.m. on a Sunday, wondering what to play as the congregation leaves. And if it was felt that Khachaturian’s Sabre Dance, belted out on the great Henry Willis instrument this Sabbath morn was the best way of attracting a new audience, then – as this piece was a Top Ten hit on five occasions in the 1940s, and once (for the Love Machine) in the 1960s – such a view is at least sixty years out of date.

But Sabre Dance is loud and rhythmic and certainly does not demand intellectual attention from listeners. In terms of its gee-whiz factor, Latry’s virtuoso account of a transcription by one Kivinieni, certainly blew away any overnight mental cobwebs. But to follow with another whiz-bang piece, Falla’s Ritual Fire Dance, was hardly intelligent programming. However, Latry’s delivery of his own transcription was certainly crisp and fast and cleverly calculated for maximum clarity in this acoustic.

Even the solitary piece by Beethoven was not composed with an organ in mind; his Adagio in F for mechanical clock was the first of a group of five pieces for unknown instrumentation found after his death. It has been convincingly ascribed to the same clockwork instrument Mozart wrote for. Although dating from around 1799, this is merely a chip from the workbench – a curiosity, no more, no less. Musically, however, it does fit the organ better than any other instrument, but the nature of the music – as with Mozart’s piece – makes it difficult to phrase convincingly, although one must applaud Latry’s enterprise in including the work and for doing his best to sustain interest in it.

Bach’s BWV565, D-minor Toccata and Fugue, the most famous of his accepted organ works, has not invariably been considered an authentic piece by the master – an earlier version for violin has convincingly been put forward – but for almost all scholars, organists and music-lovers, this undeniably thrilling music is counted as being amongst Bach’s original works (though the absence of an authenticated manuscript in Bach’s hand will always raise a doubt).

For an audience such as this programme was planned, subtlety in performance is not a prime consideration, and it may be that the general impression of a routine account on this occasion does Latry an injustice, although it cannot be denied that the inherent drama in the music was well-enough conveyed. Bach was also present – in the shape of music from his Cantata 68 – as recomposed by Eugène Gigout in his Air célèbre de la Pentecôte, an utterly inconsequential piece, unworthy of inclusion.

Nor can one condone the late Jean Guillou’s arrangement of Liszt’s Prelude and Fugue on BACH, although one may understand Latry wishing to pay tribute to the French master, who died in January aged eighty-eight. As Liszt published this original organ work in two versions, both of which are eminently playable (with a virtuoso technique! – he also made two versions for piano), one cannot disregard Guillou’s intervention – although he does make it easier for the organist. Latry’s performance was broadly acceptable in itself, for this music was surely written with a large instrument in mind.

The Albert Hall organ, in its time played by Bruckner and Frank Zappa, fitted the music very well; one’s only caveat being the clapping which greeted the end of the Prelude as Latry prepared to begin the Fugue. This unwarranted hiatus could not but destroy the work’s musical thread. In such circumstances, Latry’s interrupted sense of structure could be excused, although he did recover well. Those who want to hear this masterpiece as it should be played, without alterations by others, should acquire the magnificent recording by Simon Preston.

Bach/Widor followed; the fourth of the Frenchman’s Bach re-compositions; a curiosity, certainly, but another trifle which did not merit inclusion. Saint-Saëns also played the Albert Hall organ, and must have been tempted to extemporise upon his Danse macabre: here was an effective transcription by Edwin H. Lemare which was very well played and brilliantly, dramatically, registered.

The final item was an Improvisation by Latry on Berlioz themes. In this ostensibly never-before-heard piece, Latry laid out his box of tricks, saving the subtlest for the closing pianissimo bars, when everyone – including your correspondent – expected a roaring coda. Well done, Olivier!

His playing demanded an encore, which was the Toccata from Léon Boëllman’s Suite Gothique, and one hopes an organ concert or two (Sunday afternoons?) may now become a regular event at the Proms – with real organ music rather than transcriptions, so that one may even agree with the (over-)enthusiastic Radio 3 announcer, who declared Latry’s recital as “mind-blowing”, thereafter instructing us to “have a lie-down”. She should get out more.