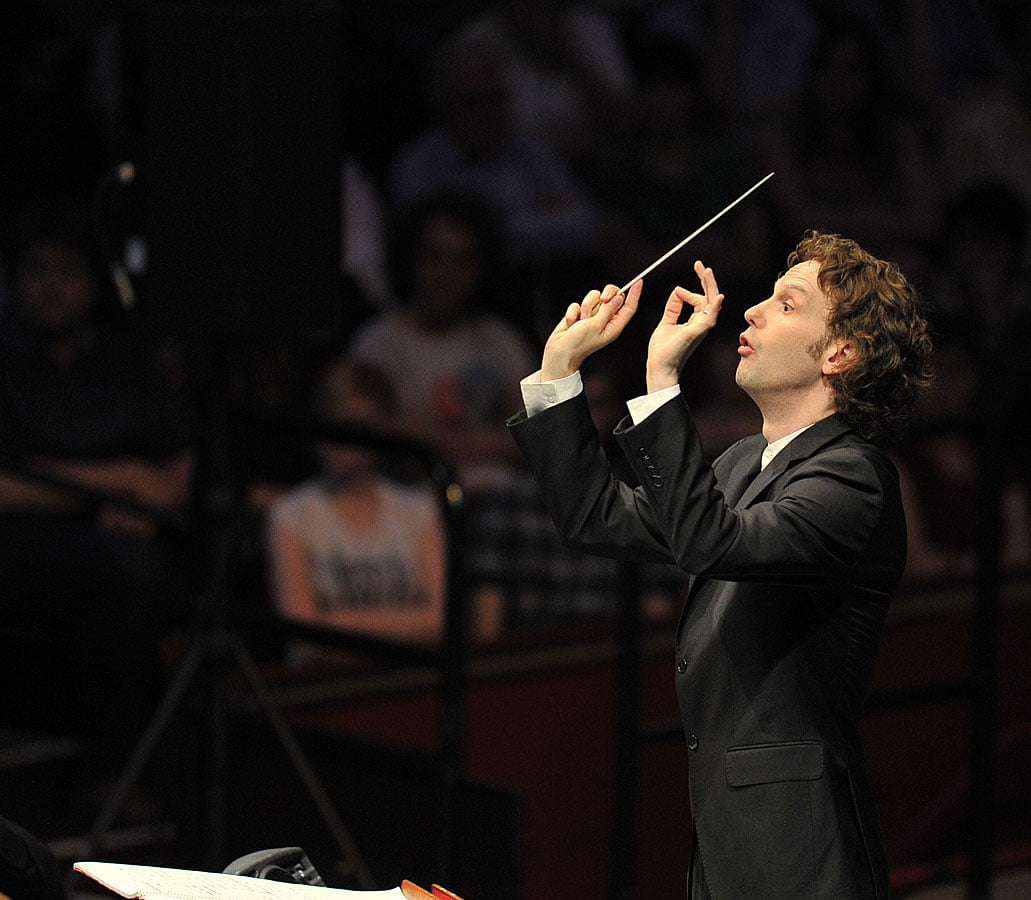 There were also at least three phenomenal feats of memory – not just from the players in the Meredith and Beethoven, but also Francesco Piemontesi, playing the Piano Concerto from memory (yes, of course, most soloists do, but it’s nice to be reminded about it occasionally), and Collon himself, who conducted the second half from memory, too.

With Alina Ibragimova’s pair of late-night Bach recitals completely from memory, this was a weekend designed to chime in with a Proms theme. It will also continue into the Autumn Season with the BBC teaming up with the Welcome Trust to investigate just how music affects us, and also into the Aurora’s own Southbank Centre series it revisits Mozart’s Symphony No.40.

First, the pair of Pastorals. Coinciding with Aurora’s latest release (on Warner Classics), the opener was Brett Dean’s Pastoral Symphony (2000). A portrayal of the natural wonders of his native Australia and the impinging on it by humanity, it opens with eerie scratching on solo strings with taped birdsong. Later there is, again on tape, the destructive chopping sound ending in a falling tree, mirrored by a more cataclysmic crunch of devastation wrought by unthinking humans. It’s a thought-provoking and succinct piece of musical agitprop; all the better for not relying on text (the downfall of some others of Dean’s ecologically bent works).

By contrast Beethoven’s ‘Pastoral’ was, well – pastoral: nicely played – pliant yet purposeful. Anyone listening on the radio would surely have been pleased, but they would have no indication that the Aurora members were playing from memory or, indeed, that apart from cellists they were all standing (and that the trombone and timpani players only took their places after the second movement). In the Hall I remained puzzled about the standing. Yes it afforded a closer formation, and – unlike the Mahler Chamber Orchestra – string-players felt unrestrained enough to waft and weave with the music – but did it really enhance the playing, or help with remembering the notes? Perhaps I’m still smarting from the London Chamber Orchestra’s attempt nearly 25 years ago (at the then Hammersmith Apollo) where its members were going to convert the youth to classical music by standing up and being awash with flashing lights… 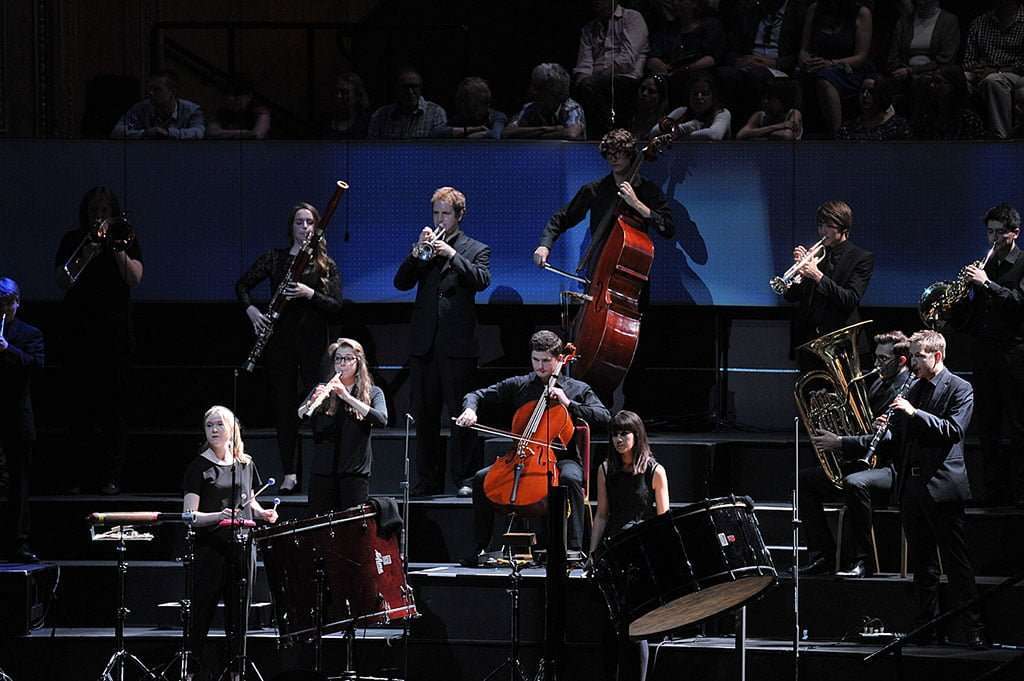 As it happened we did have flashing lights, to much better effect, in Anna Meredith’s Smatter Hauler, a reference to Sherlock Holmes’s description of handkerchief thieves; latter-day Artful Dodgers. Here the ranks of woodwinds and brass plus cellos and double basses were arrayed across the back risers of the stage, fronted by seven percussion players each with a small battery of instruments centred round a bass drum. Snatches and phrases were snatched between groups of players, lit separately after a start in darkness (how that will appear on the televised version, I’m not sure). The digital panels at the very back of the stage, beneath Sir Henry Wood’s bust, also displayed geometric patterns (which will show well on TV). It all coalesced into a vibrant few minutes played with aplomb (and from memory) not only by members of the Aurora Orchestra, but also members of the BBC Proms Youth Ensemble. 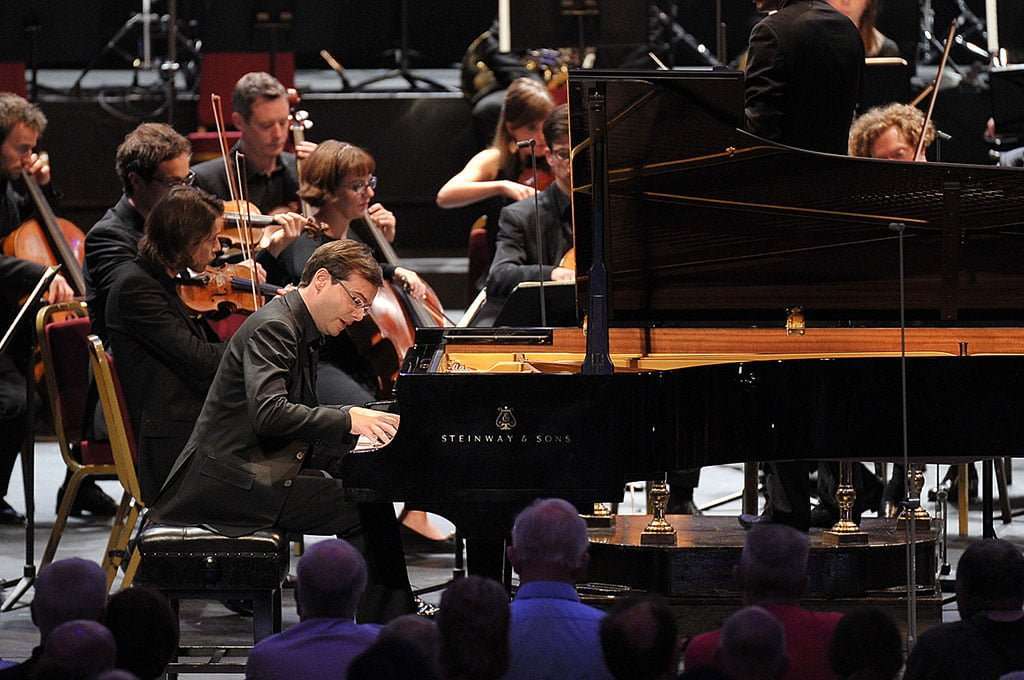 Most memorable of all was the Mozart, the so-called ‘Coronation’ Concerto, for which it seems Mozart didn’t write all of the left-hand part. There is an established left-hand part dating from the work’s first publication three years after Mozart’s death, but Francesco Piemontesi supplied his own left-hand writing where needed. And totally in keeping it was too. Piemontesi has a clear, focussed and unfussy manor at the keyboard, to which the Aurora Orchestra responded in kind.

Most intriguing was the first-movement cadenza (both that and for the finale were credited to Christian Zacharias). I’d noticed a celesta stage-left. Bizarre, I thought. But then, as Piemontesi started the cadenza, Collon walked over to the unexpected instrument and, for a few seconds, did a duet with the piano. It should be a music box, but that was thought an insufficient presence in the Royal Albert Hall.

After his lovely performance, Piemontesi gave us a Mendelssohn encore: ‘Duetto’ (Opus 38/6 in A flat) from Songs without Words – just as charming and unfussy as he’d been in the Concerto.