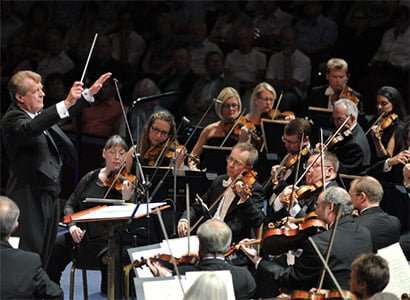 The term ‘light music’ is easily misused, and abused, inviting negative connotations of music that is often beautifully written and proportioned. This Prom reminded us that this is emphatically not the case, for here is music of skill, invention and emotional depth on the part of its six composers, performed with verve and obvious enjoyment by Barry Wordsworth and the BBC Concert Orchestra.

There was a Royal subtext, too, with the 60th-anniversary of the Coronation of Queen Elizabeth II to mark. More recent Royal events were also at the forefront of the mind in the welcome appearance of a comparative Elgar rarity, his Nursery Suite. Written in response to the birth of Princess Margaret in 1930, Elgar was tempted out of semi-retirement, encouraging him to recycle some of the tunes of his own youth and dress them for concert performance. Given the recent birth of Prince George, it was an ideal choice for this program, though Barry Wordsworth did highlight the music’s melancholic edge – the music of youth as seen through an older man’s eyes. ‘The Serious Doll’ had a plaintive flute solo, beautifully delivered by Ileana Ruhemann, while even the music of ‘The Merry Doll’ did not break in to an obvious smile. The charming ‘Aubade’ and ‘Dreaming’ movements were more difficult to resist, however, and the subtleties of Elgar’s orchestration, with a notably Gallic grace, were forthcoming. Only ‘The Waggon (Passes)’ [sic] felt like an opportunity missed, its magical crescendo and diminuendo taken rather quickly by Wordsworth, with the percussion drowning out the melody at the climax point. 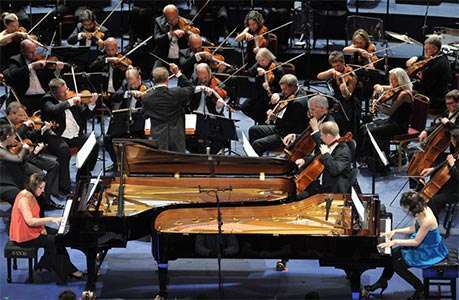 The music of Malcolm Arnold has suffered considerable neglect from the BBC Proms in recent times, so it was gratifying indeed to experience two of his characteristically economical scores. The Concerto for Two Pianos (three hands), written for Cyril Smith (by then, one-armed) and Phyllis Sellick, showed how this composer’s best music is a poignant mix of humour and darkness, often realised with inventive orchestration. Here was a slow movement whose main idea twinned the right-hand of the second pianist – Kathryn Stott – with tubular bells. The tricky unison passage came off well, and Stott’s phrasing bloomed appropriately. The volley of timpani and brash, percussive strokes of the pianos in the first movement displayed Arnold’s prowess as a descriptive film composer, while the slow movement reached depths of expression that brought Ravel’s G major Piano Concerto to mind. The finale was a riot, its rumba rhythms to the fore, Noriko Ogawa and Kathryn Stott playing as one.

Arnold’s English Dances (eight in all, Set II is Opus 33) also suffer unjust neglect, particularly when one considers they are wholly borne of the composer’s own invention rather than a reliance on folk-tunes. Some of them do bear resemblance to past English successes, but each has the noticeably bittersweet imprint of Arnold’s hand, and they were performed here with affection. The first featured very fine piccolo playing from Sophie Johnson, while the peals of brass in the second rang out with impressive clarity. The third, marked Mesto (sad), had charm but was ultimately heavy of heart, a mood secured by the mournful bassoon solo of Margaret Pollock.

The music of Granville Bantock is a theme of this year’s festival, and Pierrot of the Minute proved a charming and lucid concert opener. There are many nuances to this short but involving symphonic poem, its warmly Romantic mood occasionally marred by a sudden shiver of silvery strings or piquant woodwind. Wordsworth kept the textures light and the ending elusive.

Perhaps the best-known music, Walton’s coronation march Crown Imperial (1937, for George VI), opened the second half with commendable vigour, the brass of the BBC Concert Orchestra responding well to Wordsworth’s relatively fast tempo. The urgent approach secured a light-footed reading that occasionally got ahead of itself but which found Roderick Elms securing a pleasing balance between the organ (optional) and the orchestra.

Eric Coates’s suite The Three Elizabeths was more direct, adhering closely to the Royal theme in its portrayal of three very contrasting eras. Coates chose to interpret the age of the Tudors with busy music that felt like it was always on its way to somewhere without quite arriving. Wordsworth proved the ideal guide, as he did in the withdrawn second movement, which featured a beautifully controlled oboe solo from Adrian Wilson to honour ‘Elizabeth of Glamis’, the Scottish source-material nicely pointed. One suspects our own Queen Elizabeth II would have been pleased with her portrait, regal and tuneful with an expansive second theme of Elgarian nobility.

The most obviously ‘light’ music was saved until last, Gordon Langford’s Say it with Music, harnessing a bewildering number of theme- and show-tunes into a seven-minute medley that positively dripped with nostalgia but humour, too. The audience giggled when “The Archers” turned up (Arthur Wood’s ‘Barwick Green’, to put it more accurately) and there was charm aplenty, a slice of BBC Radio 2’s “Friday Night Is Music Night” brought to BBC Radio 3 on a Wednesday (this Prom was also broadcast live on Radio 2). It was a reminder that the best light music requires a very different skill on the part of the composer, and is deceptively difficult to bring off when performed. Barry Wordsworth and the BBC Concert Orchestra, well versed in this discipline, took to it naturally.