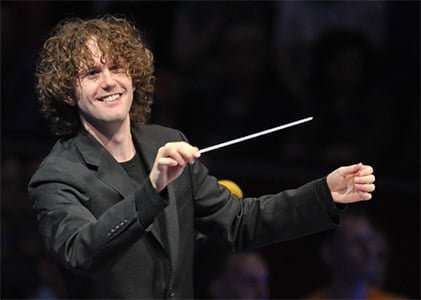 Nobody made music quite like Frank Zappa. He had the rare gift of making some incredibly complex and zany music that remained approachable, whether approached from a rock or classical direction. Yet his music fell out of favour with the Royal Albert Hall establishment in 1971, when the venue banned him and The Mothers of Invention on the grounds of obscenity. It was only on this night, 42 years later, that the venue welcomed back his music with open arms.

Zappa’s powers of invention impressed Pierre Boulez sufficiently for the two to collaborate in recordings of his work. Yet while Boulez admired his music from a classical viewpoint, The Aurora Orchestra found itself in an ideal position to interpret Zappa, standing squarely at the junction between classical and pop. Its members appreciate the workings of both forms, and indeed many have side projects outside of the orchestra. Together they have an extremely tight ensemble, essential for the rhythmic clarity Zappa’s music demands. 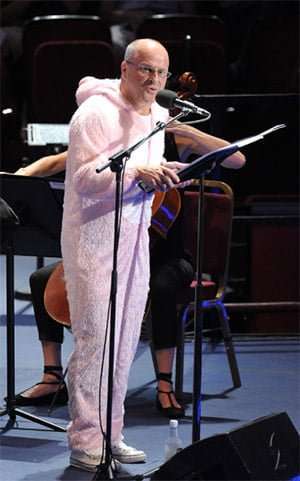 It helps, too, that in Nicholas Collon the musicians have a conductor who throws himself energetically into music that was not necessarily designed to be performed live, such as the working of Conlon Nancarrow, and his Studies written for player piano. The seventh of these was thought to be impossible for humans, but the 17 soloists assembled on the platform proved this is emphatically not the case in Yvar Mikhashoff’s arrangement – he blink-and-you’ll-miss-it counterpoint was secured with dazzling virtuosity and precision. Even when travelling at great velocity Nancarrow’s music is highly melodic, so if the mind cannot follow every nuance there is plenty to focus on. This arrangement for chamber ensemble is sympathetic and colourful, too.

Keith Potter’s programme note for Philip Glass’s Symphony No.10, written in 2011, raised a humorous but nonetheless important question about this Glass work being the one with the arpeggios? Inevitably it was right at times – but the composer opted for longer, more scalic phrases on this occasion. Glass does run the risk of repeating the same statement all too often – as he does in singular pieces of music – but here the essential element that made the work a qualified success was its much greater emphasis on rhythm. The sizeable percussion section, including a tam-tam standing about eight feet tall, dominated in the faster movements, working with braying brass to give the syncopations definition and a momentum that pushed towards driving rock music rather than classical. Those sections with a relative lack of melodic invention were enlivened through sheer rhythmic impetus, Collon helping with the faithful setting of the composer’s tempos, to which the players responded with commendable virtuosity and discipline. The slower movements, less inventive and more derivative, were nonetheless atmospheric, thanks to the orchestration that suggested the influence of Aaron Copland, not to mention the space afforded the music by Collon, his players and the Royal Albert Hall.

The star of the show, musically speaking at least, was emphatically Frank Zappa. ‘G-Spot Tornado’ from the album Jazz from Hell was a kaleidoscopic riot that sparkled with colour, powered by riffs aplenty and taut percussion. Collon has an affinity with Zappa’s music, and it carried over into an exuberant performance of The Adventures of Greggery Peccary, a tale whose telling is best left to the performers! The script, such as there is, was brilliantly interpreted by the grunts, wails and gnashing of teeth given out by Mitch Benn and baritone Christopher Purves, both fully proving their worth as respectively narrator and singer. Purves went the extra mile, dressed in a pink pig suit, and Zappa would surely have approved of the wiggle he gave towards the Arena on his arrival.

What followed was organised chaos, music that moved with an often bewildering speed of thought, with Zappa’s trademark zany humour never far from the surface. The Aurora percussionists were superb, obtaining remarkable definition in the cavernous acoustic, no matter how complex their patterns. The reduced orchestra, too, was rhythmically tight unified. That we were left with one of his catchy hooks: “who is making those new brown clouds”, as sung by Purves, says much for Zappa’s power of invention and the conviction of delivery, with Collon’s incisive conducting a significant element in the quality of the performance. Only the typewriters of the second scene were compromised, they were visually in keeping with the plot but struggled to be heard.

This was a very small blot, though, in a concert reaffirming Frank Zappa as a composer whose invention, humour and originality knew no bounds, frequently stepping over the line. Having been banned while he was alive (he died in 1993 in his early ‘fifties), it was only right that the Royal Albert Hall should now welcome Frank Zappa back with open arms.