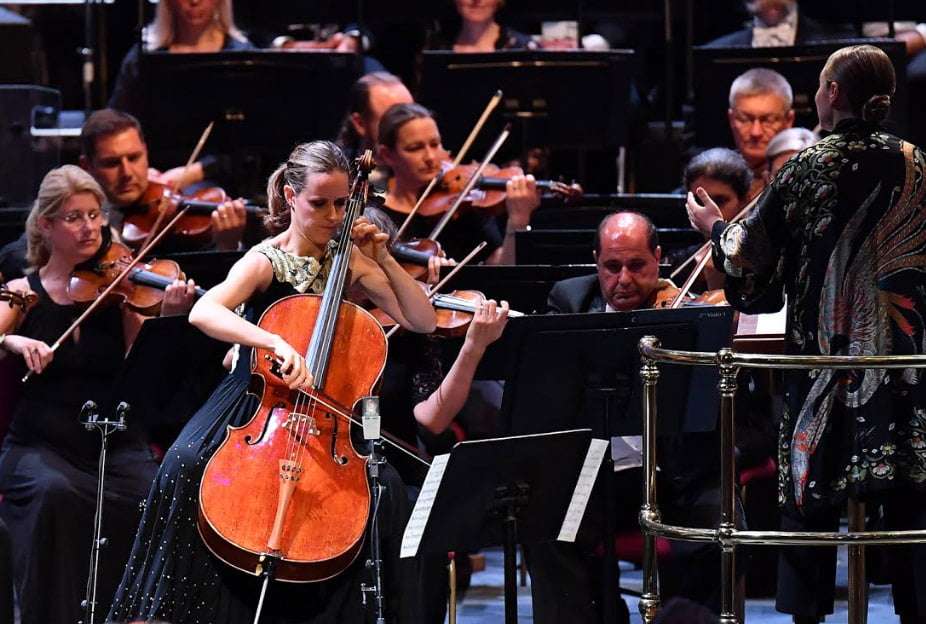 Reflecting that “music is a place where worst enemies can sit side by side and feel the same thing”, Dalia Stasevska, the new young Ukrainian-born Finnish principal guest conductor of the BBC Symphony Orchestra, hasn’t been conducting long – less than five years professionally. But, benefitting from studies with a clutch of Finland’s best – Mikko Franck, Hannu Lintu, Susanna Mälkki (whom she particularly admires), Sakari Oramo and Leif Segerstam – she clearly has a passion for the occupation. Her way with slower, quieter music is at times near static in motion, just the slightest of gestures, a barely perceptible leaning into the beat. In energised material, arms in flamboyant synchrony, she takes off, every sinew and facial expression straining to point entries, her body language single-mindedly with each player. Here and there, I wondered if she was not perhaps a shade too busy, too interventionist, yet she found time to let space and air frame her intentions. Consistently, with estimable results. By the end, laurels won, the packed audience hungry for more, she had the orchestra right behind her, flying triumphant. This was an engaging Proms debut, expectant and adrenalin-charged. Radiant in her kimono-style long jacket, a musician communicating music with a pedigree band, she must have felt on top of the World.

Born a century ago, Mieczysław Weinberg (1919-96) – a Polish Jew who, fleeing the German occupation of Warsaw, embraced the Soviet Union in 1939, journeying from Belorussia to Uzbekistan to finally Moscow – dominated the first half. A close friend and musical partner of Shostakovich, falling foul of the authorities during and following the 1948 cultural purges (later official recognition notwithstanding, including a State Prize of the USSR in 1990, he never joined the Communist Party), he was, as David Fanning reminded in the programme book, a man “given over to memorialising the victims of Nazi atrocities” who even in his abstract works – twenty-six Symphonies and seventeen String Quartets among them – searched “for a consoling voice in a brutal century”. Originating as a Concertino for cello and strings, written in 1948 and then put into cold storage until after Stalin’s death, the 1956 Cello Concerto was premiered by Rostropovich in January 1957. 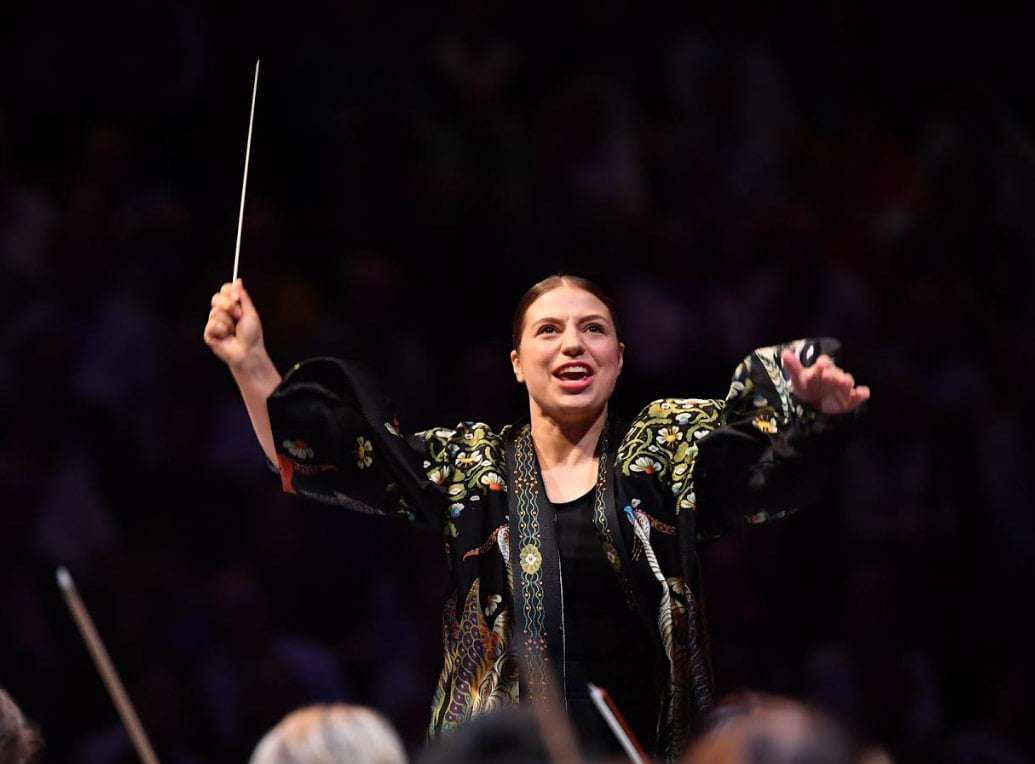 Melancholically lyrical and compelling, starting and ending with a whisper, it’s a four-movement construction rich in ideas, incident and cyclic relationships, discerningly crafted and beautifully scored. The music broods, regrets and sings – anything from old Russian C-minor gravitas to klezmer to bard-like cadenza to Caucasian spirit (the third-movement Allegro shares something of Khachaturian’s DNA – specifically the dance-Finale of his pre-Patriotic War Violin Concerto). A ravishing, aristocratic player always seeking out new repertory with a difference – she should look at some of the cello music of Adrian Williams or Cheryl Frances-Hoad – Sol Gabetta made a cultured case for its revival, commanding the platform with elegance and finesse (as indeed she did in a performance with Franck in Paris last December). Steeped in the language and style, Stasevska collaborated intensely, finding deep emotional veins. Her rhythmic bite in the third movement, free of bombast, was just one of many niceties caught by the orchestra, enhanced by the acoustic. Strange, so late in the day, that this was only the work’s London premiere. As much as anything by Shostakovich or Prokofiev, it should be a standard.

Gabetta’s encore, Pablo Casals’s arrangement of the Catalan folksong ‘El cant dels ocells’ (Song of the Birds) in a version with three other cellos, cast a valedictory spell, a classic example of a player murmuring out of silence into silence, every note placed like softly shone facets of cut glass, every phrased long-breathed, the tone and vibrato expressively subtle.

Stasevska claims that, while “not afraid to add something of herself”, she prefers a purely objective approach in preparing her performances, letting the music tell its own narrative rather than imposing one or searching (inanely, spuriously) for a ‘meaning’ – something Radio 3’s current crop of announcers and Z-listers would do well to heed. Her Sibelius – bringing midnight light to a northern landscape, waiting for the sun to rise – struck the right note, the horns of the outer movements sending a shiver, the strings throbbed and sonorous. The paragraphing of the central ‘Ballade’ – plaintive, detached high oboe, eloquent cor anglais (Jane Marshall) – could scarcely have been improved. 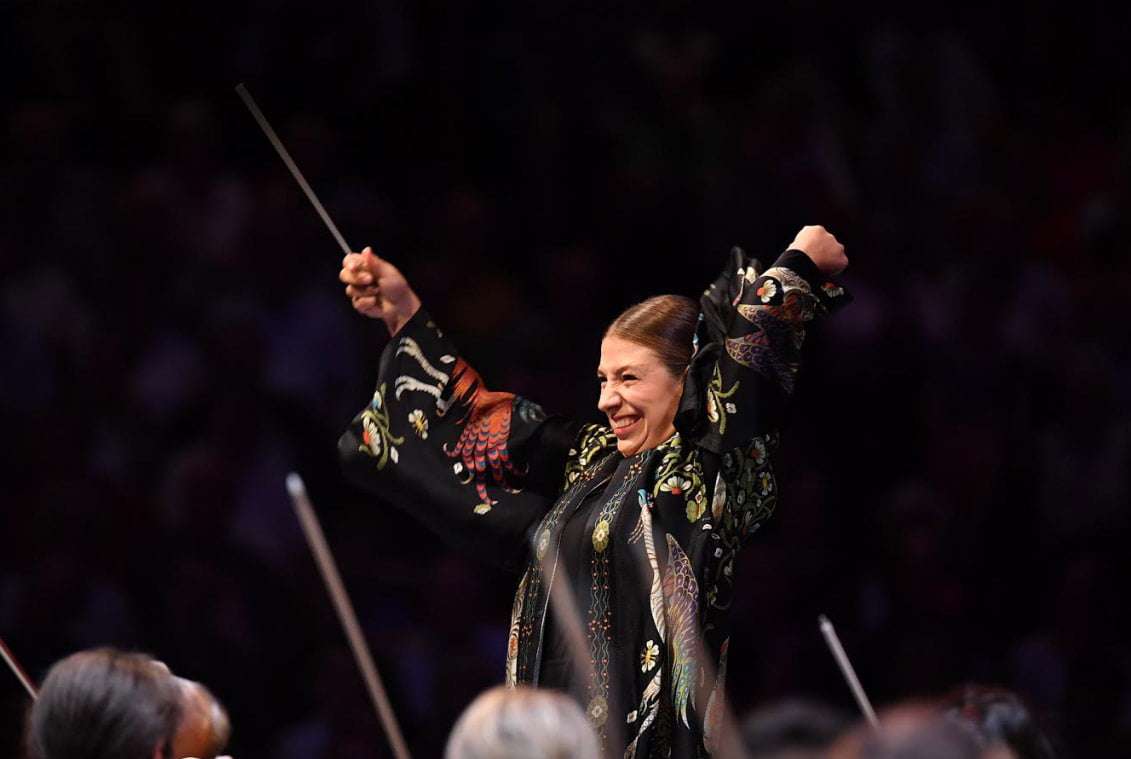 Undaunted by the legend and peaks of the ‘Pathétique’, she went for directness in the first movement, grace in the 5/4 second (the Trio section appealingly un-laboured), speed and hellfire in the hard-sticked third – orchestrally challenged in the storm she whipped up (at minim 84+ more two-in-a-bar than four: the score prescribes crotchet=152) – and bleakness in the Finale, the faltering life of the concluding bars expiring tersely, here one second, gone the next. She held the work together, and the BBC Symphony repaid her meticulous attention to detail, voicing and balance. Nothing was taken for granted. Sometimes I’d have liked more voltage (the climax of the first movement development, for example, arguably a little too prepared and placed). But the second movement appeased, and the Finale gradually haunted, Tchaikovsky’s theatre left to speak for itself, unadorned, unsentimentally. A hushed tam-tam sounded the unknown. The long-held silence at the end, the blackness of B-minor fading within, around, above us, was appropriate and needed. A time to think.

Unacceptable, however, was the audience’s response to the climaxing thunder of the third movement. Not a ripple of applause but prolonged, ecstatic, clapping, insensitively annihilating the tension and line so deliberately generated up to this point. It happens often, of course – the nature of the beast – but in sixty years of concert-going I can’t readily recall experiencing an intrusion quite so spiritually damaging or physically offensive. Starting all over again, as it were, Stasevska recovered, drew in the threads, and conquered. Hats off.