“Two great queens – Cleopatra and Dido – are the inspiration for this concert by Austrian soprano Anna Prohaska and period ensemble Il Giardino Armonico. Operatic arias by Handel and Cavalli are framed by instrumental works from the period.” [BBC Proms website] 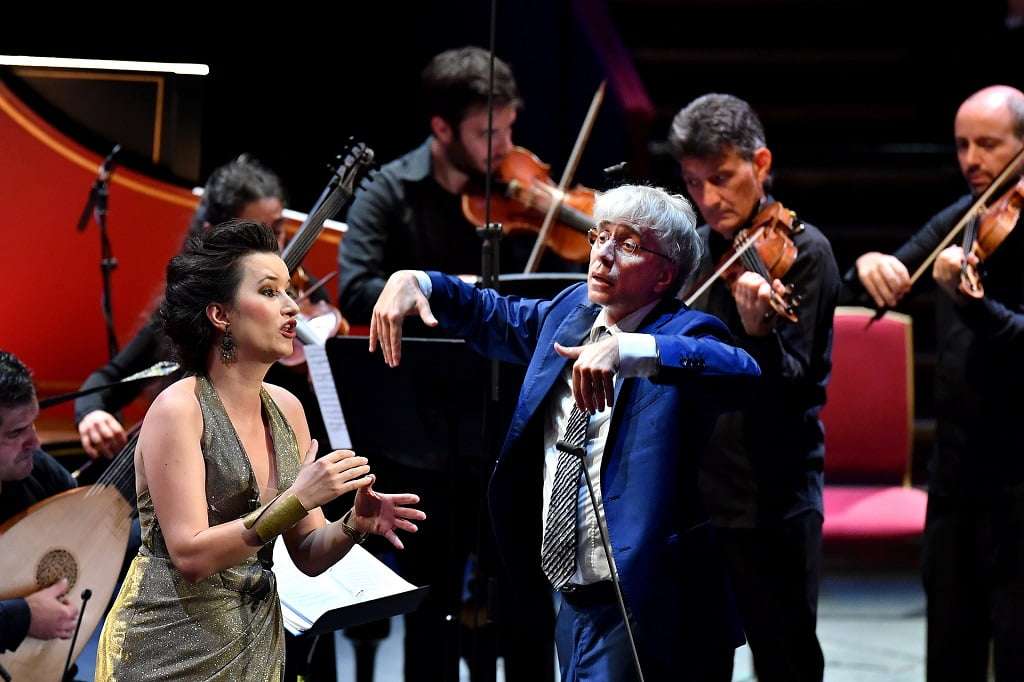 Having collaborated on a recording profiling two of the most prominent, if semi-mythological, queens of the ancient world, Anna Prohaska and Il Giardino Armonico took a similar programme of extracts from Baroque operas to the Proms.

If Shakespeare has one of his characters praise Cleopatra’s “infinite variety”, the same could be said about Dido, Queen of Carthage, as she was portrayed in music dramas of the seventeenth- and eighteenth-centuries. But here it was the artfully more sober character of Purcell’s re-telling (c.1689) of the story from Virgil’s Aeneid which sandwiched this vivid recital. Prohaska made a dramatic entry during the straightforward but portentous account of the Overture under Giovanni’s Antonini’s direction, and launched into a disarmingly direct performance of Dido’s earlier lament to her maidservant ‘Ah! Belinda, I am press’d’. With purity of voice, expression came about more through her strongly enunciated syllables, with an Italianate rolled ‘r’ in “torment”. Her declamation of the Queen’s final and most-famous plaint, ‘When I am laid in earth’, was rightly less rhetorical, but both intimate and hauntingly projected into the Royal Albert Hall to impressively moving effect as the final item of the programme. She returned to the opera for a coquettish rendition of Belinda’s brief ‘Fear no danger to ensue’ as an encore, with Antonini taking the second (unspecified) soprano part on the flute. 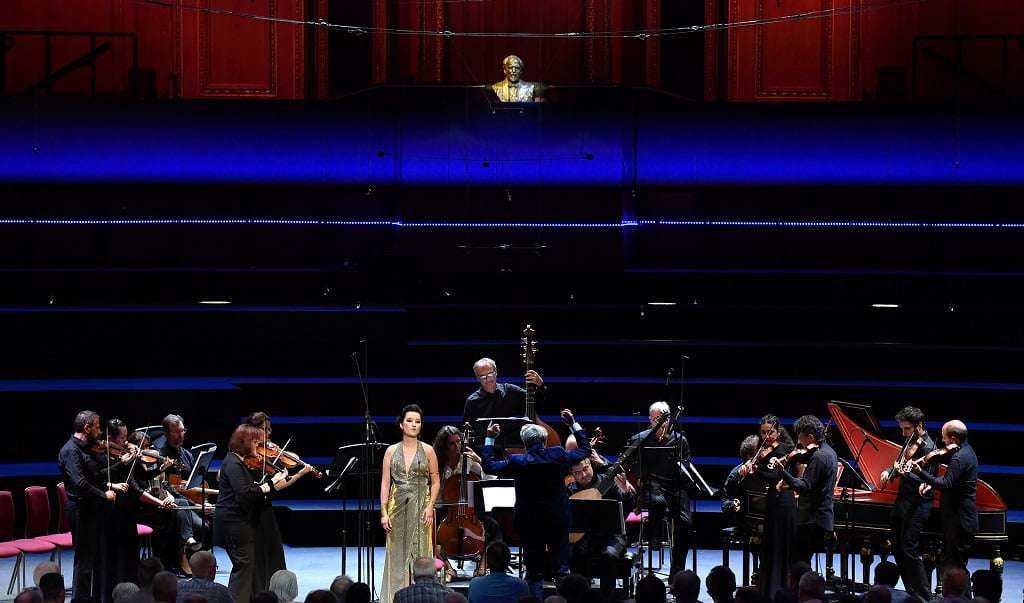 Christoph Graupner’s opera on Dido (1707) was written for the then important theatre in Hamburg, and like other stage-works which originated there (such as Handel’s first opera Almira, and some of Telemann’s) its libretto is bilingual. Prohaska’s gentle singing, calmly rippling accompaniment from the ensemble and Antonini’s flute-playing summed up the bucolic charm of the chosen arioso, although in that context Prohaska’s assertive enunciation became more a mannerism. But in the two subsequent extracts in Italian, her effusive style was better suited, whether plangent, or edgy and restless, with appropriate violence brought out by the strings’ col legno articulations.

Later on, the scene was set for Cavalli’s Venetian opera on the subject (1641) with a Sonata for strings from Dario Castello’s second collection (1629) written in the same city. The vigorous playing in the latter highlighted its surprising twists and turns, but the musicians then moderated that for the Cavalli setting to allow Prohaska to express its emotions sturdily. The ‘Curtain Tune’ from Matthew Locke’s setting of Thomas Shadwell’s version of The Tempest as a semi-opera was included in a cleanly-focussed reading on the basis that, in the play, Alonso’s daughter Claribel is compared with Dido. 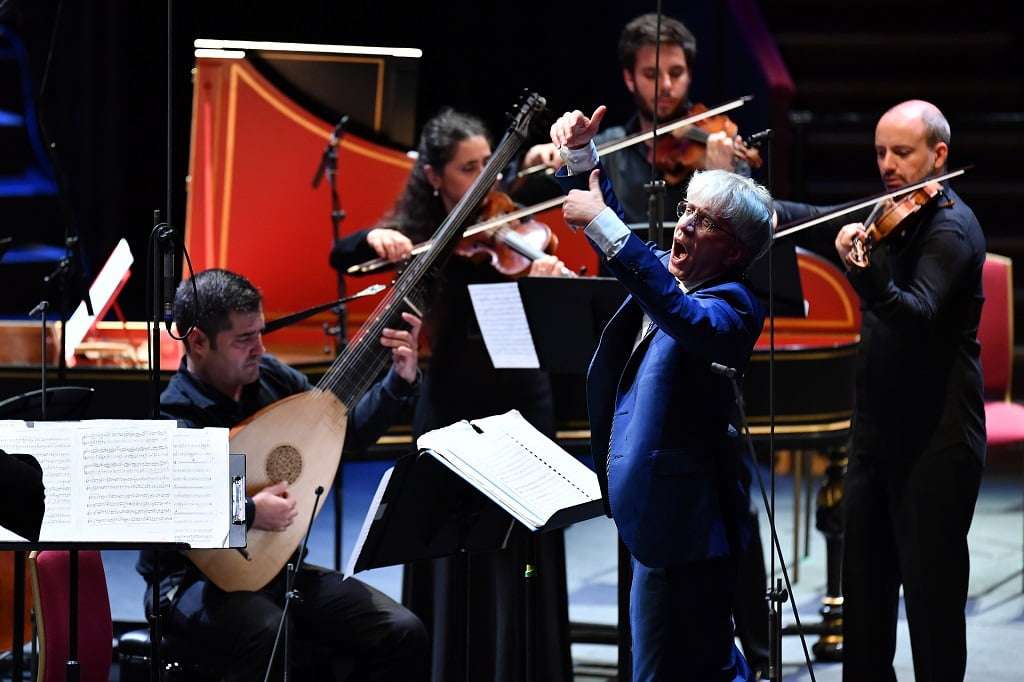 Cleopatra was taken as the subject for a variety of operas, the earliest here being Antonio Sartorio’s Julius Caesar in Egypt (1676). The two extracts offered prompted exuberant rhythmical interpretation on account of their dance meters (with strumming on the theorbo and foot-tapping, and another fluttering solo on the flute from Antonini) with fervent, forceful singing from Prohaska to match. Handel’s treatment of the same episode, but to a different libretto (1724) is probably the most-famous presentation of Cleopatra in Baroque opera. Prohaska showed the character at her most desperately yearning and pitiable with the finely drawn lines of lament as Handel demonstrates his genius for profound simplicity.

At the other extreme, Prohaska executed the virtuosic levity of the coloratura called for in Hasse’s extract (1725) in which the role was, oddly, originally written for Farinelli. Her singing was crisp and precise but without sacrificing fiery passion. Handel’s Concerto grosso Opus 6/8 was doubtless included because its Adagio is based upon another of Cleopatra’s arias from his opera. The phrases of the Concerto were well turned by Il Giardino Armonico, questioning and quizzical in the opening ‘Allemande’ as the melodies frequently elide clear harmonic resolution, lilting in Corellian fashion for the ‘Siciliana’, and impetuous in the concluding Allegro. In all, the programme was an imaginative thematic approach to the colour of Baroque music-drama which surely enthralled enthusiasts and newcomers.