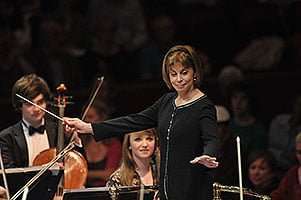 Over the road from the Royal Albert Hall, alongside the Albert Memorial, huge marquees are filled with national displays from such as Russia and South Africa. The RAH itself became the biggest Marquee of all for this afternoon Prom, celebrating Northern Irish musicians (young and not-so young). This was a chance for the Ulster Youth Orchestra to mingle with its professional counterparts from the Ulster Orchestra on one of the biggest stages in classical music.

The Youth Orchestra began the programme with a very assured and colourful performance of Chabrier’s tourist’s view of Spain, España. It zipped along, like a train speeding through a picture-postcard sun-drenched landscape. The young musicians were responsive to JoAnn Falletta’s clear direction; only the staging, designed to accommodate the players of the Ulster Orchestra later in the concert, left some sections seeming a little far removed from the centre of the action. 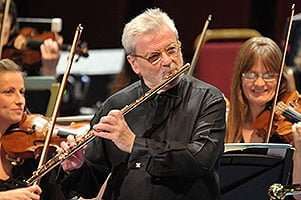 Next, the man who must be the most famous classical musician to have come out of Northern Ireland: James Galway. His turn in Mozart’s D major Flute Concerto saw the Ulster Orchestra take the place of its younger colleagues, albeit in much-reduced numbers appropriate to Mozart. Falletta – recently appointed as Principal Conductor to the orchestra – directed an effective, if slightly stiff accompaniment, while Galway’s effortless projection and rounded tone carried across the vast auditorium. Curiously, though, his pitching was sharper than the orchestra’s throughout, which jarred particularly in the Andante. An extra followed: a romp through a Galway signature piece, the ‘Badinerie’ from J. S. Bach’s B minor Orchestral Suite. 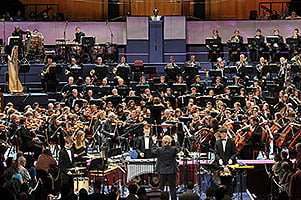 Elaine Agnew’s inspiration for Dark Hedges (2012) is a remarkable avenue of intertwining trees in County Antrim. She asks for a platform of percussion, here placed in the Arena, along with a wandering flautist, Sir James. The two orchestras combined to form an impressive ensemble, giving great weight to the brassy melodic cells. The crowded group of trees isn’t an obvious image at first, but after the elemental clamour of the opening moments, Agnew’s diverse percussion group gave a vivid and surprisingly amusing impression of the magic that must historically have been associated with such a remarkable natural landmark.

Both ensembles remained together for the first of Stravinsky’s suites from The Firebird. This 1911 collection (retaining the large-orchestra scoring of the complete 1910 work) doesn’t have the seamless flow of the later suites, being literally a selection from the full ballet, and notable for concluding with the ‘Infernal Dance’. Both groups came together well: the Ulster Youth Orchestra’s members held their own brilliantly. JoAnn Falletta steered the combined groups through an exciting performance to a fevered finale, but she might have allowed more flexibility for the musicians to bask in the luxuriant moments. Nevertheless, it was a strong Proms debut for the Ulster Orchestra’s new Chief and a heartening showcase for the strength of music-making in Northern Ireland.