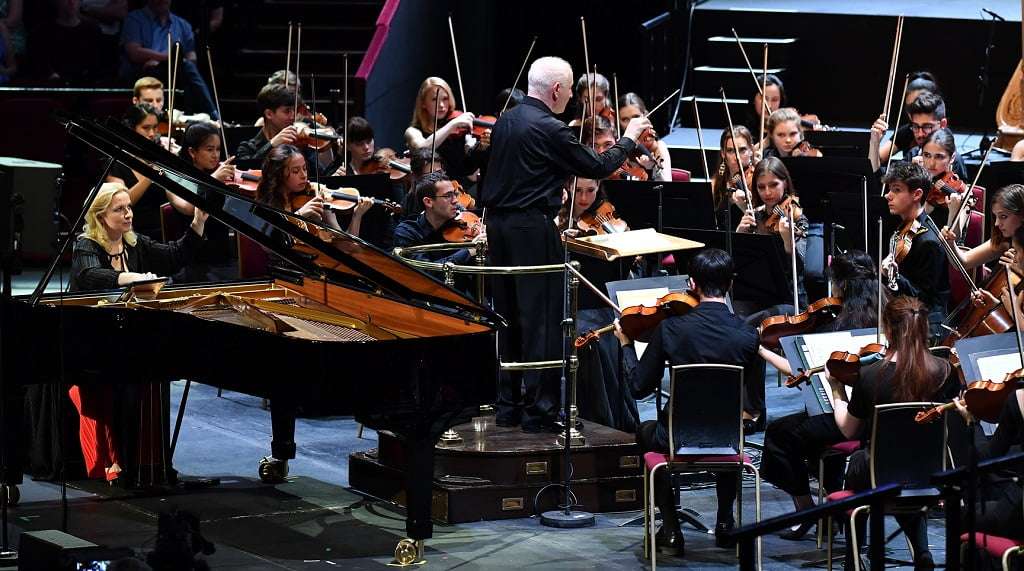 Was it the stiflingly hot night? This was not the most thrilling National Youth Orchestra Prom in living memory although it is always inspiring to see 160-plus young musicians at full stretch. Purely incidental factors irked. The style of presentation, with three members of the orchestra regularly stepping out to address listeners, made some of us feel we were eavesdropping on a BBC4 recording session rather attending a concert, and I found the soloist’s use of a manually operated electronic tablet incompatible with the eccentric physical drama of a Piano Concerto for the left-hand. And there was the programme itself – fascinating on paper but problematic. Placing the Ligeti immediately after the interval was asking for trouble given the restless nature of an almost capacity Proms audience these days.

On the podium was Sir George Benjamin who has been seen in this role since as long ago as 1986, initially leading performances of his own music, ranging more widely since 2000. His most surprising recent performance credit was as speaker, an aptly insinuating, youthful-sounding Old Nick for Stravinsky’s Soldier’s Tale, one of Oliver Knussen’s final recording projects. That Linn disc was meant to have drawn additional cast members from the surviving icons of Mancunian modernism. Sadly Peter Maxwell Davies was too ill to take part and it now stands as a memorial of a different kind. Benjamin’s own piece for this Prom contains music originally composed as a freestanding birthday tribute entitled Olicantus while Tamara Stefanovich’s best playing was reserved for her pre-planned encore, Knussen’s Prayer Bell Sketch, itself composed in memory of Toru Takemitsu. Initially vociferous applause having died quite quickly after her lacklustre Ravel, one wondered whether she would make it back onto the platform in time to pay her respects. 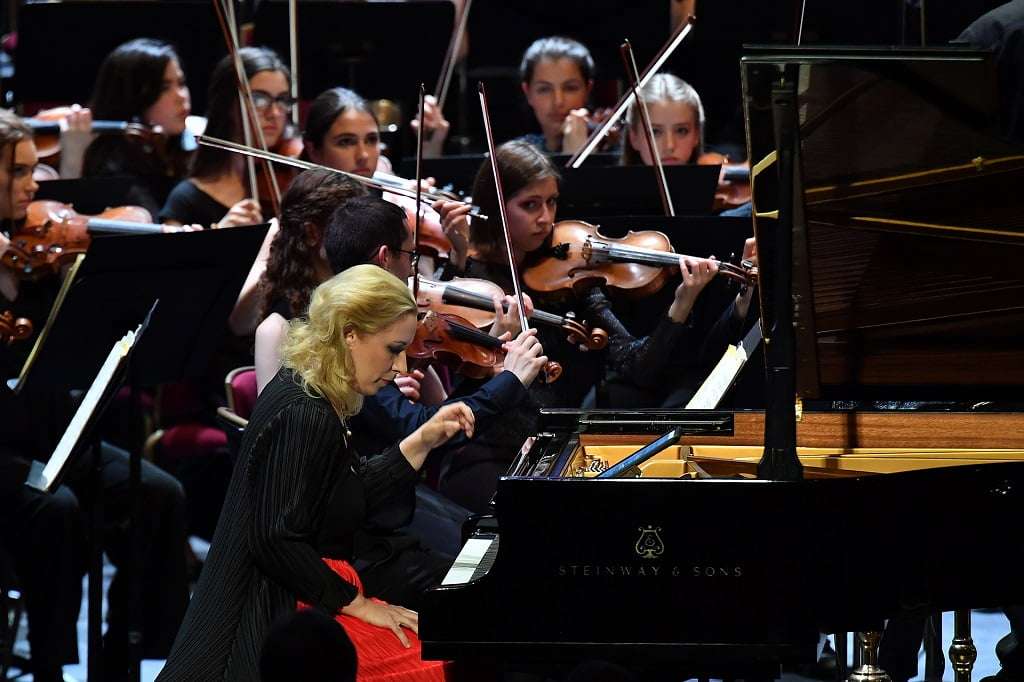 While Sir George can seem among the more purist of surviving ‘modernists’ his penchant for the critically unfashionable Rimsky-Korsakov arrangement of Night on the Bare Mountain tells a different story. Since the 1970s, it has often been heard in one or other echt Mussorgsky version, shorn of the editorial improvements imposed by other hands, yet the conductor, with his particular sense of fun and nostalgia, clearly relished its ultra-professional flair and polish. The extra-large NYO responded with enthusiasm and some wonderfully shaped solos even if cumulative excitement was less in evidence. Throughout the night the music tended to impress as a parade of precisely coloured sections rather than driving inexorably towards a goal.

This scarcely mattered in Benjamin’s own Dance Figures, chiselled miniatures that cover a wide range of moods and timbres, every detail justifying its place. The Ravel was less comfortable however, its moods oddly muted. Not that this was the only performance of recent months in which the jazz aspect (even of its central Allegro) remained confined to a solo or two. Benjamin failed to get beyond cautious daintiness in passages where Pierre Boulez allowed the LSO to swing – I checked Krystian Zimerman’s recording on my return! That said, a looser feel was perhaps not an option: co-ordination with the wayward, sometimes slipshod Stefanovich was surprisingly fraught. Plausibly poetic and individual in more restrained passages, she got behind in the transition to the central Allegro and nervously rushed her return to the reprise of the Lento opening. Had the heat affected her? The Knussen suggested otherwise. Following two renditions (Aldeburgh, Birmingham) featuring these forces the results should have been better. 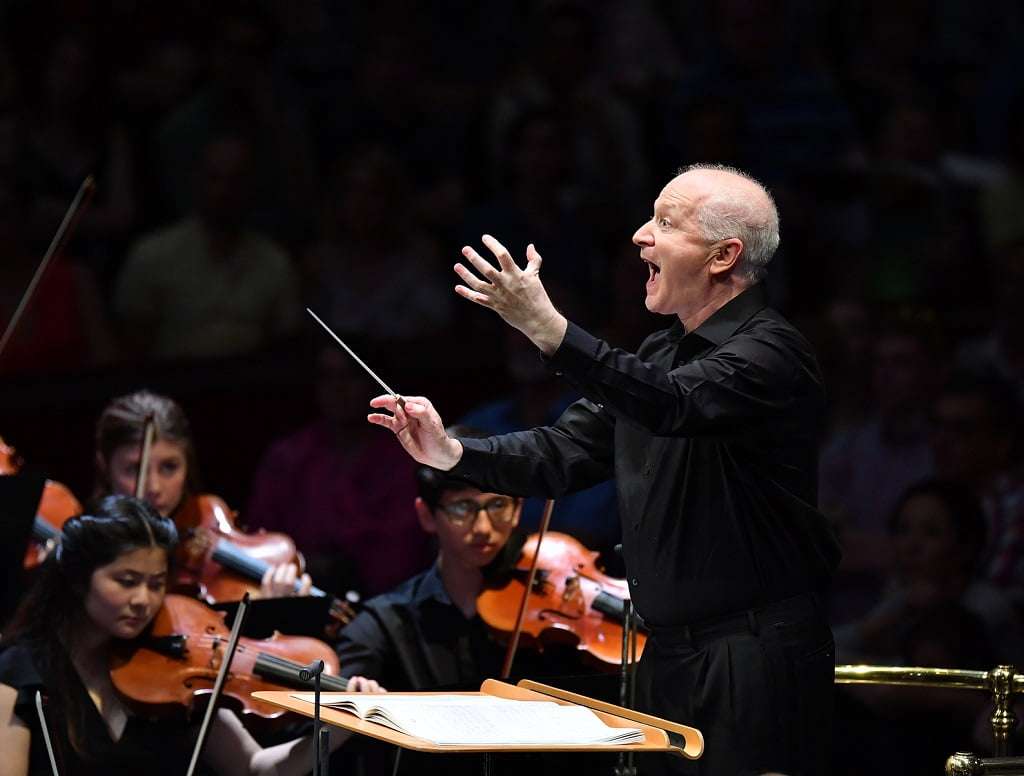 When Ligeti’s Lontano was last played at the Proms in 2015 by François-Xavier Roth and the SWR Symphony Orchestra Baden-Baden and Freiburg, the ensemble which had premiered the piece in 1967, the concert was an emotional occasion, the band’s last prior to a controversial merger with the Stuttgart Radio Symphony Orchestra. Tonight the atmosphere was brighter and if the disgusting cannonade of coughing discouraged the players they didn’t let it show. This was a definite high point. Curiously the trio of announcers failed to mention the Stanley Kubrick film in which part of Lontano appears: The Shining. No doubt for some listeners Ligeti’s slowly evolving sound-clouds are not music but they can still engage the attention and mesmerise like few products of their kind. Unfortunately this was, at least in part, the kind of crowd for which the subterranean growl of the tuba represents a cue for drunken guffawing.

In 1971 Boulez led a fondly remembered performance of Debussy’s La mer with a previous generation of the National Youth Orchestra and it makes an ideal showpiece for young players as well as allowing a conductor to demonstrate control of colour and texture. This distinctly Mediterranean rendering gave the impression of being much more thoroughly prepared than that of the Ravel. Towards the end, the conductor chose not to restore the fanfares present in Debussy’s 1905 score from bar 237 and offered us something more rousing than neatness and finesse in the final climax, ditching Apollonian caution.