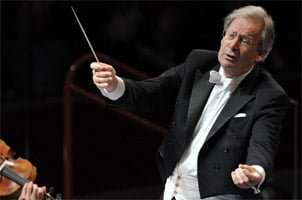 It is barely a year since an earlier concert performance of Pelléas et Mélisande (given at the Barbican Centre by Louis Langrée and forces from the Théâtre des Champs-Elysées) demonstrated that the gentle hokum of Debussy’s only full-length opera is enhanced, not diminished, when the settings are in the mind’s eye. As with a good radio play, you get a better class of production – of this opera, at least – when there’s no director intervening to plaster a concept on to the eyeballs.

If that memorable evening (with Simon Keenlyside and Natalie Dessay in the title roles) was a highlight of 2011, Sir John Eliot Gardiner’s BBC Proms performance, also based on a recent Paris production, this time from the Opéra Comique, came close to matching it in 2012. It fell short by comparison only in small ways, chief among them Sir John Eliot’s reluctance to curb orchestral swells that would normally be tamed by the covering of an orchestra pit. These caused Karen Vourc’h to become inaudible whenever the orchestra surged, or when she faced away from any section of the audience. The cerebral nature of the experience was also interrupted by self-conscious comings-and-goings as the singers wafted their way on and off the platform between scenes, while the odd inclusion on the platform of a (non-matching) library armchair and chaise-longue left one wondering what else the previous evening’s My Fair Lady team might have left behind.

The century-old instruments (plus some replicas, one assumes) of Gardiner’s Orchestre Révolutionnaire et Romantique had an impact that was spatially thrilling, with none of the homogeneity that sometimes marks their modern equivalents in this music. The warm gut-string sound, unbuttoned brass and rasping horns lent immediacy to the Interludes that one rarely hears, and the conductor moulded his overall reading with assiduous attention to the unfolding of Debussy’s elusive dreamscape. The burnished sound world of the orchestra was complemented by the casting, with solo voices young and old adding a wide-ranging vocal palette to that of the ORR. 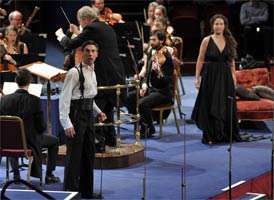 Last year’s revelation had been the Golaud of Laurent Naouri (Dessay’s husband) and here he was again to explore the many facets of Debussy’s richest role. As before, Naouri displayed the most detailed and subtle understanding of the character. His slow-burning emotions erupted with frightening energy mid-way through the opera, first through his character’s obsessive use of the child Yniold (a not-particularly-boyish Dima Bawab) to spy on his wife, and later, in Act Four, in a barely-controlled outpouring of jealousy. Yet despite these hair-raising frailties, Naouri’s view of Golaud as a fundamentally good man allowed him to move the audience deeply with the regret of his valedictory lament “Je t’ai fait tant de mal, Mélisande.” 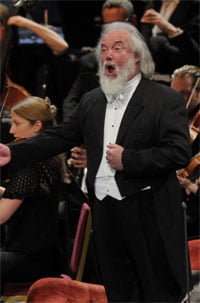 As Pelléas, the young baritone Phillip Addis placed the extraordinary range of his voice at the service of a role that is occasionally sung by a tenor. While not a true Baryton-Martin – his low notes are too full for that – Addis’s vocal centre of gravity is high enough to give him a thrillingly focused upper register that is ideal for Debussy’s scoring. We must hear more from him. He and Vourc’h made a plausibly youthful and naïve couple, although there were moments when the soprano went against Debussy’s wish for a “déclamation lyrique” and coloured her interpretation unduly (her delivery of “Laissez-moi; je préfère marcher seule” at the end of Act Two bordered on the knowing). However, her radiant, bell-like rendition of Mélisande’s hair-combing scene, “Mes longs cheveux descendent”, showed Vourc’h in a better light.

The telling cameo character of Geneviève was taken superbly by Elodie Méchain adding plangent warmth to her near-contralto sound, while in Arkel, the kingly grandfather, John Tomlinson has unearthed a role that fits the post-Wagnerian chafe of his well-used voice like a glove. No audibility issues here! His regal, compassionate interpretation deepened and intensified the overwhelming nature of the opera’s closing pages.

Moments such as Gardiner’s dream-like reading of Mélisande’s deathbed scene and the barely-contained eroticism that he teased from Pelléas’s declaration of love in Act Four (how ecstatically Addis’s youthful voice soared at “Je ne crois pas qu’il y ait sur terre une femme plus belle!”) ensured that this performance was not only memorable, it was revelatory. The first of several celebrations of Debussy’s music at this year’s Proms, it made an outstanding conclusion to a richly varied opening weekend.