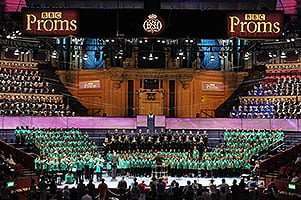 If I’d thought that the NYO’s 165 players the previous evening had filled the Royal Albert Hall my illusions were shattered at this afternoon prom with 550 choral members – the Bach Choir (commissioner of the main work) to the left of the organ and the National Youth Choir to the right, with the BBC Singers on the stage surrounded by a sea of green shirts worn by the hundreds of schoolchildren, representing various London boroughs. There was also the Great Baddow High School Signing Choir, joined by Paul Whittaker who “interpreted” both works in British Sign Language.

A wise decision had been made to reverse the order of the programme, so that Ben Parry’s short Flame prefaced Bob Chilcott’s long cycle based on Charles Bennett’s poems, The Angry Planet. Having said that, the three adult choirs could easily have repeated Flame at the end of the concert, so impressive was it in its Buddhist ideal of a single candle becoming more powerful in spreading light by the number of people that see it, as encapsulated in Garth Bardsley’s short stanzas. From low Pärtian sonorities to start, Parry’s setting rises slowly in pitch in 12-part harmony ending with wave upon wave of reiteration of the final line “so to light the world”, bathing the Royal Albert Hall in a sonic glow. 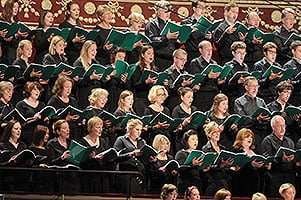 Bob Chilcott’s new work took a few years to compose and sets 13 Bennett poems written for him, all with an ecological slant, even if the poet himself admits that “at the end of the creative process, I realise I have written a piece which is not so much concerned with the anger of the planet as with our custody of its wonders.” The Angry Planet traces an evening from 6 p.m. to 6 a.m., each of the four movements moving three hours on. The third has the additional fourth poem to start, Midnight, which is the only one to require the solo soprano, the radiant Laurie Ashworth. Otherwise the pattern is loosely the same, the opening poem of each movement mostly for the large choirs, the second for the BBC Singers and the third for the massed children’s choirs. Only in the very final poem, Perhaps, marking 6 a.m. do all voices sing together, the children ultimately imitating sparrows and indicating that humanity might one day safeguard its very existence by saving the planet. 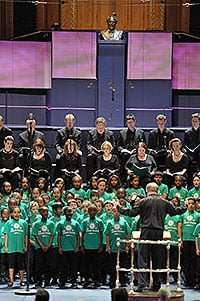 If Midnight was the nightmarish pivotal panel, two poems on – 3 a.m. – was the anguished cry from the heart for humanity’s extinction of a whole host of species, and the final poem of that third movement – Sorry Too Late – a typically glib human response to raping the world’s resources and damaging its habitats.

Chilcott has fashioned a successful melding of his various choirs’ voices in a heartfelt work that certainly chimes with my view of the world. But in creating such a vast panoply of sound, requiring so many performers, I wonder if it may be a victim of its own conception – I’m not sure how even its commissioners could keep it in their regular repertoire, and I fear this occasional work might too suffer all-too-early extinction.

As enthusiastic as ever, David Hill conducted performances of great commitment, even amidst the barrage of what sounded like new life bewailing humanity’s legacy to its children, as various babies cried almost throughout.