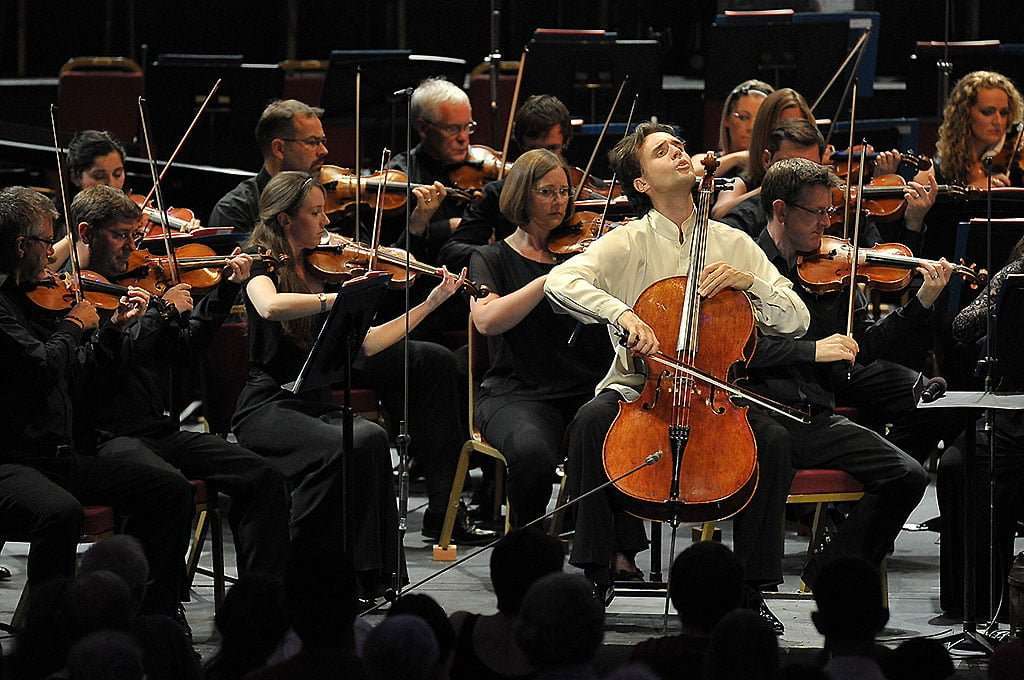 I didn’t know what to expect on this Sunday afternoon – not having particularly registered Eric Whitacre before (and being elsewhere on his previous Proms appearance, No.62 – late night – 2012), save for knowing that he had a choral reputation. But I came away from this, the first of two Proms given this season by the Royal Philharmonic Orchestra, discovering a composer who likes to encompass big natural phenomena in music that beguiles the ear in apparent simplicity (but by his own admission are difficult to conduct) and gives time for his audiences to dwell on big questions.

But first of all an explosion that was originally conceived as an encore for the Chicago Youth Symphony, but here acted just as effectively as a fast-paced, energetic opener, giving the RPO a four-minute workout in typical American-band fashion in Whitacre’s college-mate Jonathan Newman’s Blow it Up, Start Again. The contrast with Whitacre’s depiction of The River Cam, for cello and strings, was marked as this is a Vaughan Williams-esque subtle sound-picture of the idyllic walks along Cambridge’s river that Whitacre had with his young son to school and back. Leonard Elschenbroich (in a white flowing shirt, rather than Cambridge light blue) was the master of the cello’s long lines in music that remains largely unruffled.

Looking up, and back in time, and clearing the stage of the orchestra save for piano and percussion, Whitacre conducted the BBC Symphony Chorus and BBC Singers in his first major hit, Cloudburst. So now I see why Whitacre has caused such a sensation! Setting verses from Mexican poet Octavio Paz’s El cántaro roto (The broken water-jar), Whitacre conveys the effect of witnessing a desert storm not only by the constant overlapping of vocal lines but the clicking of fingers which, when he indicates the audience to join in, really does sound like big fat raindrops hitting sand. Top marks too for the quick-witted audience member near the stage who put up their umbrella! A thundersheet in the percussion department helped to create the effect. Composed when Whitacre was 21, Cloudburst is undoubtedly a masterpiece, wearing well nearly 25 years later. 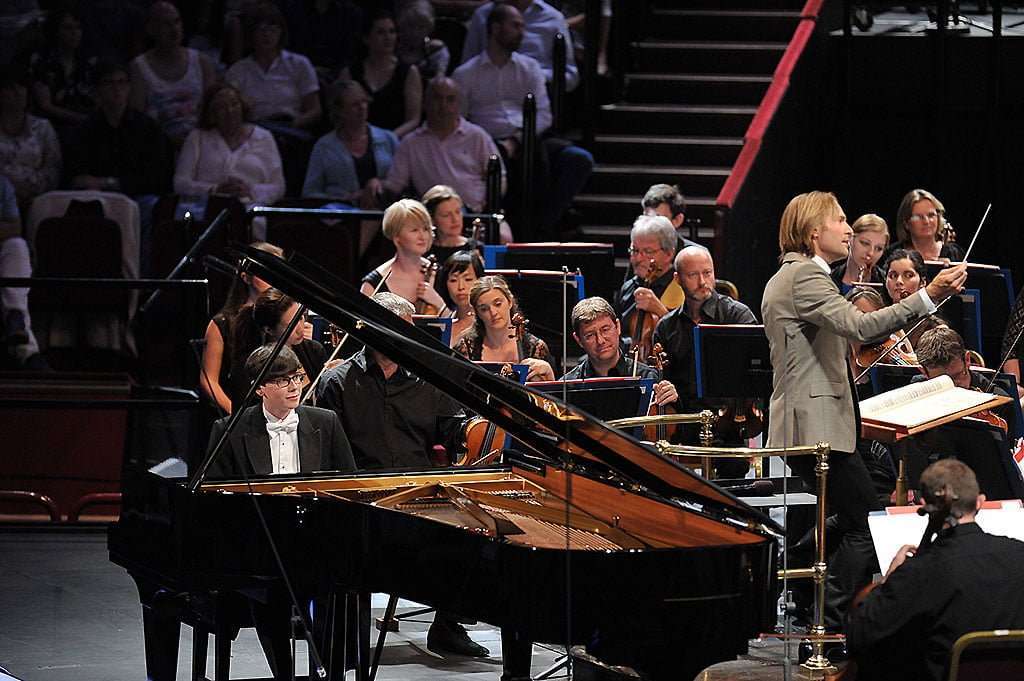 Just over 90 years old, George Gershwin’s Paul Whiteman-commissioned Rhapsody in Blue (in Ferde Grofé’s concert-hall orchestration, he made at least three for different ensembles including the original jazz-band version) came next, welcoming 2014 BBC Young Musician of the Year Martin James Bartlett, in white tie and black tails, whereas the orchestra members were in simple black, and Whitacre was in tailored grey jacket with impressive black lapels. You wished Bartlett had sight of the photo of Gershwin in the programme – pipe in mouth and sporting a spotted shirt. Maybe the full concert garb constrained his performance: he’s had all the right notes and in all the right places, but there was no sense of abandon. Hopefully that will come in time, as will etiquette – no handshake with the leader (eventually, after the performance, a brief nod).

Whitacre needs a few lessons in that, too. It is customary after a performance of Rhapsody in Blue to single out the clarinettist that opens the work. Only after he and Bartlett had departed the stage did the orchestra express its appreciation of Katherine Lacy’s wonderful upward glissando, ending in a fabulously throaty, gruff manner that is exactly what this indirect homage to the bustle of New York demands – and she was persuaded to take her deserved solo bow.

Being American, it was no surprise that Whitacre would want to make amends, and he did so with some aplomb after the second-half opener, Aaron Copland’s languorous depiction of another urban landscape, Quiet City. Despite distinguished cor anglais and trumpet solos (standing proud from the strings) from respectively Amelia Coleman and James Fountain, this was – unfortunately – anything but quiet, as the audience made itself all too audible, not least locally with a box of young people behind this reviewer’s seat. But Whitacre did name-check both soloists for the Copland and remembered to single out Lacy, who responded with a brilliant smile.

The final two works were Whitacre’s own. Equus has grown from a wind-band piece to one for orchestra, and then with chorus. Almost completely composed around the notion of ‘five’ (but as well as five beats in the bar, in Whitacre’s mind he can use 3/2 – as 3+2=5), it tickles and bemuses the ear by its shifting patterns, now overlaid by Morricone-style vocal lines – I only missed the ‘OOOeeeeOOOeeeeOOO Wah-Wah-Wah’ from The Good the Bad and the Ugly.

Audience participation was actively requested in the final work, the UK premiere of Deep Field, a work that has perhaps been brewing in Whitacre’s creativity since NASA set up the Hubble Space Telescope in 1995, and – over the next few years – the scientists were able to digitally manipulate the lens that had originally blurred the photographic results. Only with the correction did the first clean images come back and show, in what had previously been thought to be an empty part of space called Deep Field, a multitude of light sources. 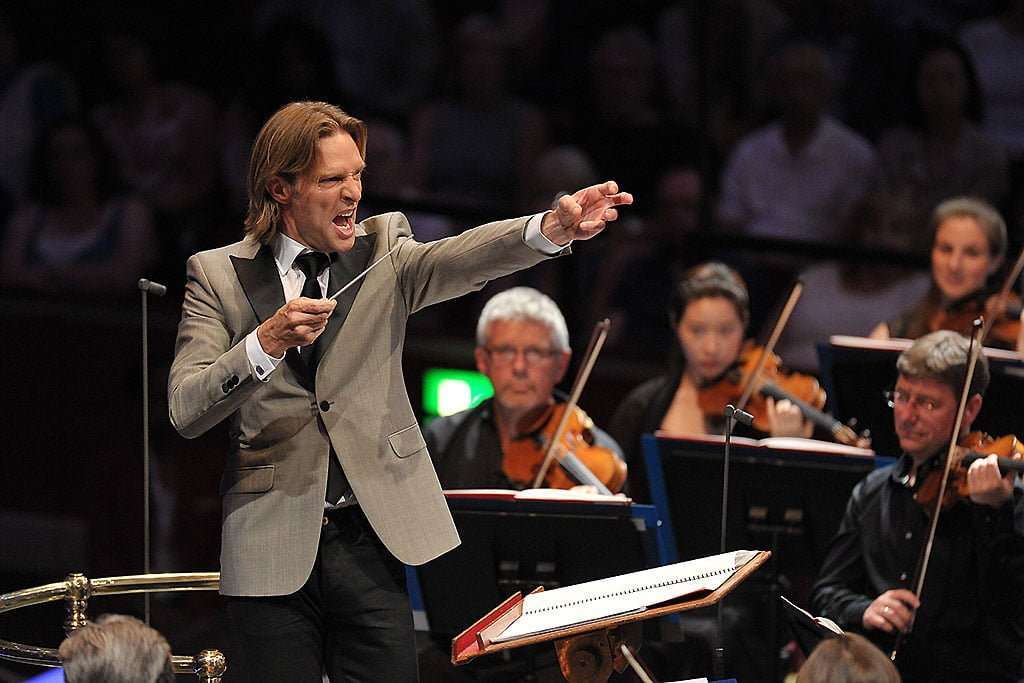 It wasn’t stated as a 20-year celebration of the telescope, but Whitacre’s slowly unfolding Deep Field could be just that. Extremely impressive in his sticking to a slow tempo, the ebb and flow, weave and waft of orchestral lines depicting the vastness, coldness and awesome nature of space could be seen to have come directly from Holst’s The Planets, an effect enhanced by the wordless chorus (here men as well as women) that filed down the seven stairways of the Stalls – at least eighteen singers in each. When Whitacre turned round to bring in the chorus he pressed his palm as the signal to those who had downloaded the eponymous smart-phone app, to create an additional eerie atmospheric noise, faintly audible.

For the final four minutes we were able to contemplate the stars and the magnitude of the universe as the chorus died very gradually away. Of course, that was the time for a small child to make its presence felt from one of the loggia boxes, a mewling that immediately reminded of the final shot of 2001: A Space Odyssey as the baby appears in earth’s orbit…

Deep Field was very effective, the app technology not a gimmick too far, and the Royal Philharmonic was on great form. Curious then that Whitacre, although getting the orchestra to its feet once, then seemed to ignore these musicians, even when bringing chorus-master Stephen Jackson on and indicating the chorus (still standing) throughout the stalls, several times – a shame that the RPO couldn’t have been asked to again share the applause.