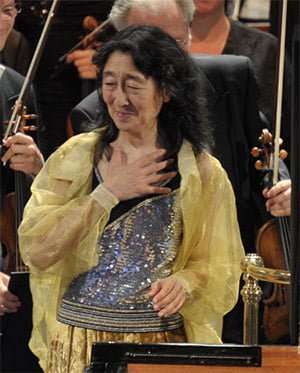 Strange to relate that some people, in Bristol to be precise, are knocking the traditional concert and questioning its time-honoured place in society: it suits their agenda while also scoring an own goal in attacking their own. Here in London, on this night, several thousand people (anyone and everyone) filled the Royal Albert Hall to capacity for this Prom – content to be informal yet respectful and to simply listen to the music and let their eyes look at whatever they chose: no spoon-feeding, no tricks, no big screens – nothing really, which equates to no distractions. There will be more on this … meanwhile back to the barn.

It wasn’t plain-sailing though (and I may be in a minority of one, if pleased for the majority). First of all an overture would have been nice, something to set the scene (Weber’s for Oberon, say), to warm the orchestra, to warm the ears. Instead we were marooned with Mitsuko Uchida as she opened Beethoven’s Fourth Piano Concerto – not so much a masterpiece, more a miracle. She was gently confiding, promising much. Mariss Jansons entered into the spirit with a sensitive response through his orchestra but was then prone to overly highlight woodwind details. The tempo for the first movement was well-judged, the musicianship of a high order, yet we weren’t travelling, or exploring, or on a poetic high. It was all worked out, too worked out (maybe that was the problem, and Uchida’s odd fluffs and awkwardness mattered more than they should have done). Some of the impulses sounded studied, the first-movement cadenza (the more-usual of Beethoven’s two: Brendel and Gilels used to make so much of the alternative one) wasn’t the emotional release it can be. The confrontation of the slow movement, curt strings quelled by the pacifying piano, was also too calculated, there was no tingle factor, and not much humour in the finale. 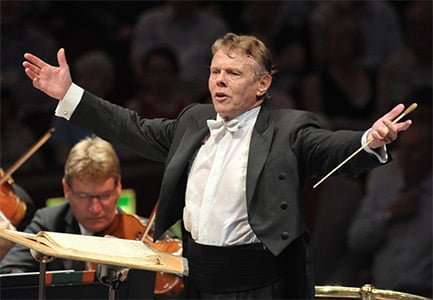 Berlioz’s Fantastic Symphony (with ten double basses) was similarly well-plotted yet inconsistent. The first movement was terrific – suggestive, volatile and refined, fastidious in preparation, but the succeeding waltz was just a little inelegant in turning corners and the spurt to the finishing post seem contrived. The central ‘country scene’ simmered nicely and the cor anglais and off-stage oboe exchanges were well managed both as dialogue and as perspective. Anyone who noticed that four percussionists were missing would have presumed that they were hanging around the Gallery for a few seconds of timpani-produced thunder (Jansons similarly did that here with the Pittsburgh Symphony in 1999). With that complement returned to their mates, and the second timpanist now required, I parted company with Jansons and his way with ‘March to the Scaffold’, a decent enough moderate tempo but he toyed with the music, vulgarising it, and lost its implacable nightmarish tread. The ‘Witches’ Sabbath’ finale needed to be let off the leash more, and there seemed to be some tweaks on the conductor’s part.

But this was an occasion not to worry overly about otherwise-important matters. The crowd, whether sitting or standing, loved it and didn’t need extra-musical stimulants to give an ovation. The BRSO is a top band, Mariss Jansons a top conductor (and, having interviewed him, a very nice man). So, this concert didn’t work for me, save in patches, but no worries, and I am more than happy to take a back seat (funnily enough that’s where I was sitting!) and salute this no-frills musically-focussed evening that was much appreciated by the many who came along.

Ah, but the encores stole the show. Uchida was spellbinding in the ‘Sarabande’ from J. S. Bach’s G major French Suite, and the orchestra and Jansons were sensational with their extra, a seeming re-write of Enescu’s Romanian Rhapsody No.1 infiltrated by subversive elements – it could only be the finale of György Ligeti’s Concert românesc, a very early work of his. This excerpt from it was thrilling in this fabulous performance, the BRSO’s one-of-four Concertmasters Anton Barachovsky a gypsy violinist to his bow and fingertips. This Ligeti snippet was last heard at the Proms during the 2006 Season in a similarly unadvertised context from Jonathan Nott and the Bamberg Symphony Orchestra, equally scintillating.