Beethoven’s ‘Eroica’ Symphony and Stravinsky’s The Rite of Spring are often presented as giant musical leaps for mankind. Perhaps no less remarkable is the musical distance travelled between Beethoven’s Fifth and Berlioz’s Symphonie fantastique. Just 22 years separate the two works, 1808 to 1830. This Proms pairing was appropriate in another way. Beethoven’s work, with its prominent piccolo part, echoes to the drumbeat of the open-air music of the French Revolution whilst Berlioz’s grotesque ‘March to the Scaffold’ and subsequent descent into madness in the ‘Witches’ Sabbath’ evokes the horrors of the Revolution and its aftermath.

We have grown accustomed to experiencing Beethoven’s Symphony in massively affirmative performances by the great conductors of the past, our view of it conditioned by the sound and nationalistic ethos of the late 19th-century. The truth is more complex. Sir John Eliot Gardiner’s account was ultimately just as affirmative although it is open to question whether, even with a ‘period’ orchestra as good as the ORR, the loss of tonal weight is really compensated for by more authentic timbres, especially in so vast a space as the Royal Albert Hall. The blazing brass and characterful woodwinds came across well but there was a distinct lack of Heft to the string sound. One suspects that for once this was a concert which may have sounded better on air than in the Hall.

The opening Allegro was con brio indeed but the crucial distinctions between f and ff were rather muddied. The oboe’s cadenza was eloquently despatched at a true adagio by Michael Niesemann and this was a portent of some delicate and stylish wind-playing in the succeeding Andante con moto. The Scherzo (played twice) opened in appropriately shadowy fashion before some gloriously brazen horn contributions; however the sepulchral descent into the link with the Finale was a little like viewing a well-loved picture through the wrong end of a telescope although the eruption into the last movement brought some tremendous playing from the trombones and huge energy from all. Still, this did little to erase memories of more-traditional big-orchestra performances. 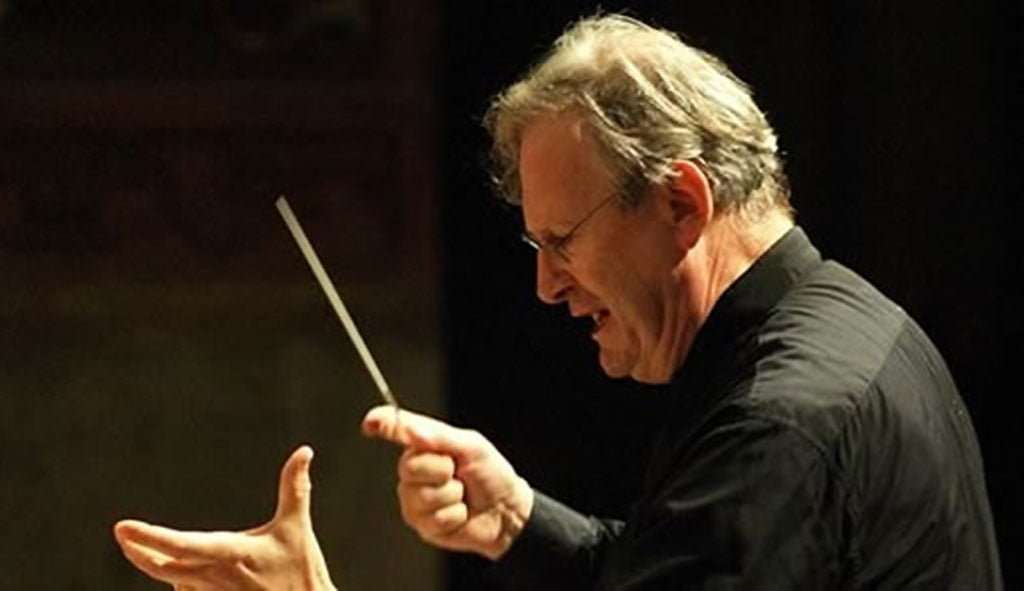 More successful was Hector Berlioz’s extraordinary work, possibly because it calls for a larger orchestra, possibly because timbre and colour are all-important and the ORR can field ‘lost’ instruments such as the ophicleide (à deux) and a serpent as well as cornets and no less than four harps.

This was outstanding (with, as in the Beethoven, all repeats observed) and if one mentions a few small caveats this in no way should be taken as detracting from the overall achievement. Firstly, in the introductions to the first movement and the Finale, Gardiner seemed reluctant to let the music expand and express, keeping it on a tight rein. Secondly, the pauses between movements, especially when the harpists were brought to the fore for ‘Un bal’ and seated around the conductor, were disruptive. Lastly, the use of a church bell in the Finale, booming and intrusive, sampled and amplified through the Hall’s speakers, will have been controversial to purists (personally, remembering all those horrible out-of-tune bells from other accounts, it didn’t worry this listener and the ‘Witches’ Sabbath’ is, after all, intended to be phantasmagoric.

Apart from that one has little but praise. ‘Un bal’, with cornets to the fore (including the ad lib part), became an almost different movement, very French-sounding. ‘Scène aux champs’ was utterly magical in its stillness although one has heard the thunder of the timpani even more sinister. ‘March to the Scaffold’ – with its braying, louring brass as the tumbrils rolled and the crowd roared its bloodlust – was utterly chilling. In the concluding ‘Witches Sabbath’, a tour de force, Gardiner let the woodwinds loose, Timothy Lines’s clarinet leading the unearthly celebrations with manic glee.

Would that the audience had been on the same exalted level. Poor Sir David Attenborough, seated next to me, was struck on the knee by a thoughtless man in front swinging in his seat, then a man behind me (in a box) ate crisps noisily at the hushed end of Berlioz’s slow movement, and the couple on the other side of me pawed each other throughout and swigged iced drinks. That was a nightmare come true.