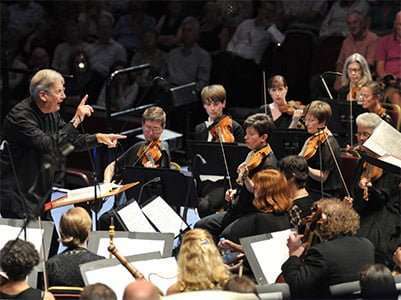 These two works effectively take up the Christian story where the St Matthew Passion left off, and cover the subsequent triumphant events in the life of Christ which were fundamental in establishing the religion that bears his name. It was good to see the Royal Albert Hall nearly as full for this late-night Prom as for many of those held earlier on in the evening.

Sir John Eliot Gardiner and his ensemble have lived with these pieces for a long time (Gardiner first conducted the Ascension Oratorio at the Proms in 1971), not least as supplements to their Bach Cantatas Pilgrimage, and so we may assume that their vision of these oratorios is the product of considerable reflection and insight. These performances seemed to communicate the perspective of an individual believer, cogitating on the significance of the events related for his or her own private relationship to God, rather than functioning as public acts of ecclesiastical ceremony commemorating world-changing events. (This would accord exactly with Bach’s own devout Lutheran outlook.) The soloists tended to sing their arias thoughtfully, as though to themselves (insofar as the Royal Albert Hall permits), rather than standing in the place of the preacher in the pulpit. Also, the choruses framing both works – apparently more extrovert in form with their three trumpets and drums – were graceful and dignified, not proclaiming or evangelising. 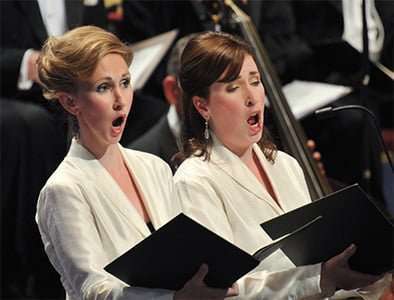 Elegance came through with the poised and precise projection of the dance rhythms which are evident particularly in those choruses, though certainly there was insistence on the exhortations “Kommt, eilet und laufet” (Come, hasten and run) in the opening chorus of the Easter Oratorio. This work is not simply a joyful celebration of the Resurrection, but a meditation in which the soloists ponder the consequences of this mystery for the fate of the human person at death. In ‘Seele, deine Spezereien’ Hannah Morrison was calm and composed, any anxiety already stilled by a recognition of what the Resurrection entails. The tenor then muses that in its light, death will be gentle. The soft lullaby of the rippling strings and flutes in ‘Sanfte soll mein Todeskummer’ had no very perceptible beat, but that was deliberate so as to create a consoling smoothness of texture. The aria ‘Saget, saget mir geschwinde’ might have elicited more urgency from Meg Bragle, but it was left to Peter Harvey to proclaim trenchantly that Jesus lives again and that this is a cause for joy. The final chorus remained stately and unflustered, though with some slight rasping from the trumpets.

There was possibly a little more exuberance in the choruses bookending the Ascension Oratorio, but the interpretation of this work remained generally steady and contemplative. The Christian soul expresses itself in the arias given to the soprano and alto voices and the emotional centrepiece of this performance was ‘Ach, bleibe doch’ (adapted by Bach from the same source he also used for the ‘Agnus Dei’ of the Mass in B Minor). Particularly in the middle section, Bragle sang with a deeper, more 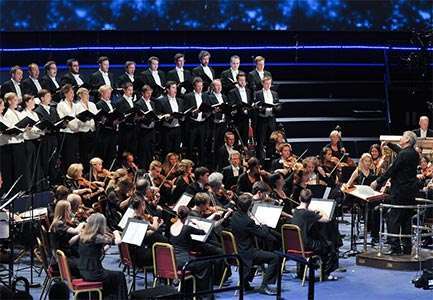 full-throated tone that expressed regret and woe. But throughout there was an intensity of delivery as though it were addressed to a close companion or lover. More narrative is related in this Oratorio than in the one for Easter, and this was discharged with dramatic urgency by Nicholas Mulroy as the Evangelist, and Harvey. Furthermore the imagined congregation is given a look-in with the chorale inserted in the middle. In this performance the Monteverdi Choir effected a gradual crescendo across the solemn statement of the verse, intensified by the flutes’ atmospheric doubling of the melody.

An appropriately airy instrumental texture was created in ‘Jesu, deine Gnadenblicke’ with flute, oboes and upper strings, as the text dwells upon the love that is the legacy which Jesus leaves behind. Where the solo bass initially expressed a trembling worry at Jesus’s departure in the recitative ‘Ach, Jesu, ist dein Abschied schon so nah?’, the chorus gave a bold, confident statement of the closing chorale, without any fear of the doom and judgment usually associated with the Second Coming, which is already anticipated in this verse. The accounts of both Oratorios was compelling and consistent, whether one chooses to see them simply as exquisite music or as an enacted religious experience.