“A dynamic meeting of musical cultures as conductor Jules Buckley brings together the BBC Symphony Orchestra with leading performers from the UK’s vibrant urban music scene. In Urban Classic’s experimental fusion of musical styles, high-octane orchestral showpieces by Mosolov and Henze rub shoulders with rap, R&B and soul. ‘It’s a culture clash,’ says Jules Buckley. ‘We’re taking artists from different worlds and messing with their music, putting it in an orchestral context and exploring it in a new way.” [BBC Proms website]

Mosolov
The Foundry
Henze
The Bassarids – Hunt of the Mænads [arr. Buckley] 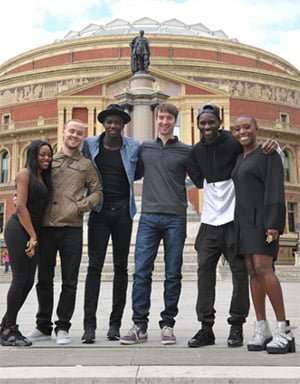 A crime was committed at the Royal Albert Hall tonight. A crime against sound. And we don’t need Doctor Who’s sonic screwdriver to find the culprit. AMPLIFICATION (is that loud and distorted enough for you, with tinny strings in the sound mix?).

At the risk of sounding like a broken record: why, oh why, if you have a 90-piece orchestra (and one as good as the BBC Symphony), do you destroy it with amplification? Oh yes, the engineers will tell you they can’t make it work when voices and certain instruments (electric guitars, synthesisers) are also amplified. I don’t buy that for a second: John Adams, for example, uses such instruments and he doesn’t need amplification for the rest. In any case, the two ‘classical’ pieces (opening each half of this Urban Classic Prom) have no electronic additions, so why were the Mosolov (performed ‘normally’ at the Proms in 2010, Philharmonia/Salonen) and Henze’s operatic excerpt (the latter arranged by Jules Buckley to cover for not having all of the required instruments available) amplified? Seeing an orchestra playing its socks off, but hearing the sound out of speakers above the stage is one of the most dispiriting sensations. 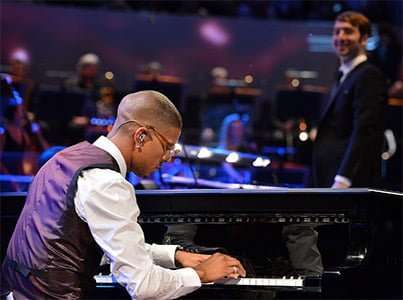 So before we even get to the performances we are met with a simple fact: in presentation the BBC Proms let itself down badly here. The ethos was to introduce the Proms to a new audience who like ‘Urban’ music – and indeed the audience was a different mix to most other nights during the summer festival, especially the screaming Fazer fans at the front of the Arena (high-pitched squeaking emitted every time Fazer’s name was mentioned). But unfortunately they got no sense of the quality of an orchestra from the amplified wall-of-sound they got (and are presumably used to). There was no depth to the aural perspective; no chance to revel in the gradations of sound that are embodied in the very layout of an orchestra and the timbre of different instruments. It was presented in the audio equivalent of 1D instead of the 3D we know works most other nights both in the Royal Albert Hall and elsewhere. An opportunity, then, to show the intrinsic quality of an orchestra to a new audience, but lost to an ubiquity of decibels. 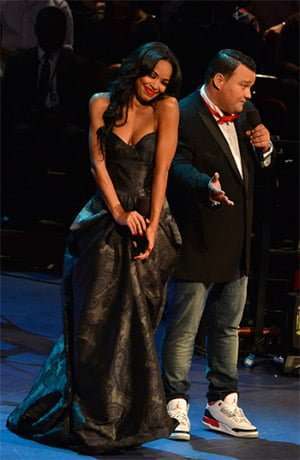 Presumably necessitated by the almost-live broadcast on BBC Three (a 90-minute version ran from 9 p.m.), the concert was presented by Sarah-Jane Crawford and Charlie Sloth. The ‘repartee’ was embarrassing (especially when it veered towards Sloth stalking one of the singers). His adulation of Jules Buckley and the repetition (by both presenters and singers) of “are you enjoying yourself?” was almost tantamount to a lack of confidence in what was being presented. That even bled through to the printed programme – a simple fold-out affair with not even a Proms number (37 if you’re counting), and no introduction about what ‘Urban’ is. I still don’t know, and had gone with an open mind.

Having said all that, the six artists that each appeared a couple of times in solo items, before coming together for the Bob Marley classic ‘One Love’, did seem to take proceedings seriously. They were incredibly smart and well presented (not OTT) – I particularly liked Wretch 32’s first shirt (white with printed black braces) – and essayed their songs with some panache. I did wonder whether Maverick Sabre one day could cover George Formby’s ‘When I’m Cleaning Windows’: his left arm (a bit like conductors Masur and Noseda) seems to have an independent life of its own: put a cloth in his hand and he’d get through the Shard’s carapace in no time! Be-hatted Jacob Banks, like Wretch 32, tall, slender and dapper in black, and Fazer (another squeak from the front-row Prommers) took the forestage with aplomb and in the second half Fazer introduced the seven young charges he’s been mentoring for the last ten weeks, to perform the titular number ‘7 Chapters’, impressing as much with their enthusiasm as musical ability. 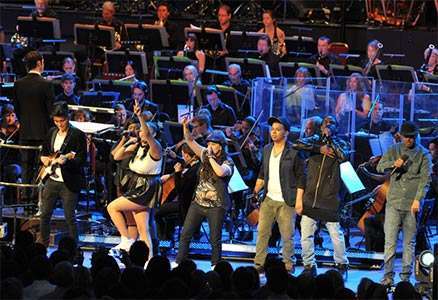 Best of all were the ladies: first the ball of energy that is Lady Leshurr. Her motor-mouth word delivery might have been difficult to follow, but she was the one that managed to get the crowd going, especially with her Labrinth cover ‘Let the Dogs Run Wild’, given a stadium-thumping souped-up arrangement by Ben Cottrell. By contrast, the haunting lyrics of Laura Mvula, especially ‘Father, Father’ (surely too intimate for the Royal Albert Hall, but with a brass chorale to start that certainly set an appropriate mood) brought a sense of stillness to an otherwise hectic evening.

While it would be great in future for our Urban stars to adopt time-signatures other than 4/4 – a complaint that could be levelled at every style of pop(ular) music – there would have been so much to enjoy if the amplification problem could have been solved in advance. And a nod too to the backing singers – Vanessa Haynes, Brendan Reilly and Natalie Williams – who brought a consistent and communicable enthusiasm to proceedings. The orchestral arrangements – not only by Buckley and Cottrell, Tom Richards, Jason Yarde and Tom Trapp – were more difficult to judge given the amplification. Hopefully any one of them in future may have the strength of conviction to try to make things work better acoustically.

There was an incessant reminder that this was a “unique” event – the “first ever Urban Classic Prom”. Let’s hope it is unique. Urban is welcome back, but the presentation needs to come up to Proms standards. The challenge has been set…