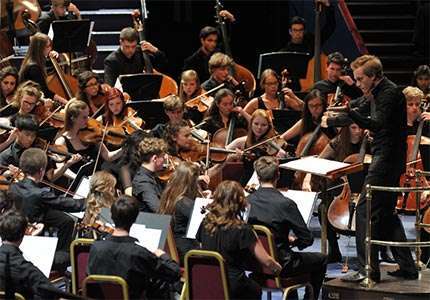 This was the first free main concert in the history of the Proms, and it marked the 200th-anniversary of the Royal Philharmonic Society. Suitably, the main work was probably the RPS’s most famous commission, prefaced by one of its more recent, and the RPS further put its stamp on the concert by having the bust of Beethoven displayed at the front of the platform.

Prefacing the two commissions came Vaughan Williams’s Toward the Unknown Region, an early work composed around the same time as the much more substantial A Sea Symphony, both having Walt Whitman in common. Whitman’s epic verse about the renewal of the soul is draped with similarly visionary music from the composer, with a reminiscence of Parsifal in the poetry’s pre-occupation with time and space. The 150-strong choir made the setting shine and resonate in a way that would have satisfied the co-creators’ ecstatic yearnings, underpinned by luminous playing from the NYO, which, with Vasily Petrenko’s guidance, abandoned hushed discretion in the monumental closing pages, with earth-shaking beef-up from the organ. 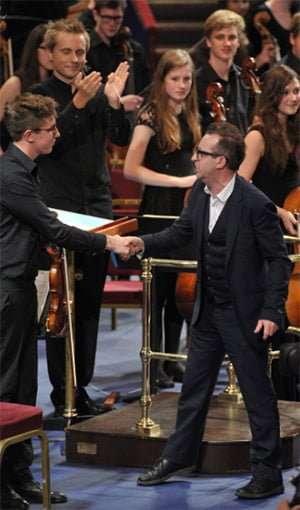 There was an element of granny’s footsteps in Mark-Anthony Turnage’s new 20-minute piece, inspired by Klimt’s sequence of Secessionist friezes in their turn inspired by the finale of Beethoven’s ‘Choral’ Symphony. The four movements – the first two with respectively “Hushed and expansive” and “With veiled menace” performance indications and precise metronome markings; the last two just with metronome markings (which could have been a dig at Beethoven’s involvement with that keeping-time machine) – ghost processes at work in the ‘Choral’ in particular and Beethoven symphonies in general. The orchestral writing is sectionalised and is full of Turnage’s characteristically abrasive touches – an astringent trumpet solo in the first movement, a grunting horn effect that gives the second movement its initial bounce. His preoccupation with/dependence on jazz and blues was omnipresent, there were moments in the second movement that could have easily segued into The Firebird, and the touching violin solo in the slow third movement inverted one of the themes from the Ninth’s Adagio. The music strikes a neat balance between respectful homage and sly parody, with passages of visceral activity that couldn’t help but impinge on the senses. The last time I was moved by Turnage’s music was in his opera The Silver Tassie, but there wasn’t that level of engagement in Frieze (and I did wonder if the title itself might be a pun), however cleverly written and enigmatic. There was something of a heads-down quality to the playing, which suited Turnage’s muscular and defined feeling for rhythm and syncopation, but otherwise felt a bit constrained. 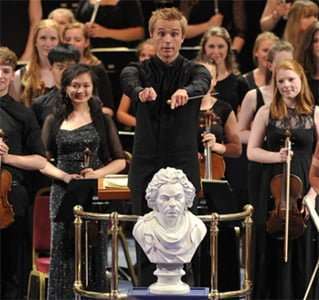 Petrenko, the NYO’s current principal, wisely preferred flowing tempo for the ‘Choral’ Symphony to the benefit of some admirably integrated ensemble and with the avoidance of orotund exaggeration, and which piloted it away from sounding exclusively like the icon of epic significance it so often is now. The scherzo sizzled with lithe, youthful energy, with an astounding degree of rapport emanating from the players, and its teasing coda came across with decisive wit. Petrenko injected a pleasing, ironic ambiguity into the beery beginning of the finale’s march and shaped the movement’s momentum with a bracing sense of inevitability. The four vocal soloists (with Ailish Tynan and Toby Spence late replacements for respectively Lisa Milne and Andrew Kennedy), placed between the front of the chorus and the back of the orchestra, fielded fine contributions from Gerald Finley and Spence, and at full tilt it was impossible to avoid Tynan’s operatic soprano. The thrilling sound of all those young voices at full throttle in Schiller’s Ode to Joy summed up the excitement that the best performances of this work can generate. For a free concert, the audience certainly got its money’s worth.