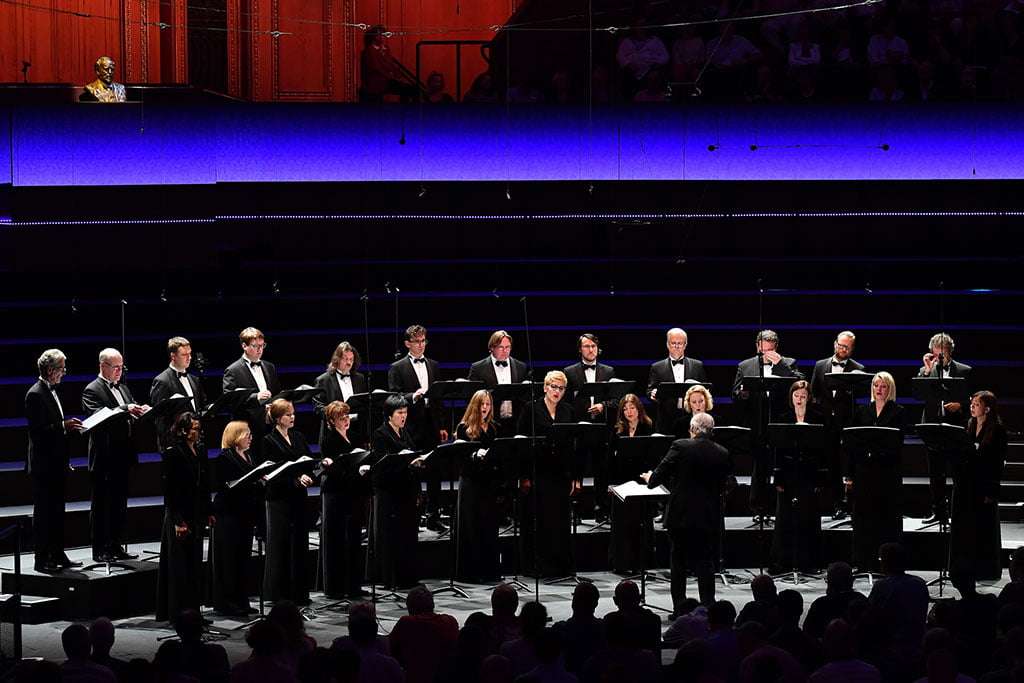 Following its brief contributions to Prom 37 earlier in the evening, the twenty-four-piece Latvian Radio Choir and Sigvards Kļava returned to the Royal Albert Hall for Rachmaninov’s All-Night Vigil, sometimes referred to as Vespers. This was something special as bell-like tenors and resonant super-basses – basso profundo – stole the show.

Dating from 1915, Rachmaninov’s Opus 37 makes up the Ordinary of the All-Night service, which consists of the offices of Matins, Lauds and Prime as well as Vespers. Alongside his The Bells (setting Poe in a Russian translation), All-Night Vigil was the composer’s favourite work, the fifth movement of which (the ‘Nunc Dimittis’) he wished to be performed at his funeral. At the end of it, the basses sing a descending scale down to B-flat below the bass clef. When the composer first played it to conductor Nikolay Danilin (who led the first performance), he shook his head, saying “where on earth are we going to find such basses? They are as rare as asparagus at Christmas!”. Modern times mean that, like Yuletide asparagus, choirs with basses able to sing these very low notes are more common. Nevertheless, the All-Night Vigil remains a notoriously difficult piece to perform, and the Latvian Radio Choir did so with aplomb.

Of the fifteen movements, the first six make up the Vespers. Next follows Matins and a powerful ‘Glory to God in the highest’ in which the Choir relished a brief moment of chime-like singing on the reiteration of “Slava”. The third section, Lauds, is just one movement and, as a climax to the whole, is more familiarly heard in the Christian Gloria setting, “Glory to God in the highest, and on earth peace.”

The final three movements make up Prime together with a setting of a Hymn to the Virgin. Rachmaninov again pushes the voices to extremes, here with a very high tenor part for “Though hast risen from the tomb” – a thing of beauty from the Latvians.

Seemingly a natural choice for a late-night Prom, the All-Night Vigil has made only three previous appearances – the most-recent in 2008, by the Estonian Philharmonic Chamber Choir and Paul Hillier. With a performance of the quality heard in 2017, hopefully this hypnotic, trance-inducing masterpiece will reappear at the Proms soon.