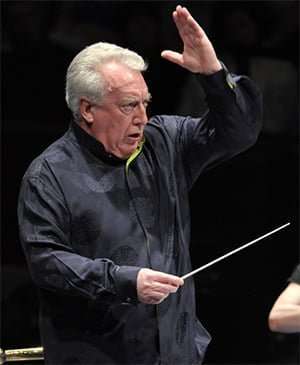 If any link were to be sought among the strands of this programme, it must surely be extra-musical and relate to the incidental connection (in this context) between England and India through the British Empire. The theme of the night also associates Nishat Khan’s Sitar Concerto and Vaughan Williams’s Second Symphony, but it is not clear whether this is a deliberate parallel. In any case, there are barely any musical affinities, even though London was the beating political heart of the Empire when Vaughan Williams completed his Symphony (in its first version) in 1913. And Gustav Holst’s tone-poem does not reflect any eastern musical influences either, drawing only dramatic inspiration from Hindu legend which mythologises a problem England rarely has to worry about: the need for rain to avert drought in a scorching climate.

Indra relates an episode from the Rig Veda about a confrontation between the eponymous god of rain and storm, and an evil dragon, Vritra, who has caused a devastating drought. The music perhaps owes something to Wagner and Richard Strauss with its lustrous strings and bold brass fanfares, heard near the beginning and brought off excitingly by David Atherton and BBCNOW. Atherton pursued a generally gripping account of the score’s drama, though the transformation of the prevalent four-note motif to symbolise the fall of the much-desired rain at the end was not quite magical enough, exacerbated by a lack of glockenspiel sonority (which is heard in JoAnn Falletta’s fairly recent recording on Naxos). 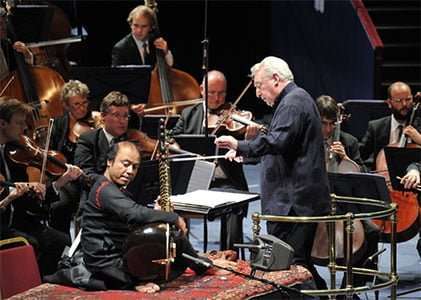 Nishat Khan has appeared at the Proms twice before, but this was the first time that a notated composition of his own has featured. In The Gate of the Moon, the sitar takes the part of a mystical “unknown traveller” who journeys through the night and encounters a beautiful princess, whereupon a love story unfolds. The Concerto proceeds less through thematic development than a sequence of many sections, contrasted with each other by changes in mode, and to some extent rhythm, texture and instrumentation. They are grouped loosely into three movements. Superficially the music may sound linear and disparate, but it is drawn into an artistic and compelling unity by means of its strong, unyielding rhythmic drive.

The work begins with a rocking theme which oscillates alternately between two different intervals of a third before giving way to the entrance of the sitar and a shifting sequence of many other motifs and rhythms, often reiterated obsessively but not menacingly. To that extent the music may bear some resemblance to minimalism. The use of different Indian ragas and modes could also be seen to forge some connection with much of Vaughan Williams’s modal-infused music, but this is probably more coincidence than direct influence. Moreover the interlocking thirds, and a theme which strains upwards to a sharpened seventh in the first movement of Khan’s Concerto, create a different mood from that of A London Symphony, permeated by the interval of a fourth.

Atherton set an ideal pace throughout this 47-minute performance from which BBCNOW did not flag, and so maintained a buoyant character which was moulded into something more romantic and sensuous in the second movement, and instilled with mounting urgency at the end of the third. Khan’s playing emerged from and receded into the textures like the mysterious traveller the sitar was meant to represent. Although his performance cohered exactly with the mood and tempo of the orchestra, it also embodied a sense of autonomy from external constraints, not least by the resonance of its sympathetic strings outlasting all other tones, and by the increasingly virtuosic strumming towards the end, compounding the impression of a source of dynamic energy whose origins are unfathomable.

Ralph Vaughan Williams’s A London Symphony also begins and ends in the night, apparently charting a series of scenes in London over the course of a day (if we are to set any store by the composer’s various programmatic notes and comments). In this performance the manifestations of London’s hustle and bustle were very real and hefty, particularly the crowds and traffic unleashed in the first movement, and as the wearied march trod its way in the last movement. But following on from the Sitar Concerto, Atherton perhaps wanted to find a more mystical meaning in the Symphony too. A very still manner in the opening representation of dusk and the nocturnal panorama of London at the end framed quite a fluid traversal through all the intervening incidents and moods, such that even the mighty sprawl of London’s cityscape seemed to pass like a fleeting vision in the greater expanse of the night. We heard the composer’s final revision from the 1930s.

I sometimes think of Wordsworth’s Sonnet “Composed upon Westminster Bridge” when listening to this Symphony, given the poem’s description of the sublime vista of London at night, but this performance drew a far more desolate picture of the city such as to make this inappropriate. That was particularly so in the slow movement, with the doleful performance of the opening cor anglais melody, melancholic strings and a stoical climax. Far from a quiet idyll in the midst of the city – a sort of urban equivalent of the Fifth Symphony’s ‘Romanza’ – this spoke of alienation and loneliness, though it was a shame that the horn melodies occasionally ended slightly flat. Likewise the drawn-out sigh at the beginning of the finale was not merely the weariness of a tired worker trudging back home but an existential cry of despair. The scherzo’s scurrying lines were nicely shaped in their ebb and flow, if a little short on humour, but this was at least consistent with the troubled interpretation of the Symphony as a whole.

Unfortunately a ringing mobile phone in the auditorium rather disturbed the quiet, introspective end of the Symphony for many in the audience – ironically competing for attention with Vaughan Williams’s distant evocation of the chimes of Westminster. More remarkably, an American voice even answered it. Such anti-social behaviour hardly needs further comment, except to say that one can quite see why Vaughan Williams might have despaired of city life. Despite that and in light of Atherton’s cogent conducting overall, perhaps the quietly radiant final bars of hopefulness were not entirely futile.